Three days after CNN slammed the dishonest ad from the pro-Obama Priorities USA super PAC that blames Mitt Romney for a woman's cancer death, Friday's CBS This Morning finally got around to covering it. But correspondent Nancy Cordes downplayed the liberal group's spot by also targeting a Romney ad that was "panned" by unnamed fact checkers, and claimed that "other Romney ads have taken Mr. Obama's words out of context."

Cordes also dredged up the famous and entirely accurate anti-Michael Dukakis Willie Horton ad from 1988 as an example of negative ads being "a hallmark of presidential campaigns for decades."

Are there no limits to where leftwing media members will go to bash Republicans?

On Monday, the Huffington Post actually published a front page article with the headline, "Michele Bachmann Pours Water For Men At GOP Primary Forum In Iowa":

On Tuesday's CBS Early Show, co-host Chris Wragge touted a new poll claiming people support unions over Republican plans to cut state deficits: "A new CBS News/New York Times poll shows that a majority of Americans, 56%, are opposed to cutting the pay and benefits of state workers to balance budgets while just 37% are in favor of it."

While Wragge called them "state workers," the actual poll consistently used the phrase "public employees," never state workers or government workers. On NBC's Today on Tuesday, pollster Frank Luntz explained how one phrase invokes a positive response while the other does not. Speaking to co-host Matt Lauer about the newly released CBS poll, he noted: "If you call them 'public workers' a majority of Americans respect them. If you call them 'government workers' a majority of Americans don't." Clearly, CBS and the New York Times selected wording that would elicit a response favorable to the liberal position on the issue.

We're All The Tea Party Now

Pollster Frank Luntz has an absolutely must-read op-ed in Sunday's Washington Post about what Tuesday's elections really meant, and what the real temper is in the country right now.

In it, he listed the governmental priorities held by 60 percent of the nation: 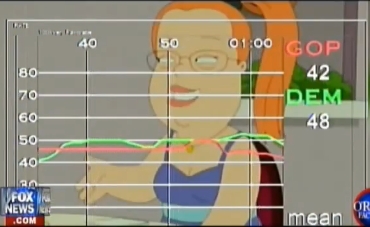 According to a focus group done by pollster Frank Luntz, folks that voted for Barack Obama liked the recent attack on Sarah Palin done by the cartoon series "Family Guy."

As NewsBusters reported almost two weeks ago, the Valentine's Day episode of the Fox hit featured a Down Syndrome girl saying that her mother was the former governor of Alaska.

This sparked a nationwide debate about whether this was just harmless satire or deeply offensive on a number of levels.

With this in mind, Luntz put together a focus group of thirteen folks that voted for John McCain in November 2008, and eleven that voted for Barack Obama, to gauge reactions to this segment as well as to how Palin responded to it.

Though obviously a very small sample set, the results he shared on Friday's "O'Reilly Factor" were staggering to say the least (video embedded below the fold with transcript, h/t Right Scoop and @Cubachi):

A Tale of Two Uninsureds: President Changes Number from 46-47 Million to 'Over 30 Million'

Apparently not much to President Barack Obama, who slipped a not-so-subtle change to a statistic he had cited previously different during his Sept. 9 address to a joint session of Congress. The president pointed out there are "more than 30 million American citizens" who are having difficulty obtaining health insurance (emphasis added).

"We are the only advanced democracy on Earth - the only wealthy nation - that allows such hardships for millions of its people," Obama said. "There are now more than 30 million American citizens who cannot get coverage. In just a two year period, one in every three Americans goes without health care coverage at some point. And every day, 14,000 Americans lose their coverage. In other words, it can happen to anyone."

After Giving Obama Round One, FNC's Luntz Gives Nod to Palin

With all the hysterical leftwing hyperbole about Fox News being a Republican talking points echo chamber, its post-debate coverage in the past week has been far more fair and balanced than others in the media.

Wouldn't it be nice if most other media outlets could be so fair and balanced as opposed to the predictable sycophancy we're witnessing elsewhere:

The key to the debate between Biden and Palin is to have it completely open. Becuase Joe Biden for the first 90 seconds is as good as it gets. He always makes the stupid comment at about two minutes and 30 seconds. [laughter]

CBS: Obama Has Chance to Be ‘Statesman,’ Show ‘Gravitas’

On Friday’s CBS "Early Show," correspondent Sheila MacVicar reported on Barack Obama’s upcoming international tour and declared: "...Senator Obama is taking to the skies to stride on the world stage. It's a chance for Americans to take a look at how he measures up as a statesman...it's an attempt to demonstrate he has the necessary gravitas to maneuver through diplomatic minefields, especially in the Middle East."

MacVicar then explained how well-received Obama’s troop withdrawal plan would be to the Iraqi people:

...people know he has proposed to withdraw all U.S. combat troops within 16 months. American presidents have not been popular here for nearly 20 years. But Iraqis say they do want U.S. troops to go home. 'I'm for withdraw now,' says this shopper. 'The Americans have caused all our problems.' 'If Obama's plan is true,' he says, 'we bless it. We need withdraw today.'

MacVicar then looked at the rest of Obama’s planned trip: "On to Europe where many are enthusiastic." She quoted one British citizen who claimed: "If there were a vote here in the UK he'd probably win something like 5-1." MacVicar concluded her report by observing: "There's no question...that even this far away Mister -- Senator Obama, more than any other recent presidential candidate, excites great interest." 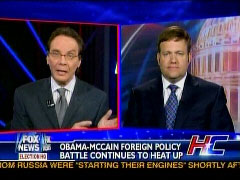 Wednesday's Hannity and Colmes showed viewers clips of Barack Obama making contradictory statements from Sunday and Tuesday about whether Iran was a serious threat, with the Illinois Senator on Sunday saying "they don't pose a serious threat to us," but on Tuesday saying "Iran is a grave threat." Pollster Frank Luntz also sparred with FNC's liberal co-host Alan Colmes over whether it would be wise to meet with dictators like Mahmoud Ahmadinejad an

Harry Smith: Hillary Will Boink Bill With Her 'Frying Pan'

By Mark Finkelstein | March 3, 2008 9:04 AM EST
Here at NB, we're not normally in the business of feeling sorry for MSMers like Harry Smith. But I can't help but express some sympathy for the Early Show anchor at the prospect of the feminist, Clintonite wrath that is likely to descend on his head after a comment he made this morning

Among the metaphors most likely to drive feminists up the wall is that of the angry woman yielding that symbol of domestic serfdom, the frying pan. But in discussing the prospect of Hillary's anger at Bill for his responsibility for her possibly impending defeat, Smith invoked . . . you guessed it. Harry was coffee klatsching with Dem consultant Joe Trippi and pollster Frank Luntz this morning, and it was the latter who first described Bill as a drag on Hillary's campaign. The issue was whether Clinton could stay in the race if she splits the Texas and Ohio primaries tomorrow.

JOE TRIPPI: I don't think she should get out if she wins Ohio and loses Texas but I think there will be pressure there.

FRANK LUNTZ: It didn't help her that her husband said that she's got to win both.

LUNTZ: Bill has been -- I feel sorry for him the night, if she does pull out, he should not be at the home in Chappaqua.

That's when a chuckling Smith put his foot in it, even providing the sound effects.

On Thursday’s CBS "Early Show," co-host Harry Smith introduced a fawning segment on Barack Obama: "On the campaign trail, Barack Obama is often treated like a rock star. People wait hours just to hear him speak." The segment did not focus on campaign strategy or policy, but rather it focused entirely on Obama’s rhetoric as correspondent Tracy Smith touted MSNBC’s Chris Matthews being "thrilled" by a speech from the Senator from Illinois:

TRACY SMITH: They come in droves, by the tens of thousands at times, to hear Barack Obama speak...With soaring rhetoric, Obama is moving his audiences not just politically, but emotionally. Even some political commentators who've seen it all can't help but gush.

CHRIS MATTHEWS: You hear Barack Obama's speech, my -- I felt this thrill going up my leg. I mean, I don't have that too often.