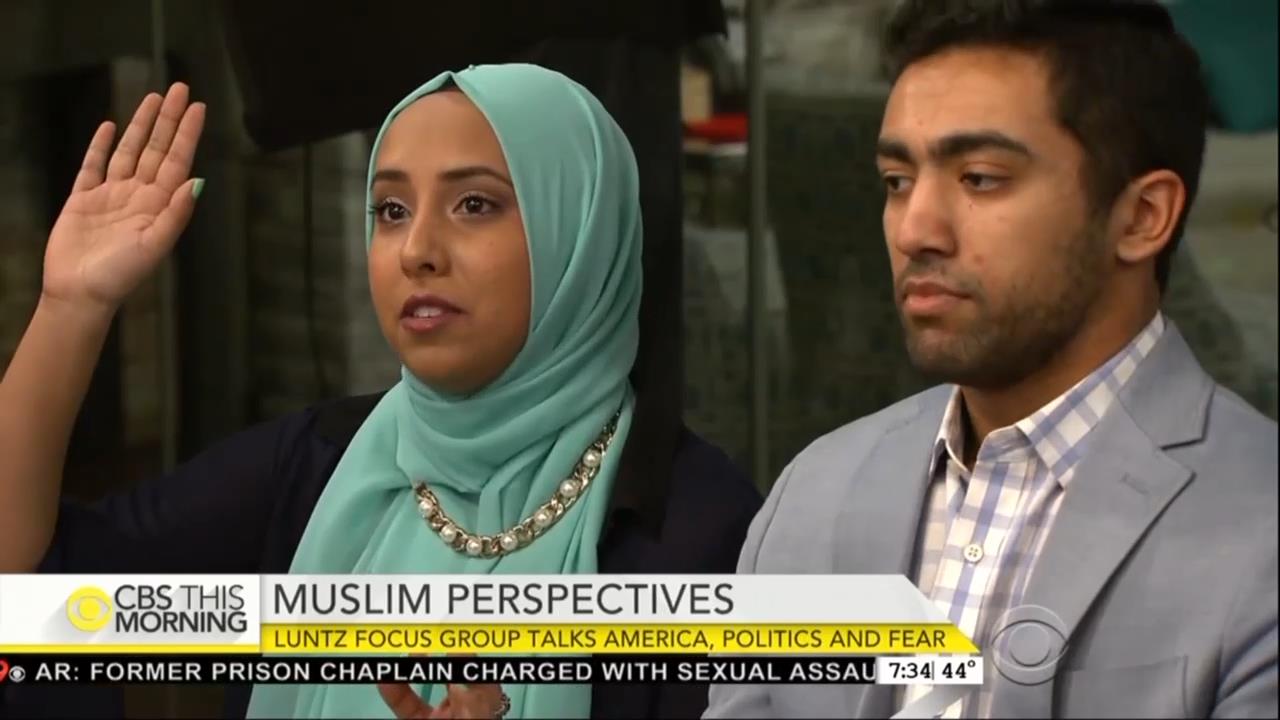 Zaid Jilani of the leftist website The Intercept is taking apart Friday’s CBS panel discussion on Muslims in America: “two Muslim Americans who took part in the group complained that CBS edited out parts of the discussion where they raised their own concerns — including critiques of U.S. militarism, surveillance and entrapment.”

They also said that Frank Luntz, “the right-wing pollster who led the focus group, silenced members of the group when they criticized discriminatory U.S. government policies.” They ripped into Barack Obama and Hillary Clinton, but CBS wanted its own tidy narrative of patriotic Muslims who have no problem with this president.

The focus group went for about an hour, and only four tightly edited minutes were aired on Friday. On Face the Nation on Sunday, they ran another four minutes -- some of it the same. What was different was Luntz demanding people use a phrase to describe Trump. "Worse than Voldemort," said one. "Psychopath," said another. This is what CBS wanted to show.

When Luntz asked the group how they respond to attacks such as the recent one in San Bernardino, New York City activist Amelia Noor-Oshiro (pictured above) told The Intercept she asked Luntz “Why don’t you ask that to people who actually commit acts of terror? Why don’t you ask that to White America who are responsible for a majority of domestic terror attacks?” That leftist talking point didn’t make it on air. (Noor-Oshiro was the one spouting CAIR statistics on air.)

He also had silenced me and other participants who have routinely brought up the fact the government has enacted in state violence against the Muslim community — whether that may be through entrapment cases and surveillance programs — and our concerns about institutional racism. He shut me down when I said that President Obama and Hillary Clinton has killed many Muslims under the administration when we were discussing Trump, and ironically for a GOP strategist, he shut me down when I talked about how Democrats have enacted some of the most deadliest and discriminatory policies against Muslims.

That would have been a much spicier segment! Harvard (her website here) found the CBS/Luntz treatment patronizing:

The edited version of the focus group interview was mainly about proving our American identity, condemning terrorism, and Trump's bashing of Muslim-Americans. This is problematic.

He kept saying how he felt bad that no one listens to Muslims and how he wanted to give us an opportunity to talk to the general population. But how can that happen when we're manipulatively edited to have us fit their own narrative and agenda?

Welcome to the network "news" -- make that a narrative. They put the Muslims in a little box that served their agenda...where little Muslim children shouldn't watch Republican debates:

In her interview with The Intercept, Harvard said that at one point during the interview she flatly told Luntz that she was “sick and tired of [talking about Trump] when we have other issues besides Trump.” Another question Harvard says Luntz asked that was not included on air was whether they recognized Israel as a Jewish state — "as if that was relevant to the American Muslim experience," wrote Jilani of The Intercept.

Harvard said Luntz clearly had an agenda. “He just wanted to create this narrative of how Muslim Americans are condemning terrorism.” Poor things. “He’s trying to put us in a positive light but in a way that makes us feel like second-class citizens,” she said.

Amelia Noor-Oshiro said that prior to being picked for the group, she was asked to fill out a survey that included one question about “approximately what percentage of the Muslim population would you think could be radicalized or are already radicalized?….It literally said write down a percentage!” Noor-Oshiro also says Luntz also baited her by asking her what “percent of white people” are racist. When she refrained from answering the question, he told her, “This is your chance!”

“I think a lot of people were very appreciative of the fact we even got a voice,” she said. “But I don’t think they understood this voice came with conditions.”

The Intercept noted that Luntz told CBS news anchors after the segment aired that the focus group had expressed  “very deep frustration that nobody’s listening to them,…that they are the focus of all sorts of conversations, many of them negative, and that they don’t have a voice. That they’re being attacked by the leading presidential candidate [sic] and no one is hearing a response. They were so grateful to be gathered in that room, to have a chance to speak out.”

As for his own conduct, Luntz said he was actually “trying to be diplomatic. I did not push as much as I normally do in these sessions, and the reason why is because I wanted the voice to be unedited.”