Luntz: Not 'Appropriate' for Media to 'Constantly Focus' on Conflict in Congress 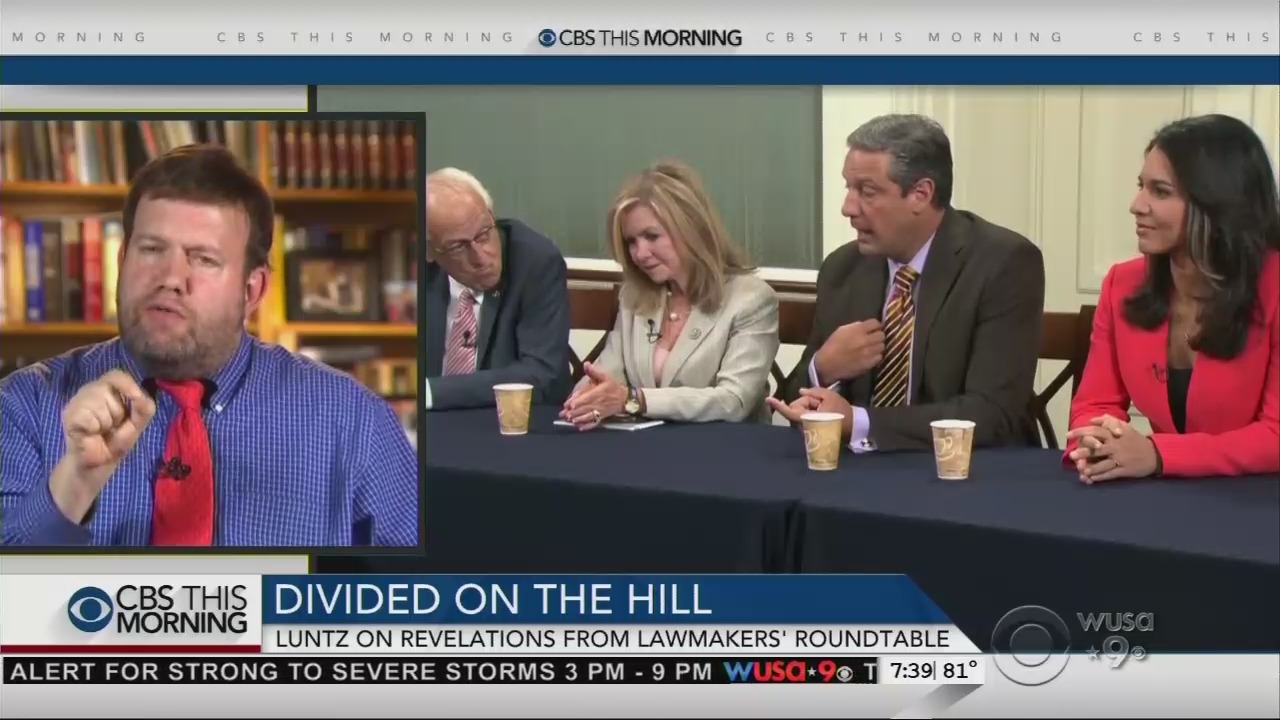 Republican pollster Frank Luntz scolded the media for its coverage of the GOP health care bill,and Congress in general, during a segment on CBS This Morning Friday. Luntz sat down with a group of Republican and Democratic Congressmen and women to discuss the bill, and many other issues which they agreed on or disagreed on, and how they felt about how the media covered them. CBS then played a video clip from that talk, before getting Luntz’s take.

CBS began by playing the video, before asking Luntz about what he discovered about Congress during his time with them. The pollster had stern words for the CBS News team, after he felt that the video shown did not accurately represent the conversation that took place.

A Gallup poll has the approval of Congress right now at 20%. Anything you heard yesterday to indicate there is room for progress on any of these ideas?

Luntz took issue with parts of the conversation that were edited out, that showed the group had more in common than the media presented. He blasted them for taking “soundbites to focus on where they disagree, rather than on what unifies them”:

There are two members you didn't include in that clip that said very important things. Senator Joe Manchin from West Virginia talked about not campaigning against his colleagues. That how can you govern, in a non-election year, if you are attacking people in an election year? Attacking them personally? And several of those people there said, you know what? That’s a great idea. Brian Mast, the new congressman, the freshman from Florida, talked about the sacrifice of armed services, of our men and women in uniform. And how members of Congress need to understand and appreciate that sacrifice, just like our armed services do. When you put aside all differences because you have one mission. I have to acknowledge, you guys focused on the issues, but for most of the conversation, they talked in principles. And for the most part, these Democrats and these Republicans do agree. And they talked about how the media took soundbites to focus on where they disagree, rather than on what unifies them.

Glor tried to defend their reporting by pointing to Congress’s inability to pass the healthcare bill.

“Frank, Frank, principles are very important, no one doubts that but the bottom line is they have to come together on the issues. And they’re not,” he stated.

Luntz criticized the network again for “only focusing on the differences,” before slamming the media’s reporting as setting an “inappropriate” tone, by constantly reporting from the negative.

But there are other issues. I just don't think it's appropriate to constantly focus on where they disagree, without also acknowledging like Russia and there are other issues that they talked about, where these people, these men and women are doing the best they can to find common ground when their constituents are all riled up, when the country is seriously polarized. All Congress is, is a reflection of the American people. And I oughta know, because that's what I'm doing every single day across the country, much of it for CBS.

After that answer, fill-in co-host Bianna Golodryga from Yahoo! News pressed Luntz if Republicans were really “doing the best they can” with this healthcare bill, touting its low approval numbers. Luntz reminded CBS that this kind of polarization on healthcare happened with ObamaCare as well.

BIANNA GOLODRYGA: Frank, how are they doing the best they can? Let's get off of Russia for a second and talk about health care. One recent poll shows it as the lowest rated passage of any sort of bill in 30 years. I mean you've got Republicans who have been in charge of everything in Washington who can't get together and come up with a bill that has any sort of approval rate amongst Republicans.

LUNTZ: And you have the same on the Democrat side. The Republicans demonized ObamaCare as it going through the process, Democrats are doing exactly the same thing to the Republicans, I agree with you.

He again reiterated how Congress does more than talk about healthcare yet the media doesn’t seem to care to report on all the agreement Democrats and Republicans come to:

LUNTZ: But if you focused on Russia, you went right to health care. If you focused on Russia, you saw 12 out of 12 members said that the investigation conducted by the former FBI Director, Mueller, that investigation they will accept the findings and in fact they want to wait until that investigation is done. All 12 members raised their hand and said, yes, this something we need to do and they all support sanctions against Russia. That's a place where they came together and that's pretty powerful. You focused on the place where they came apart. That's just interesting. I would note that to you all. In an hour and ten minutes, they agreed with more than what they disagreed with.

GOLODRYGA: Well these aren’t trivial issues that we’re focusing on, Frank, but we appreciate your time in the group. Thank you.