CNN commentator Jack Cafferty, on Thursday’s The Situation Room, found racist overtones to the recent McCain campaign ad comparing the hype surrounding vapid celebrities like Paris Hilton and Britney Spears to the hype surrounding Barack Obama: "I think it's very much playing the race card to put a highly educated, articulate, middle-aged black family man into a television commercial with two blonde bimbo airheads with a combined I.Q. of a box of cereal. And if you have any doubts about what I'm talking about, it's the same kind of thing that was done to Harold Ford down in Tennessee in 2006 and it stinks. It's more subtle, but it stinks just the same."

Cafferty was referring to the spot the RNC ran against Harold Ford in the 2006 Tennessee Senate race which made light of how Ford appeared at Super Bowl party thrown by Playboy magazine in 2005. In the ad, an attractive young blonde joked about how she met Ford at the Playboy bash, and asked him to call her. Liberals reacted harshly to the supposed racist insinuation made by the ad. The NAACP condemned it as a "a powerful innuendo that plays to pre-existing prejudices about African-American men and white women."

From Her Glass House, Behar Casts Stone at Mel Gibson 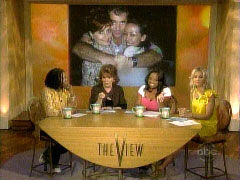 Joy Behar, who has made anti-Catholic remarks in the past, appeared unforgiving about Mel Gibson’s past anti-Semitic slurs. Discussing the news that the actor and Oscar winning director was counseling Britney Spears, Behar expressed outrage that Britney’s mother would "allow" the pop star, who is 26, to seek help from Gibson.

On this day in the year 2000, the guided missile destroyer USS Cole was attacked by Islamic terrorists associated with Osama bin Laden's al-Quaeda group. Today is the seventh anniversary of that attack. Seventeen American sailors were killed and thirty-eight injured in the attack which severely damaged the ship. Yet not a single major media organ has reported this so far.

Attacking a warship has been long viewed as an act of war. The most recent example occured in 1968 when North Korea attacked the USS Pueblo. To our national shame, the Pueblo is still in the hands of that country. A rather more forceful response occurred in 1941, when Japan attacked the US Pacific Fleet at anchor in Pearl Harbor.