If Britney Spears wants to launch her grand return with a trite and tacky rough-sex pantomime, I suppose that's her business.  She's not known as a pop tart for nothing. What I do find noteworthy is the way GMA celebrated that bit of rough stuff, featuring it in its opening minutes. Even there, it's not ABC's descent into schlock that jumps out so much as the double standard.  Can you imagine the dutifully feminist ABC applauding such junk if the gender tables had been turned?  Me neither.

DIANE SAWYER: The concert event of the season: Britney Spears turns 27 today, and performs live under the Big Top, live, only on GMA!

A bit later, it was Robin Roberts's turn to enthuse.

ROBIN ROBERTS: And it's big, big, big, big: huge! It is B-Day! Britney Spears, live, this morning, and so we're going to start our countdown clock to her concert at the Big Top at the Big Apple Circus.  Her new CD out today is entitled "Circus." 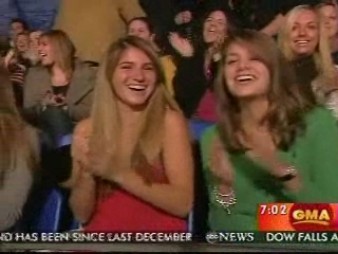 As Roberts spoke, a clip rolled of Spears's shtick:  rubbing her shoulders provocatively, shaking her hair, crawling across the floor to grab, in a bit of hackneyed symbolism, the guy by his tie.  She turns him on his back and proceeds to administer a lusty below-the-belt kick worthy of Adam Vinatieri.  Close-ups of guy grimacing in agony as he tumbles down the stairs.

Cut to crowd of mainly young girls laughing and applauding.

Yes, we know it's all in good dirty fun.  No harm no foul.  But we also know ABC would never have aired this in a million years had the sex roles had been reversed—unless it was to launch an investigation into misogyny and violence against women.   But consciously or not, we all—even the good feminists of the MSM—realize there are differences.

Note: NewsBuster Noel Sheppard notes that the clip comes from the video of Britney's hit song, "Womanizer."  The guy is getting his comeuppance for his roving ways. 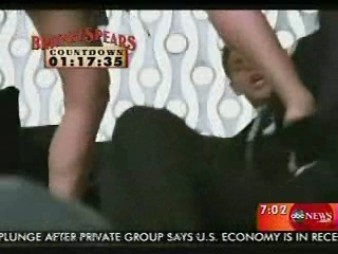