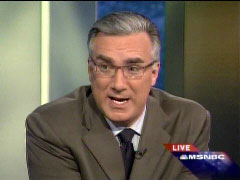 nfluenced by New York Times columnist Bob Herbert's recent claims on MSNBC's Morning Joe that the McCain campaign deliberately included "phallic symbols" along with images of attractive young white women in an ad attacking Barack Obama to exploit racial resentment, MSNBC host Keith Olbermann latched onto this theory on Monday's Countdown show and observed that the ad featured "two underdressed blondes mixed with the black guy," and contended that the ad included "three phallic symbols, two blondes and Barack Obama," opining that the ad is an example of "miscegenation," and that it suggests Obama is "going to wind up dating those women."

Newsweek's Jonathan Alter, also an MSNBC political analyst, charged: "That's the oldest and deepest racist, you know, canard in American history, really, is that, you know, the slave is going to come after the wife of the plantation owner." And, ignoring the GOP's history of portraying white Senator John Kerry as elitist during the 2004 campaign, Alter further charged that Republicans are "trying to portray [Obama] as being uppity," and hinted at the racially charged connotation of the word "uppity." (Transcript follows)

Then, although it was Alter who chose to use the word "uppity," Olbermann's response seemed to assume that Republicans were introducing the racially charged word: "Well, if we're playing Password and you say 'uppity,' the word that comes into my mind, that's racist, yes. Yes."

Below is a transcript of the relevant exchange which came during a discussion of the effectiveness of negative campaign ads, from the Monday, August 4, Countdown show on MSNBC:

KEITH OLBERMANN: What about when it backfires? Because it seems like the celebrity ad continues to echo. And Bob Herbert of the New York Times was on this network pointing out something I don't know that anybody noticed before this morning. That not only in that McCain ad where there two underdressed blondes mixed with the black guy in the ad, but there were also images of the Leaning Tower of Pisa, the Washington Monument, and the Victory Column in Berlin -- as Bob Herbert put it, "phallic symbols." Three phallic symbols, two blondes and Barack Obama. So this is not just a sexist ad anymore. This is what they used to called "miscegenation," isn't it? This is what they used against Harold Ford. 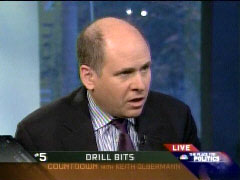 JONATHAN ALTER, NEWSWEEK: Well, to suggest that somehow, you know, Obama's going to-

OLBERMANN: He's going to wind up dating those women-

ALTER: That's the oldest and deepest racist, you know, canard in American history, really, is that, you know, the slave is going to come after the wife of the plantation owner. I can't, sort of, dissect and decode these ads that way. I just, somehow maybe my media literacy is lacking. I didn't read that out of those ads, but I can see how some people would. And the larger issue, I think, is clear, which is they're trying to portray him as being uppity. Now, is that racist? I'm not sure, you know.

OLBERMANN: Well, if we're playing Password and you say "uppity," the word that comes into my mind, that's racist, yes. Yes.

ALTER: Yes. That is clearly what the larger subtext is. As for the phallic stuff, I'll leave that to others.

OLBERMANN: Well, all right, we'll just drop it there.