The mid-afternoon host proudly featured the ex-congressman in a segment entitled "Sunshine State of Mind," proudly reminding viewers that it was Grayson whose hallmark achievement in Congress was charging during debate on the House floor that Republicans want sick Americans to "die quickly" because they opposed ObamaCare.

For a guy Al Sharpton introduced as a "warrior for the 99%," Alan Grayson's got a weird way of showing it.

One of the richest members of Congress--till his constituents showed him the door in 2010--on Sharpton's MSNBC show this evening liberal Dem Grayson twice described the 99% as "sheep."  Video after the jump.

Democrat Rep. Alan Grayson of Florida, the fiery leftist and Republican hater whose offensive comments about Republicans may well have cost him his seat last November, gets a fairly fond send-off in Monday's New York Times.

Reporter Michael Barbaro, previously known for his hostile coverage of Wal-Mart, called Grayson the “pugnaciously partisan, verbal-bomb-tossing, liberal folk hero of the 111th Congress,” and the headline and text box are complimentary. “Enter: Swinging. Exit: Much the Same Way.” The text box: “In or out of Congress, Alan Grayson is a man of strong views.”

After relaying a few newly minted Graysonisms like calling incoming speaker of the House John Boehner a “tool of special interest,” Barbaro summarized the bombastic former lawmaker with a stream of ambivalent adjectives:

Representative Alan Grayson, a Democrat from Florida’s Eighth Congressional District, is leaving office on Wednesday much as he entered it two years ago -- as the pugnaciously partisan, verbal-bomb-tossing, liberal folk hero of the 111th Congress.

Lawrence O'Donnell and Other Liberals Make a Fool of Rep. Alan Grayson

For the second night in a row, MSNBC's Lawrence O'Donnell exposed a prominent liberal for being totally ignorant about the tax code.

His victim on Wednesday's "The Last Word" was liberal media darling Rep. Alan Grayson (D-Fla.), and this time O'Donnell had some assistance from two very unlikely participants (video follows with partial transcript and commentary):

Are you an elected Democrat?  Someone who managed to survive the whacking this week, but is still looking forward to early retirement beginning in 2012?  We've got the perfect political consulting firm for you: Grayson-Uygur . . .

Sitting in for Ed Schultz this evening, Cenk Uygur embraced Dem loser Alan Grayson's hyper-confrontional campaigning style, while adding a suggestion all his own: Dem arrogance and triumphalism.

Please, Dems, retain this apocryphal firm immediately: we could be headed to the first 435-0 House in history. View video after the jump.

Take Your Olive Branch and Shove It, Democrats

On the eve of a historic midterm election upheaval, President Barack Obama tried to walk back his gratuitous slap at Americans who oppose his radical progressive agenda. "I probably should have used the word 'opponents' instead of 'enemies' to describe political adversaries," Obama admitted Monday. "Probably"?

Here is an ironclad certainty: It's too little too late for the antagonist-in-chief to paper over two years of relentless Democratic incivility and hate toward his domestic "enemies." Voters have spoken: They've had enough. Enough of the 2009 Nobel Peace Prize winner's rhetorical abuse. Enough of his feints at bipartisanship. Whatever the final tally, this week's turnover in Congress is a GOP mandate for legislative pugilism, not peace. Voters have had enough of big government meddlers "getting things done." They are sending fresh blood to the nation's Capitol to get things undone.

The Democrats’ strategy to salvage the 2010 campaign was to distract voters from their record over the past two years and paint their opponents as wacky extremists. Win or lose, the Democrats got a lot of help from their friends in the supposedly objective “news” media. MRC analysts reviewed the ABC, CBS and NBC evening newscasts from September 1 through October 25. Key findings:

■ Only conservative/Tea Party candidates cast as “extreme.” Congressional Democrats and President Obama are facing voters’ wrath because of their extreme agenda over the past two years: government-run health care; massive unsupportable spending; a proposed “cap-and-trade” tax on energy, higher income taxes, etc. But MRC analysts found 35 evening news stories which conveyed the Democratic spin point that conservative and Tea Party candidates are “extreme,” “fringe,” or “out of the mainstream,” vs. ZERO stories conveying the charge that left-wing Democrats are “out of the mainstream.”

Miller briefly referred to Grayson's history of controversial comments: "...this lawyer, former businessman, and economist, has gained notoriety for his partisan remarks on the House floor." A clip was played of the Congressman proclaiming that Republicans wanted to people to "die quickly" because they opposed ObamaCare. However, missing from the report was any mention of Grayson accusing his opponent of being like the Taliban for having socially conservative views.

Alan Grayson Lies to DUers in Plea for Donations

Just how desperate is Democrat Congressman Alan Grayson to get re-elected now that even liberals such as Contessa Brewer have questioned both his credibility and ethics? So desperate that Grayson is now pleading for donations at the Democratic Undergound. And in keeping with his normal operating procedure, Grayson accompanied his donation plea with a flat out lie. Here is Grayson making his pitch to the DUers with his lie highlighted:

On Friday, the DC newspaper "Politico" reported that:

(a) "conservative outside groups" have now spent over $9 million "slamming vulnerable House Democrats," and

(b) the total against me will reach "at least $1.7 million by the end of next week."

Think about that. I am only one member of the U.S. House of Representatives, out of 435. I represent one-quarter of one percent of America. And yet roughly TWENTY PERCENT of spending in the entire country by these shadowy right-wing groups has been spent to defeat . . . 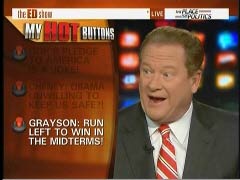 Last week, on the Thursday, September 23, The Ed Show, MSNBC host Ed Schultz touted inflammatory Democratic Congressman Alan Grayson as an example that other Democrats should be following, and, apparently oblivious to the history of partisan polls being notoriously inaccurate, treated with credibility a poll conducted for Grayson’s campaign which showed the Democratic incumbent 13 points ahead of his Republican challenger, Daniel Webster, as evidence that other Democrats should learn from the Florida Congressman. Notably, a Sunshine State/VSS poll released this week finds Grayson trailing Republican Webster by seven points, 43 to 36 percent.

On his radio show Monday, Schultz even praised Grayson's controversial ad that compares Webster's religious views to the Taliban, declaring, "I love it," and, during a panel discussion on Monday's The Ed Show on MSNBC, Schultz played a clip of the ad without noting its blatantly dishonest distortion of the Republican’s words. The MSNBC host, who introduced the ad by calling it a "blockbuster," ended up claiming that Grayson’s activities were no worse than those of Republicans as he debated conservative talk radio host Michael Medved.

Back to the September 23 Ed Show, Schultz plugged his interview with Grayson at the top of the show, contending that the Florida Democrat "is a loud and proud progressive, and it’s working with voters in his district," and later introduced the segment declaring his belief that Grayson's alleged success offered "hope" for struggling Democrats:

Grayson, a freshman Democrat, has made a name for himself in the past year for his outlandish soundbites and theatrics on Capitol Hill. His latest venture into psycho talk is an attack ad accusing Webster of degrading women, calling him the "Taliban."

"So Congressman, your opponent is a fellow American, a longtime public servant of the people of Florida, and you called him the 'Taliban'," Brewer began. "How do you defend that?"

Brewer also asked Grayson to explain his editing of Webster's reference to Scripture. The commercial showed Webster quoting the Bible, "Wives, submit yourselves to your own husbands." However, the ad conveniently left out what Webster said before the quote, distorting the whole context of the remark.

Only Good Morning America's Jake Tapper on Monday highlighted an attack from the liberal Alan Grayson that his Republican opponent "doesn't love this country." CBS's Early Show and NBC's Today have yet to report on the harsh new commercial by the Democratic Congressman.

Additionally, none of the networks have discussed an ad where Grayson compares the same Republican to the Taliban.

Focusing on the upcoming midterm elections, Tapper explained, "And many Democrats are playing the only card they feel they have left, the fear card." He added that Grayson himself is not a veteran, but "that isn't stopping him from using an anonymous narrator to assail his Republican opponent for not serving either."