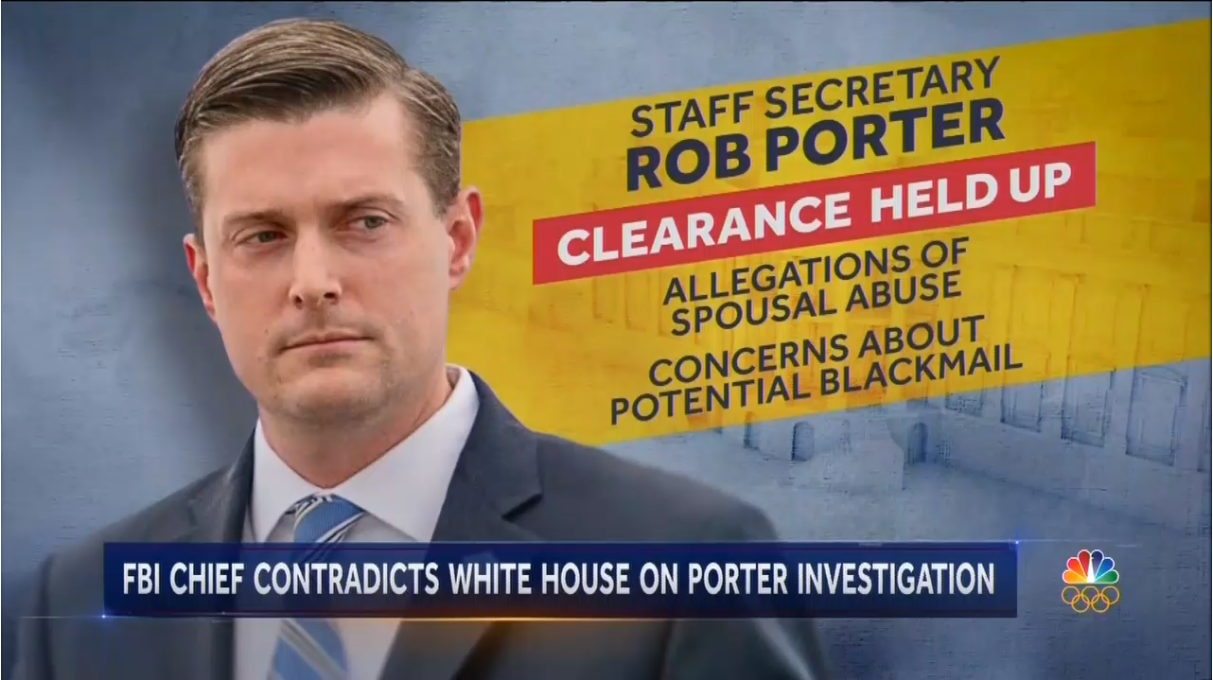 Editor's Note: UPDATED, with CLARIFICATION below.

It has been a week since the disturbing allegations came to light that Rob Porter, a now-former White House staffer close to the President, had a history of domestic abuse against his two ex-wives. And during that time, the evening newscasts of the major network news outlets (ABC, CBS, and NBC) had dedicated almost a combined hour to the story. But when it came to similar accusations against congressional Democrats, they couldn’t be bothered.

Over the past seven days, between February 7 and February 13, both ABC’s World News Tonight and NBC Nightly News have each run a full report on Porter every night. And the only reason CBS Evening News didn’t follow suit was that they didn’t broadcast over the weekend due to golf.

In the spring of 2014, Politico reported that the estranged wife of Florida Congressman Alan Grayson was awarded a temporary order of protection by a state judge after she claimed that he laid his hands on her during a dispute. According to a Media Research Center report at the time: “Only Today show journalist Kristen Welker on Wednesday revealed, ‘Democratic Congressman Alan Grayson is denying allegations that he shoved his wife, Lolita Grayson.’”

The MRC piece when on to note that “CBS This Morning and ABC's Good Morning America ignored the accusations. Tuesday night's evening newscasts did as well.” So at the time, between an evening and morning broadcast, only one show mentioned the accusations.

There was also the case of Delaware Senator Tom Carper who, according to The Washington Free Beacon, “admitted to hitting his ex-wife hard enough to give her a black eye.” “The Delaware Democrat first faced accusations of domestic abuse back in 1982 during his first run for Congress, but he called the accusation ‘without basis in fact’ and prevailed in the election,” The Beacon added.

The Beacon also noted that “in a 1998 interview reported on late last year by the Washington Free Beacon, however, Carper admitted it was true all along.”

A Nexis search of ABC, CBS, and NBC revealed no mention of Carper's admitted abuse in the past 20 years, a time period which would encompass the Democrat's 2000, 2006, and 2012 Senate campaigns.

The allegations against Porter were terrible and the White House’s shifting explanations have not ameliorated the coverage, but the networks failed to show a basic level of objectively when covering similar stories involving high ranking Democrats.

CLARIFICATION: On Wednesday, NewsBusters was contacted by a representative of the Committee to Elect Alan Grayson to take issue with a story published Tuesday night, which talked about instances when allegations of domestic abuse leveled against Democrats were ignored by the three broadcast evening newscasts.

The original NewsBusters article (since changed) stated: “In the spring of 2014, the estranged wife of Florida Congressman Alan Grayson was awarded a temporary order of protection by a state judge after he laid his hands on her during a dispute,” before documenting that this case received no evening news coverage, although it was briefly mentioned on NBC’s Today show.

Ben Weaver of the Grayson campaign objected in an e-mail:

The article incorrectly states that Alan Grayson ‘laid his hands’ on Lolita Grayson, which is indisputably untrue, based on video of the incident and the statements of witnesses and Lolita herself....The video of the incident clearly shows Lolita Grayson striking Alan Grayson in the face several times, and Alan backing away....Mr. Grayson is the victim of domestic violence, and you have publicly defamed him by depicting him as the perpetrator. Based on the above information, all of which has been reported by press outlets and is publicly available, we ask for a correction on this story to be issued immediately. An apology would also be appropriate.

The NewsBusters article should have more precisely stated: “In the spring of 2014, Politico reported that the estranged wife of Florida Congressman Alan Grayson was awarded a temporary order of protection by a state judge after she claimed that he laid his hands on her during a dispute.”

The point of the NewsBusters article remains true: that the Politico report about Grayson failed to trigger a spate of national news coverage (as has been the case with the charges against former White House aide Rob Porter). But it is beyond the scope of NewsBusters’ expertise, and mission, to make claims about the validity of the underlying charges; our job is strictly to analyze the news media’s coverage of these various claims.

In fact, there were additional charges of domestic abuse leveled against Grayson by his wife, reported by Politico in July of 2016: “Lolita Grayson called police on her husband at least two times in Virginia and two more times in Florida, sought medical attention on at least two occasions and said that, in one instance, he had threatened to kill her, according to a police report.”

A Nexis review of the past five years of ABC, CBS and NBC evening newscasts finds no coverage of either the 2014 disclosures or the 2016 reports.

It is also a fact that Congressman Grayson has strongly disputed all of the allegations made by his wife; that his estranged wife dropped her request for a restraining order; and that no charges were brought as a result of the 2014 incident. NewsBusters’ only point in raising this case is to demonstrate the different media reaction to charges made against an elected Representative who is a Democrat, vs. a White House staffer who is a Republican.

Consequently, the original article has been changed as described.