As if he were after Alan Grayson’s heart, former NBC News correspondent Luke Russert uncorked a disgusting tweet late Monday afternoon, claiming in his "simple true analysis" that “many people will literally die” under the Republican plan to repeal and place ObamaCare.

Eight months to the day that he announced his departure from NBC and MSNBC for “other endeavors” and traveling the globe, Russert unleashed this tweet that, as of this writing, had yet to be deleted: 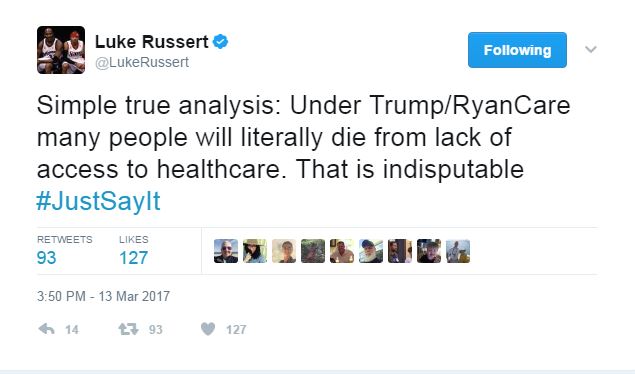 What’s “true” about this? Does Russert have any “indisputable” facts or way to predict the future? In this day and age where the media has stayed on top of the story about Trump alleging President Obama wiretapped him, it’s important to show your work for lack of a better term.

The GOP health care plan faces criticism from the left and right, but it’s safe to say that the Trump White House and House Republican leadership wouldn’t have conceived of the American Health Care Act (AHCA) if this were the case.

Journalists have prided themselves on supposedly being objective and not seeking sides. For you, the readers of NewsBusters, it’s clear as that this is far from the truth.

Whether it’s tweets like this, videos in Spanish supporting the Day Without Immigrants, or fawning over Obama’s farewell address by comparing it to the one Dwight D. Eisenhower delivered, the political tweets since Russert left NBC have shown he’s die-hard liberal that only played a journalist on television.

Somewhere, not only Grayson is smiling but the slimy folks responsible for the video that depicted Paul Ryan pushing an old woman off a cliff.