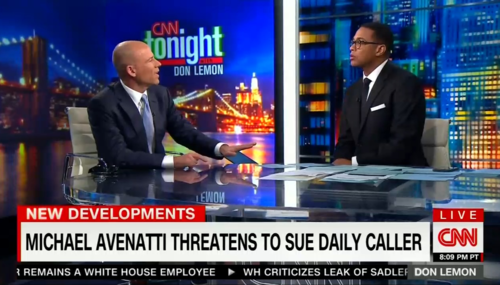 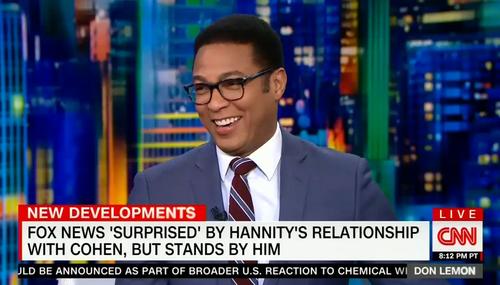 Brad Wilmouth
April 18th, 2018 12:42 PM
On Tuesday's CNN Tonight, during a discussion of whether conservative FNC host Sean Hannity should have divulged earlier that he has an association with Donald Trump attorney Michael Cohen, there seemed to be unanimous agreement that Fox News is "not news."

Tom Blumer
December 27th, 2017 9:15 AM
Who knew that two words could drive the people at CNN this crazy? At the network which has exemplified fake news since Donald Trump's election in 2016, the "resistance" to Trump's preference for saying "Merry Christmas" during this time of year has led network talking heads to repeated denials that there ever has been a war on Christmas, while at the same time trying to open new fronts in that… 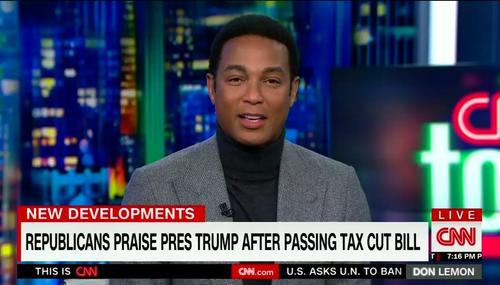 'My God, Is That SNL?' CNN's Lemon Laughs at GOP Praise for Trump

Tim Graham
December 21st, 2017 4:25 PM
Republicans celebrated a big win on Wednesday, and CNN Tonight anchor Don Lemon responded by mocking it as a “festival of flattery” for an egotistical president. Lemon pretended that this kind of gushing over a president has never been done in modern times, as if Lemon’s never watched network TV coverage of the Obamas, or the Clintons, or the Kennedys. He laughed and said, "My God, is that SNL?… 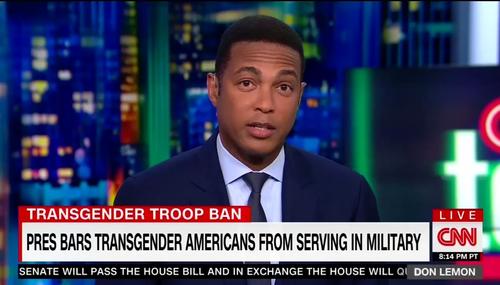 Brad Wilmouth
July 27th, 2017 1:03 PM
On Wednesday's CNN Tonight, host Don Lemon declared that President Donald Trump's announced policy of barring transgenders from serving in the military would be a "return to the dark ages." He then proceeded to command over two panels on the subject in which each panel featured just one right-leaning guest to defend the policy up against two liberal guests plus host Lemon to advocate the liberal… 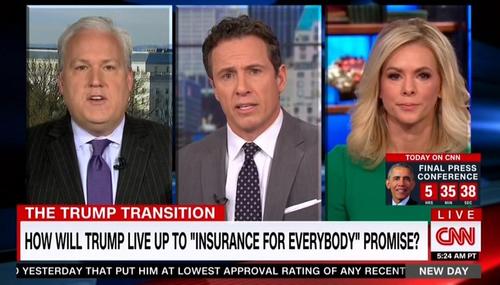 Matthew Balan
January 18th, 2017 3:39 PM
On Wednesday's New Day, CNN's Chris Cuomo ripped a proposal to let health insurance companies compete across state lines. Cuomo pointed out to Matt Schlapp that Rep. Marsha Blackburn cited "one of my favorite bills — let's open up the state lines, and let all the companies compete....not only do we have some of that in the system already, but there is no proof...that that would guarantee access… 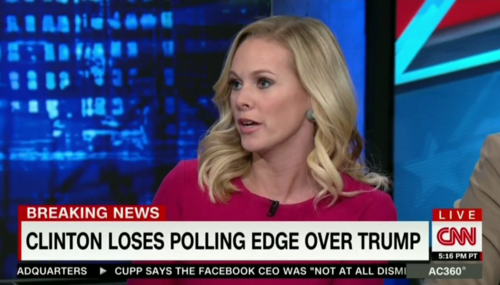 Brad Wilmouth
May 19th, 2016 8:34 PM
On Wednesday's Anderson Cooper 360, an eight-member panel consisting of only one solid conservative, combined with several solid liberals, was mostly down on GOP presidential candidate's short list of possible Supreme Court picks. With socially liberal Republican Margaret Hoover, who referred to the picks as a "dog whistle to social conservatives," joining with other liberals to gripe about the… 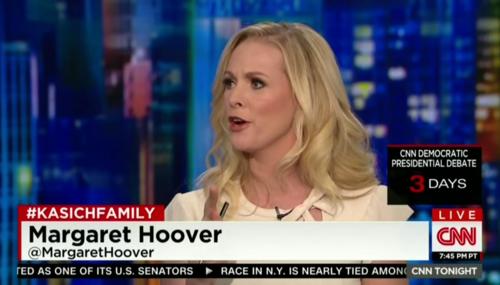 Brad Wilmouth
April 12th, 2016 3:48 PM
Appearing as a panel member on Monday's CNN Tonight, during a discussion of proposed religious freedom laws in states like Mississippi and the bathroom law in North Carolina, CNN political commentator Margaret Hoover slammed the measures as "draconian laws that dismiss LGBT people." For his part, host Don Lemon labeled the laws as "crazy" after liberal Republican Hoover recalled polling that… 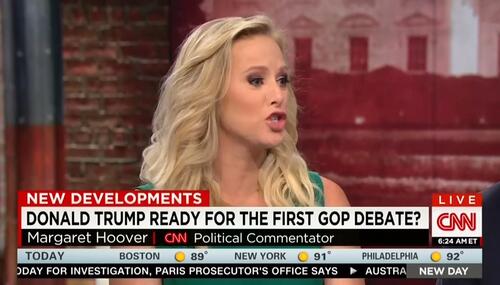 Brad Wilmouth
July 31st, 2015 12:43 PM
As if one had to be "far right wing" to oppose giving legal status to most of the country's millions of illegal immigrants, CNN political analyst Margaret Hoover on Friday's New Day asserted that the "far right wing of the Republican Party" will oppose Donald Trump's plan to allow the estimated 11 million illegal immigrants already in the U.S. to acquire legal status. 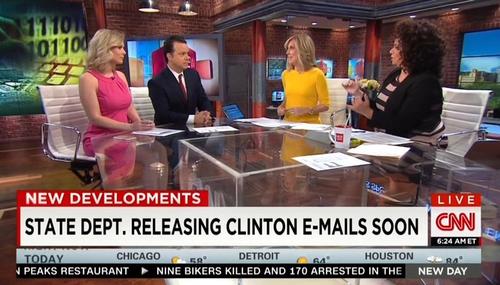 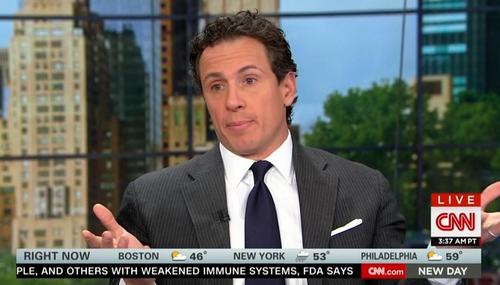 Matthew Balan
April 21st, 2015 4:50 PM
Liberal CNN anchor Chris Cuomo took a shot at Republicans on Tuesday's New Day, as he touted the most recent poll results from his network that found poor approval numbers for congressional Republicans. When regular guest Margaret Hoover asserted that "there is Republican brand damage," Cuomo cracked, "Brain damage? What did you say?" 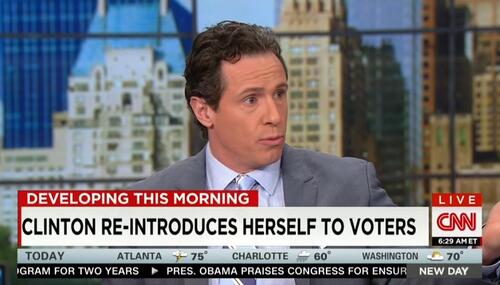 Matthew Balan
April 15th, 2015 3:59 PM
On Wednesday's New Day on CNN, a panel of journalists and pundits yucked it up over Hillary Clinton's recent incognito visit to a Chipotle restaurant in Ohio, and made light of her scandals. Maggie Haberman of the New York Times joked that Clinton "dominated Marco Rubio's rollout – which was a very impressive rollout – with pictures looking like she was robbing a Chipotle." Anchor John Berman… 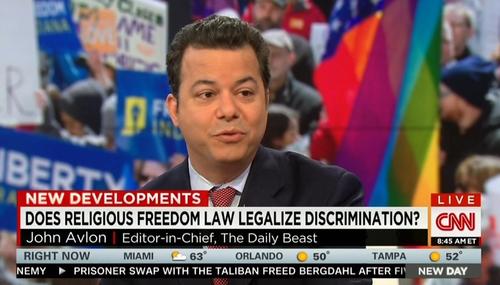 Matthew Balan
March 30th, 2015 1:01 PM
On Monday's New Day on CNN, Daily Beast's John Avlon likened Indiana Governor Mike Pence's defense of his state's new religious freedom law to George Wallace's fight for racial segregation. Avlon asserted that Republican politicians "don't want to say they're in favor of bigotry. So what you get is that incredibly awkward stonewalling by Mike Pence." He added that "this puts him in the same… 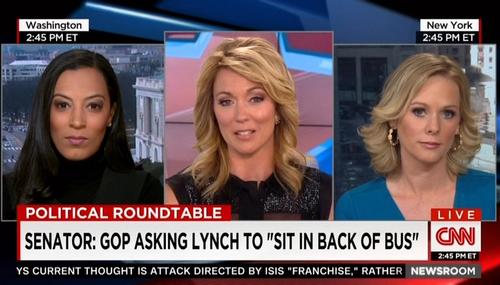 CNN Highlights Bipartisan Attacks on Durbin's 'Back of the Bus' Smear

Matthew Balan
March 19th, 2015 4:34 PM
On Thursday's CNN Newsroom, Brooke Baldwin actually pointed out that both Democrats and Republicans are "pretty angry" with Senator Dick Durbin for his incendiary "back of the bus" attack on Senate Republicans, after they delayed the confirmation vote of Attorney General Nominee Loretta Lynch. Republican guest Margaret Hoover attacked Durbin for his "incredibly divisive" remarks, and underlined…