'My God, Is That SNL?' CNN's Lemon Laughs at Supposedly Extreme GOP Praise for Trump

Republicans celebrated a big win on Wednesday, and CNN Tonight anchor Don Lemon responded by mocking it as a “festival of flattery” for an egotistical president. Lemon pretended that this kind of gushing over a president has never been done in modern times, as if Lemon’s never watched network TV coverage of the Obamas, or the Clintons, or the Kennedys.

DON LEMON: There was a festival of flattery on the White House lawn today to celebrate the passage of the Republican tax cut bill.

HOUSE SPEAKER PAUL RYAN: Something this big, something this generational, something this profound could not have been done without exquisite presidential leadership. Mr. President, thank you for getting us over the finish line.

REP. DIANE BLACK: Thank you, President Trump, for allowing us to have you as our president and to make America great again.

SEN. ORRIN HATCH: You're one heck of a leader, and we're all benefiting from it. This bill could not have passed without you.

LEMON: My God. Is that SNL? Is that real? Complimenting President Trump has become something of a ritual at the White House, but have other presidents expected such praise? Let's discuss now with CNN presidential historians Timothy Naftali and Douglas Brinkley. I mean, listen, you (Laughs) -- what is going on here?! By the way, you gentlemen look so handsome. You're such fantastic historians. I am just honored to be on television with you.

Isn't that fairly typical praise when major legislation passes? Did Lemon forget Joe Biden saying Obamacare was a "big f---ing deal"? The Democrats had T-shirts made.

This is the same Don Lemon who at this time three years ago proclaimed of the Obamas, "They are America's first couple, the closest thing that we have to royalty." New York Times columnist Charles Blow shot back, "You're going to get in so much trouble for calling the Obamas royals." At the time, our Scott Whitlock pointed out that when Chelsea Clinton had a baby earlier in 2014, they gushed about the Clintons as royalty and a dynasty.

Lemon could just focus on his own network. CNN's David Gergen oozed over Obama's 2008 convention speech: “In many ways, it was less a speech than a symphony....It was a masterpiece." In 2011, CNN's Piers Morgan told Obama aide David Axelrod, "I always feel he's got so many pluses, doesn't he? In a sense, he's personable, he's handsome, he can be funny. You know, abroad he has this great image for America. A lot of things are just perfect about Barack Obama." Four years ago, CNN's Piers Morgan pondered a presidential run by lumpy Chris Christie "after the perfect Barack Obama -- who’s a perfect physical specimen to many people's eyes."

Brinkley said Trump has a 35 percent approval rating and hasn’t done anything notable this year, “But it's worth high-fiving. It is an historic victory. But I think the exaggeration of having to kiss the ring of Donald Trump, it almost seems like a scene out of The Godfather we just saw, not what you would expect from the president of a democracy.”

Timothy Naftali compared it to Nixon, not the Democrats: “I haven't heard this kind of sycophancy since I listened to the Nixon tapes, where Henry Kissinger is telling the president what a remarkable human being he is.”

Naftali added Trump was insecure: “I think one of the lessons that Congress learned was that this president is insecure, and that if you want to work with this president, you have to make him feel great about himself. And they didn't do it in the health care debate. And they decided to do it over tax cuts.”

Lemon was so amazed by these pretty standard clips of praise at a victory celebration that he reprised his amazement in the 11 pm hour with the husband-and-wife CNN analysts John Avlon and Margaret Hoover. He laughed out loud when the clip package ended. 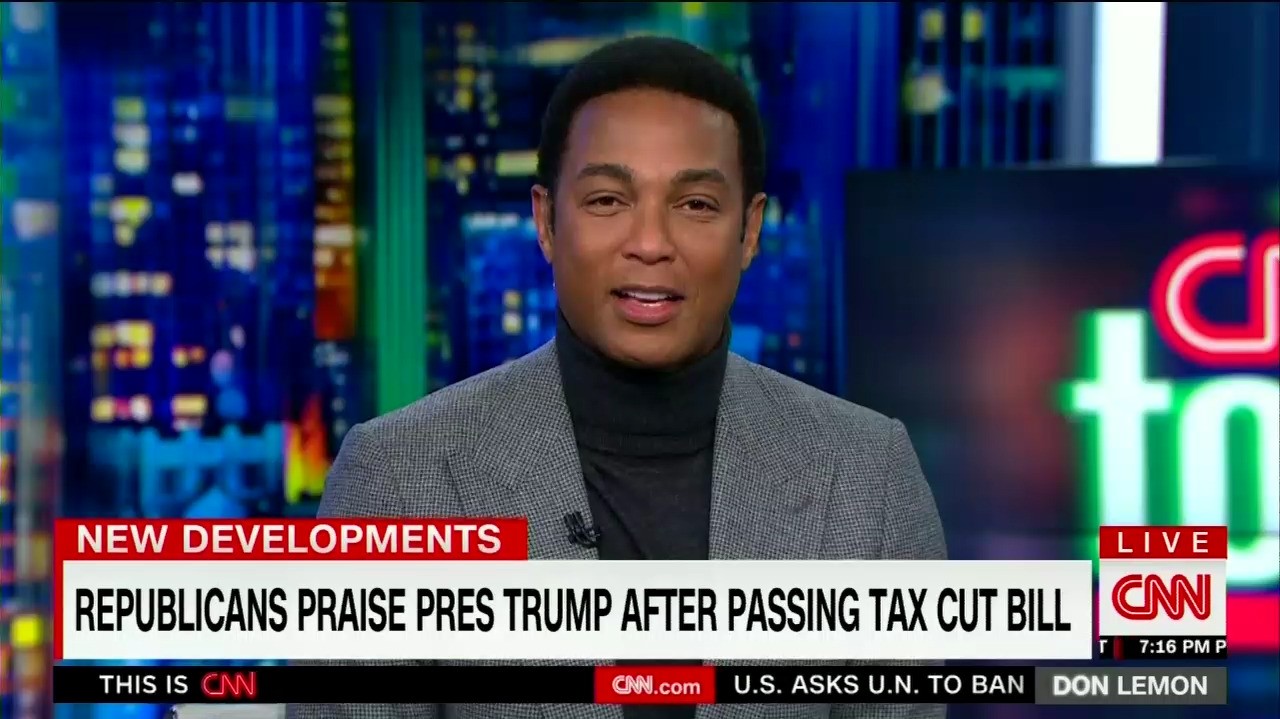 JOHN AVLON: I mean, come on. This sort of Dear Leader genuflection -- like, the cabinet meeting, The Washington Post calculated that Vice President Pence praised him once every twelve seconds for three minutes. That is not normal human behavior, folks. That is a hostage video. I mean what’s going on?

MARGARET HOOVER: No, exactly. Look, this is sad. This is really, really sad.

LEMON: It is embarrassing, isn't it?

HOOVER: It’s really sad. And, you know there was a time where conservatives like me who really supported people like Paul Ryan and the center-right and believed that they were getting, they were supporting President Trump in order to deliver on their principles, right? And so in order to get the kind of tax reform done that we talked about for 30 years, you know, they had to cooperate with the Republican President in order to be -- so it was actually harder for them to be with Trump in order to deliver. And then they didn’t! So this just undermines [underlines?]  the fact that they totally sold out their principles.

LEMON: Why would they do that?

HOOVER: Because they lost all hope. (LAUGHTER)

LEMON: All right. Stop it. When people do that [praise you effusively], don't you say ‘Come on, stop it, this is a team effort, and it took all of us. We all got it done.

HOOVER: This President demands something very different from the people.

AVLON: It’s just creepy to see senior Senators like Orrin Hatch give the President a tongue bath on national television, it is odd. It is just weird.

HOOVER: I don't even know what that is. (LAUGHTER)

Avlon has presided over some creepy conversations at The Daily Beast, like the one where two colleagues said they wouldn't donate their heart to evil supervillain Dick Cheney.