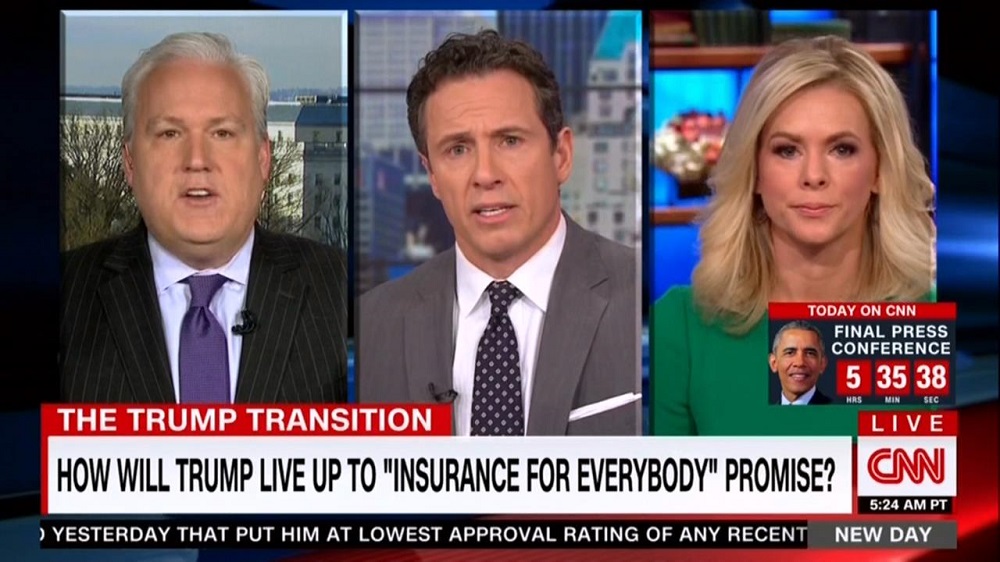 On Wednesday's New Day, CNN's Chris Cuomo ripped a proposal to let health insurance companies compete across state lines. Cuomo pointed out to Matt Schlapp that Rep. Marsha Blackburn cited "one of my favorite bills — let's open up the state lines, and let all the companies compete....not only do we have some of that in the system already, but there is no proof...that that would guarantee access for everyone." He wondered, "Is that the best answer they have right now?" However, Cuomo left out that Rep. Blackburn also disclosed possible other components of ObamaCare replacements. [video below]

Eight minutes before the Schlapp segment, anchor Alisyn Camerota ended her interview of the Tennessee representative by bringing up President-Elect Trump's recent comments on health care/ObamaCare: "On ObamaCare, maybe you can help us understand where Mr. Trump...stands, in terms of insurance...He gave an interview...where he said his goal is insurance for everybody. He then gave another interview to Axios. He said...'There are many people talking about many forms of health care where people with no money are not covered. We can't have that.'" She asked, "What is his plan to have insurance for everybody?"

Rep. Blackburn replied that Trump has "repeatedly talked about one of my favorite bills — across state line purchase of health insurance — H.R. 314. I've worked on it since 2009 — and opening the insurance marketplace — making insurance more affordable, so that individuals can pick a policy that they like choose something that works for them." Camerota interrupted her guest mid-answer and asked one last question before ending the segment:

ALISYN CAMEROTA: But what if they can't afford it? What will pay for everybody to have insurance?

REP. MARSHA BLACKBURN, (R), TRUMP TRANSITION TEAM VICE CHAIR: There are — as we look at the Medicaid reforms that are going to be necessary and block granting Medicaid back to the states — allowing them to take control — not the old constraints of the waiver system — but allowing the states to deliver a product that is going to deliver better outcomes.

You have to say: here's our goal. Our goal is to restore access to affordable health insurance for all Americans — and how do you make that happen with the Medicaid component — with those that do have insurance. And, you know, one of the biggest problems that our hospitals have right now: those with insurance only pay about 40 percent of what the insurance company does not pay — and that is harmful to our hospitals. Let's make them whole. Let's make Medicare whole.

Cuomo led the panel discussion with Schlapp and CNN regular Margaret Hoover with his shot at Rep. Blackburn. When Schlapp tried to defend the proposal, the anchor countered, "When she was asked, how is he [Trump] going to do this; she said, one of my favorite bills — across state lines. That is not an answer to that problem. Do you acknowledge that?" The conservative guest responded, in part, that "the absolute best way to solve this question of access to health insurance — because we already have access to health care — is this question of treating the individual like you treat the corporation. If the corporation gets to write off all their health care and insurance costs, so should the individual, and so should the small business person."

The transcript of the relevant portion of the Matt Schlapp/Margaret Hoover segment on CNN's New Day on January 18, 2017:

CHRIS CUOMO: President-Elect Donald Trump says everybody's got to be able — able to be covered. That has to be there. Marsha Blackburn was just on the show — congresswoman from Tennessee — she says, how will he do that? One of my favorite bills — let's open up the state lines, and let all the companies compete. Matt, not only do we have some of that in the system already, but there is no proof — or even, really, a solid theory — that that would guarantee access for everyone. Is that the best answer they have right now?

[CNN Graphic: "How Will Trump Live Up To 'Insurance For Everybody' Promise?"]

MATT SCHLAPP, CHAIRMAN, AMERICAN CONSERVATIVE UNION: Yeah. No, that's not the question of access, Chris — buying insurance policies across state lines. It's about getting the type of insurance plan that's custom for you. Remember: what Obama did in ObamaCare is he said we all had to have certain minimum requirements in our health insurance—

CUOMO: Right, but that was her answer, Matt. When she was asked, how is he going to do this; she said, one of my favorite bills — across state lines. That is not an answer to that problem. Do you acknowledge that?

SCHLAPP: I do acknowledge that the better answer is to say, if you get rid of the mandate or the fee or whatever the Supreme Court wants to tell us it is — this idea that everyone has to get insurance — it now becomes voluntary. So, there will be people that choose not to get health insurance. But the absolute best way to solve this question of access to health insurance — because we already have access to health care — is this question of treating the individual like you treat the corporation. If the corporation gets to write off all their health care and insurance costs—

CUOMO: Right. But you know what? Cost is not the same thing as coverage. You know, access isn't enough. You have to have a guarantee that people can get it. That's what the President-Elect seems to be talking about. The only reason this matters, Margaret, is you got Tom Price going for another day of his hearing today — he's not only a doctor, but he's a lawmaker who is perceived by the GOP as having the best notion of answers to the problems of repeal and replace. So how big is his confirmation for that?

HOOVER: It's incredibly important. I mean, Tom Price is the one who has spent the last several years — first of all, he's a medical doctor; he has — he knows the health care industry — and he spent the last several years trying to figure out, once ObamaCare is in place — the Affordable Care Act — how would you take this incredibly, sort of, rigid structure, and reform it along the lines of free market principles; so that, to your question to Marsha Blackburn and to Donald Trump's statement, Americans all have access to health insurance — because we do have access to care — and how do you make it affordable to bend the cost curve? Because that's Republicans biggest beef with the Affordable Care Act. We have entitlements that are going through the roof, that take up more and more discretionary funds — non-discretionary funds every year. We cannot afford our health care; and we know for a fact, compared to every other country in the world, there is a way to reform and bend the cost curve in health care. And Tom Price has a better idea of how to do it.

By the way, it's not just — there's no silver bullet on this. I mean, Matt Schlapp made very, very good points about how health care should be portable. You shouldn't be wed to your employer in order to have health care coverage — right? So, going across state lines — competitive markets across state lines — is part of the solution, but it's not the silver bullet. You have to pair it with other things, like tax credits, for your health care; and other propositions that Matt and the American Conservative Union support.