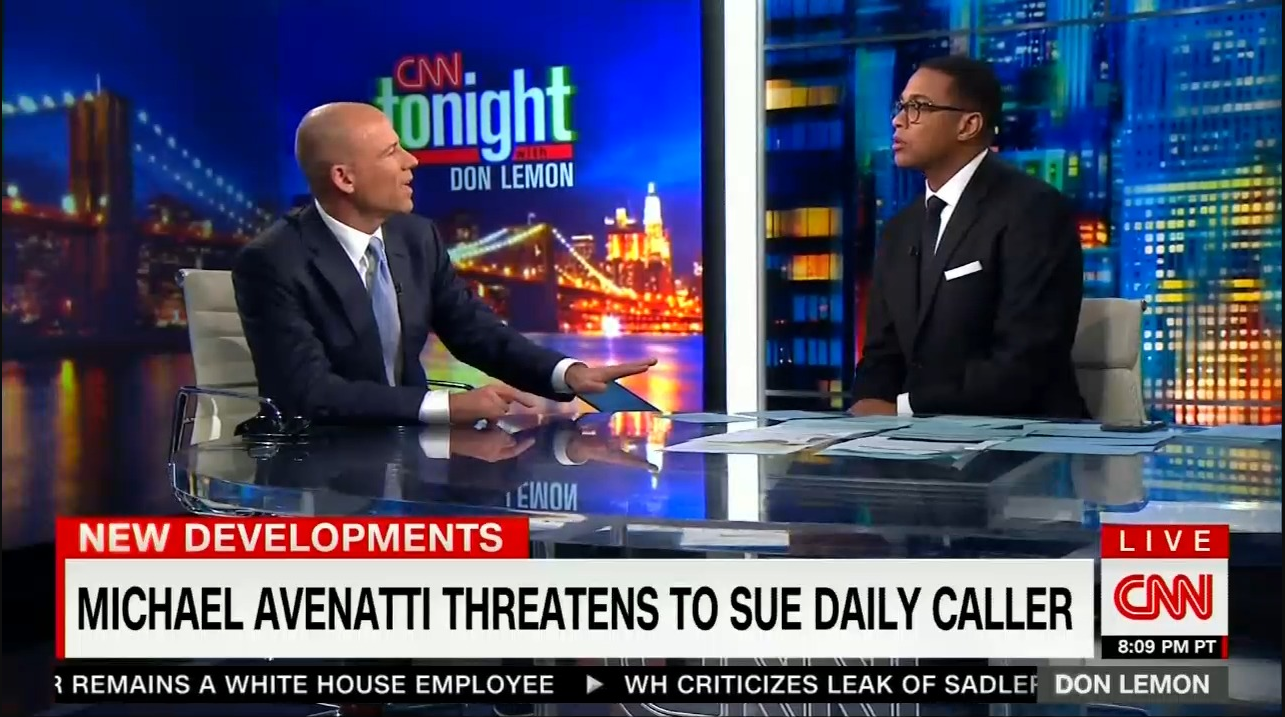 The original tweet, which has been deleted and the account was made private, was posted by former Cuomo aide and lobbyist Juanita Scarlett. “Thrilled to have met [Michael Avenatti] at the Sag Harbor soiree of my second favorite on air journalist [Don Lemon] [Errol Louis] [Margaret Hoover],” she boasted. In all, she listed THREE different CNN folks in her picture and it’s unclear how many more were at this “soiree” it appears Lemon threw, judging by the tweet. Scarlett is also Louis’s wife.

The timing of the photo is damaging for a network struggling with its credibility. Earlier in the week, Avenatti threatened the Daily Caller with a lawsuit following a report they put out looking into his shady history. And when the lawyer made an appearance on CNN Tonight later that same evening, host Don Lemon barely questioned him about his threats against journalists. Lemon even let his guest get away with suggesting the Caller practiced unethical reporting.

It’s okay. I saved that deleted tweet of CNN hosts partying it up with Avenatti. Why would such a thing need to be deleted? pic.twitter.com/iutCtnwaxi

Lemon’s near silence against Avenatti’s smears targeting the press came despite his network’s outspoken criticism of President Trump when he threatened to do something similar or when he shared a mean meme about CNN.

The story took a rather bizarre twist when Lemon’s boyfriend, Tim Malone reached out on Twitter to Joe Simonson, one of the Caller reporters Avenatti threatened. “While Malone initially said he couldn’t comment on Lemon’s thoughts about Avenatti, he did, in a separate conversation Tuesday morning, suggest that the two are friends or at least get along privately,” Simonson reported about their conversation.

This particular imagery of CNN personnel rubbing elbows with someone out to get the President could be even worse than it first seemed. “The soiree was most likely at Lemon’s home since he purchased a place in Sag Harbor a couple of years ago. Avenatti’s presence at the party seemed to confirm Lemon’s boyfriend’s hint to The Daily Caller News Foundation that the two are friends,” noted the Caller’s, Amber Athey.

This wasn’t the first time a CNN personality had a photo of themselves enjoying Avenatti’s company circulate on social media. White House reporter and CNN analyst April Ryan actually posted a picture of herself with him on Instagram. “Was I singing ‘Stormy Weather’ to Stormy Daniels’ attorney Michael Avenatti? You had to have been there to know why we’re both smiling so hard,” she gloated. They were attending the White House Correspondent Dinner.

This is CNN. This is their apple.