The Obama administration revealed Thursday that whoever ends up being director of the Census Bureau, a position yet to be filled, he or she will be required to work closely with the White House.

This is a departure from the autonomy the Bureau had under President Bush, and is worrisome given the census which will be taken next year.

Despite this revelation by Congressional Quarterly on Thursday the only major media outlet which gave this much attention was Fox News.

Before we get there, here's what CQ reported:

Fox News personalities Bill O'Reilly and Greta Van Susteren got into a heated debate on the former's radio program Monday concerning whether or not Carl Cameron should have reported gossip about Sarah Palin last Wednesday that emanated from unnamed McCain campaign staffers.

Van Susteren felt that since these sources refused to be named or stand up and make their accusations in front of the camera, their assertions were basically "schoolyard trash."

O'Reilly felt Cameron's report was valid because the folks he spoke to were "primary sources."

Audio of this interesting difference of opinion between two colleagues with great respect for one another is available below the fold courtesy our dear friend Johnny Dollar (file photo):

As NewsBusters has been reporting since we were at the Republican National Convention in St. Paul, former Speaker of the House Newt Gingrich has been a strongly outspoken critic of how the mainstream media have covered Alaska Gov. Sarah Palin since she was first announced as John McCain's runningmate.

Moments later, he put an exclamation point on his criticism: "This is like watching Pravda. This is a one-sided, vicious, unending and dishonest campaign."

What follows is a partial transcript of this delicious exchange (video embedded right):

Greta Says Media a No-Show in Wasilla, 'Where is Everybody?'

One would assume that the Old Media would have a phalanx of intrepid mushing, journos swarming about Wasilla, Alaska, Sarah Palin's hometown. One would think that every single person that lives within 100 miles of Wasilla would have been contacted by at least one journalist by now. That the media's due diligence would have been dilagenced to death at this point. I mean, it's been two weeks! Well, according to Greta Van Susteren, the media is curiously absent in Wasilla.

Greta posted a quickie blog entry on September 12 wondering where the heck everyone was? 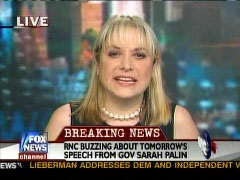 During FNC’s Republican Convention live coverage, former Dukakis campaign manager and liberal FNC analyst Susan Estrich voiced her disapproval of the "vicious and mean-spirited attacks" on Sarah Palin by the media as she appeared late Tuesday/early Wednesday night with anchor Greta van Susteren. Estrich: "I’ve never seen anything this bad in my life ... I was with Geraldine Ferraro in ‘84 – and this is worse. ...

Did you know that if you have a negative view of Michelle Obama, it's all Fox News's fault?

Such seems to be the opinion of Barack Obama who told the magazine Marie Claire, "I think that if you've been watching Fox News then probably she's misunderstood, because I do think there's been a fairly systematic attempt by the conservative press to paint her in a completely false way."

Fox News's Greta Van Susteren heard about this statement by Obama, and took issue with it during an interview she did Monday with the magazine's editor (video embedded right, h/t NBer Thomas Stewart):

Greta Van Susteren is quickly becoming one of Fox News's most ardent defenders against attacks from the ultra-left.

Writing about Netroots Nation -- the gathering in Austin, Texas, of the most liberal people in America -- Greta bashed her former network CNN as well as MSNBC, Chris Matthews, Keith Olbermann, and all those in attendance.

Greta Takes on Anderson Cooper and his Executive Producer

Whether or not you like her program on Fox News, you gotta love Greta Van Susteren's spunk.

After all, even though it's Independence Day, the host of "On the Record" has taken the time to respond to the somewhat childish taunts of "Anderson Cooper 360's" executive producer David Doss who told TVNewser on Tuesday:

We're a news program — ["On the Record"] is not a news program. It's missing-person-of-the-day. There's an audience for that, but it's not what we do. We're covering the world, not just covering who's missing today.

By Mike Bates | June 25, 2008 5:34 PM EDT
We know from the mainstream media that Barack Obama can walk on water, but I now realize that he's quite the multitasker as well.

"Is Senator Obama’s Campaign Booking CNN?" asks Greta Van Susteren on her "On the Record" Web site.  Looks like it.  According to Greta:

By Mike Bates | June 25, 2008 9:42 AM EDT
On her Tuesday evening "On the Record" program, Greta Van Susteren interviewed Speaker of the House Nancy Pelosi.  The cost of gasoline was the first topic discussed.  The speaker told of actions the Democrat-controlled Congress has taken.  Charitably, these are marginal at best, yet Van Susteren didn't challenge Pelosi.  Then the host asked about assigning blame for high gas prices:

Last week Newsweek reporter Allison Samuels defended Barack Obama's decision not to leave the church of Rev. Jeremiah Wright whose America-hating sermons have become a big political issue on the campaign trail. Responding to questions from host Greta van Susteren on the Fox News show "On the Record" May 5, Samuels goes easy on Obama, excusing his decision to stick with Wright for years after Obama supporter Oprah Winfrey quit the Trinity United Church of Christ (apparently) in disgust.

Brent Bozell's culture column on Thursday reported on Joe Francis, the brains behind "Girls Gone Wild" videos featuring college-age women flashing their breasts (and other body parts) at the camera during Spring Break. But filming two underage girls in Florida led to time in jail, and then the feds indicted him for tax evasion, which is why he's in jail now in Reno, Nevada. Francis thinks all this misfortune couldn't have happen to a nicer guy.