On Wednesday night, the major broadcast networks failed to report on news that an internal memo was sent to members of the intelligence community by Director of National Intelligence (DNI) James Clapper praising their efforts on identifying the rise of ISIS after President Barack Obama blamed them for not doing so in an interview on Sunday’s 60 Minutes.

The memo was able to be obtained by Fox News and its chief intelligence correspondent, Catherine Herridge and it detailed how government intelligence has, for two years, “monitored, assessed and called attention to the expansion of ISIS.” [MP3 audio here; Video below]

During an appearance on the Fox News Channel’s On the Record with Greta Van Susteren on Wednesday, Herridge described the letter as one that “seems clearly to be a response to the President’s interview” and, in her opinion, the question is not whether the intelligence community knew about ISIS, but “whether and why the President and his team failed to act.”

While Clapper’s letter did say that both he and the President agreed on the conclusion that it would have been difficult for the intelligence community to measure the “will” of the Iraqi military to fight (before their collapse), Herridge said that “people who have dealt with the intelligence for years, say that simple just doesn’t wash.”

Herridge noted that the job of one government intelligence agency, the Defense Intelligence Agency (DIA), is to “assess the militaries of foreign governments.”

An article on FoxNews.com also stated how:

But Clapper's claims about how their analysts have been drawing attention to the Islamic State – also known as ISIS, or ISIL – for the past two years could fuel concerns that the White House was not taking those assessments seriously enough.

Instead of covering this new development, ABC World News Tonight with David Muir ran a news brief on how massive amounts of sand and soil was used to create a massive portrait of a man’s face on the National Mall. In addition, both the CBS Evening News with Scott Pelley and NBC Nightly News aired stories on a large gathering of walruses on land next to the ocean in Alaska (instead of laying on sheets of floating ice) being due to global warming.

The complete transcript of the segment that aired on FNC’s On the Record with Greta Van Susteren on October 1 is transcribed below. 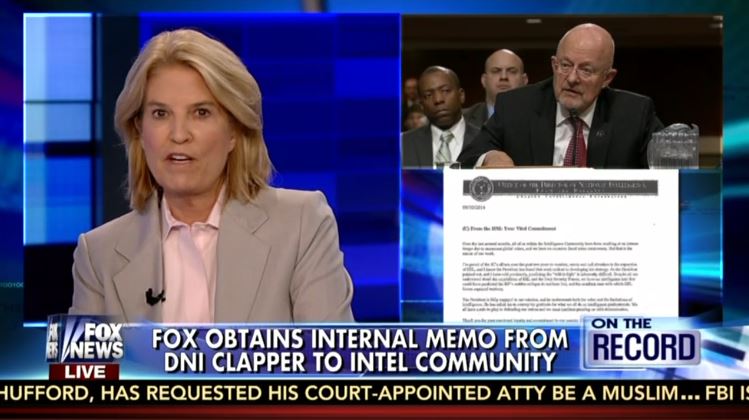 CATHERINE HERRIDGE: Well thank you, Greta. I have a copy of the memo right here and this is the kind of memo that gets sent out to members of the intelligence community, typically after a major controversy and, given the timing, it clear – seems clearly to be a response to the President’s interview earlier this week on 60 Minutes where he blamed the intelligence community for the rise of ISIS and the memo’s interesting because it specifically says that, for two years, the intelligence community, and I'm reading from it directly, “monitored, assessed and called attention to the expansion of ISIS.” So, that is the case of the Director of National Intelligence James Clapper, but, on the other token – on the other hand, what he says is that none of us could have foreseen what was in the minds of these ISIS fighters and that they were so committed or that the Iraqi military would collapse, but people who have dealt with the intelligence for years, say that simple just doesn’t wash. For example, the DIA, the Defense Intelligence Agency their job is to assess the militaries of foreign governments. 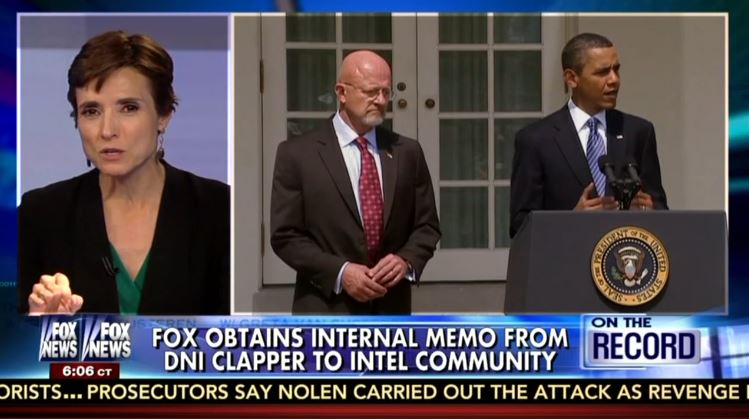 HERRIDGE: Well, this memo seems to lay there, I would argue, that the intelligence community is making the statement, which I think is in conflict with what the President said earlier this week that, for two years, they were monitoring, assessing, and drawing attention to the intelligence. I mean, that, to me is no longer in dispute. The question is whether and why the President and his team failed to act and I think you have to ask yourself whether some of that really lies in the lap of the DNI James Clapper. Critics have said to me, who work in the intelligence community, that they believe, after he was on Capitol Hill with Senator Wyden, and he said, wrongly, that they were not doing data collection on American citizens that because he did not resign he kept his job in some ways he had lost his authority to be a really forceful advocate for the intelligence community with the administration. Maybe that's a fair criticism. Maybe it's not a fair criticism. But that certainly the facts in this case.

[ON-SCREEN HEADLINE: Inside Internal Memo from U.S. Intel Chief to His Staff]

VAN SUSTEREN: Alright, well, you very politely say wrongfully. A lot of people would say that's a lie, but anyway, Catherine, thank you.

HERRIDGE: I try and be polite.

VAN SUSTEREN: Well, indeed you are. Alright, Catherine, thank you.