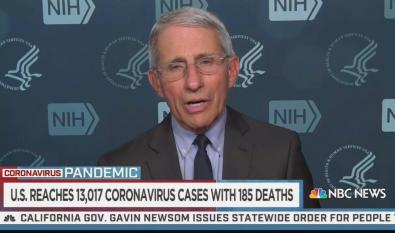 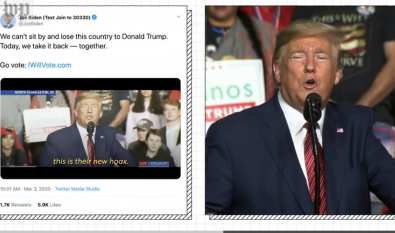 The independence of the “independent fact checkers” is looking very questionable again, leaping into the fray to protest that a tweet featuring a brief video clip of Joe Biden is somehow “Mostly False” (as PolitiFact ruled). Earth to PolitiFact: the network "news" people omit the full context of quotes on a regular basis, but they aren't tagged as "deceptive" editors.

President Trump never called the coronavirus a "hoax." He said trying to turn the coronavirus into the latest version of That Thing That Ruins Trump was a "hoax," like Russian collusion or Ukrainian election interference. But for some reason, Snopes.com admitted he never said the virus was a hoax, but rated his comments a "Mixture" of true and false. That's just sloppy.

This week, the "fact checkers" at both The Washington Post and Snopes.com have thrown the penalty flag at Joe Biden for his repeated claim that he was imprisoned in South Africa in the 1970s while trying to visit Nelson Mandela at the Robben Island prison. Sadly, the networks didn't seem to notice this historical gaffe before the South Carolina debate.

On Thursday, Mike Bloomberg's campaign tweeted out a humorous video trying to make more out of the two seconds of silence when he asked his fellow Democrat candidates ever started a business. (They haven't.) He showed brief clips of the other candidates with blank looks -- from other moments in the debate -- and included the sound of crickets. The "fact checkers" went crazy. Washington Post Fact Checker Glenn Kessler gave it Four Pinocchios. PolitiFact gave it a "Mostly False." Washington Examiner reporter Becket Adams said they're "maybe taking themselves a bit too seriously."

The leftist "fact checkers" at Snopes have routinely gone after the Babylon Bee for writing satires that less intelligent Americans might mistake as real, such as....CNN buying a huge washing machine to wash its news. But at least it's spreading its battle on satire sites in defense of both sides. Two recent "fact checks" defended ... Rush Limbaugh.

Criticizing the so-called "independent fact-checkers" isn't just about whether their fact checking is accurate. It's about which "facts" they choose to evaluate, and which politicians they choose to evaluate and how often. For example, in 2017 and 2018, PolitiFact performed 297 "fact checks" on President Trump, and just nine on Sen. Charles Schumer. They picked an easy "True" this week for Schumer, and avoided his wild claims of Trump's "absolute obstruction" of the Senate trial.

One of the routine ways the "independent fact checkers" demonstrate a liberal bias is by leaping to attack conservatives for making a rhetorical flourish on cable news. On Tuesday, PolitiFact threw a Pants On Fire" verdict at former U.N. ambassador Nikki Haley for saying no government is protesting the killing of Iranian teerrorist mastermind Qasem Soleimani, only Democrats are "mourning the loss of Soleimani."

The conservative American Action Network begins with a clip of AOC saying "This is about preventing a potentially disastrous outcome from occurring next year." Then a female announcer adds: "Now, it’s crystal clear their partisan impeachment is a politically motivated charade.”

One of the maddening acts of so-called "fact checking" is the arrogant attempt to predict future outcomes at election time. It should seem obvious this is beyond the territory of "facts." Now PolitiFact has slapped a "True" label on Elizabeth Warren's cost estimates for her socialist "Medicare for All" plan....even as it appends an "If true" disclaimer to it.

Ashe Schow at the Daily Wire points out that PolitiFact tagged former UN Ambassador Nikki Haley as "Mostly False" for claiming in an e-mail for her new group Stand For America that candidates who are supporting the Green New Deal are "promoting abortion in third world countries to control the population!"

PolitiFact: Trump's a 'Pants on Fire' Liar to Say Impeachment Is a 'Coup'

On Friday, PolitiFact ruled President Trump uncorked a "Pants on Fire" lie when he described the impeachment attempt as a "coup," despite the obvious point that impeachment is designed to remove a president from his office. Since impeachment is constitutional, Trump can't say it.

Someone doesn't like our "Fact-Checking the Fact-Checkers" project. On Thursday, Snopes.com published an article headlined "Did Mainstream Media Outlets ‘Refuse’ to Cover Abortion Doctor Ulrich Klopfer?" They were questioning a Bozell and Graham column, which asserted that the networks failed to report on Dr. Klopfer's Illinois garage full of more than 2,000 dead babies.  Snopes called this "Mostly False" -- because ABC, NBC, and NPR published online articles on Klopfer, and local CBS and PBS affiliates posted something on the Web.