MSNBC to Starbucks Baristas: Write That America Has Always Been Based on 'White Supremacy' on Coffee Cups

Paging Starbucks CEO Howard Schultz. Your "conversation about race" idea has hit a bit of a brick wall among those you seem to believe are on your side — unless your idea of a "conversation" is talking down to anyone who doesn't buy into the idea of "diversity" uber alles, or that this country's founding and history have been predominantly noble.

On Melissa Harris-Perry's show this weekend, the host resoundingly approved when a guy who said that his mission in life is to "get white people to talk about whiteness" suggested that baristas at Starbucks should write “White supremacy has been the organizing principle of America since it was founded” on customers' coffee cups.

Here is the condescension-drenched transcript (bolds are mine): 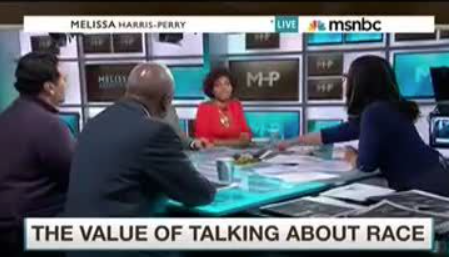 WHITNEY DOW, DIRECTOR/PRODUCER, "WHITENESS PROJECT": It really depends, like, who's talking, who they're talking to, and what are they talking about.

And one of the things, y'know, for me in the work that I've been doing is really trying to get white people to talk about whiteness.

But, y'know, choosing the things about the idea about how you start conversations. Y'know, not everybody at this table, but there's a lot of places in the country where going to Starbucks and getting a cup that says "Race Together" on it could be a really radical moment for them. There's people in my family that that could be a radical moment when they can think about something that they haven't thought about, thought about before.

MELISSA HARRIS PERRY: Well what if instead of saying, "#RaceTogether," it quoted that LBJ, right, and it said something like, y'know, "At the heart of the battle of equality is a deep-seated belief in the dem-" What if instead it gave something substantive?

WHITNEY DOW: Oh absolutely, I'd rather have it say, y'know, "White supremacy has been the organizing principle of America since it was founded."

MELISSA HARRIS PERRY: Ah, there you go! Put that on the cup!

WHITNEY DOW: Yeah, please discuss. Absolutely. (panel laughs) It so — That is the complicated part. But you have to give people access points.

The only "races" I'm seeing here are to the intellectual — and ratings — bottom.