In London, England earlier this week, Wisconsin Governor Scott Walker delivered a speech about global trade at the Chatham House think tank. Given that the group's mission is "to help build a sustainably secure, prosperous and just world," and that it encourages "open debate and confidential discussion on the most significant developments in international affairs," it seemed a reasonable expectation that those present would ask questions relevant to those matters.

Instead, Scott Walker was asked several brazenly off-topic questions, including if he believed in evolution. He refused to answer them. In the case of evolution, he said, "I’m going to punt on that one ... That’s a question that a politician shouldn’t be involved in one way or another," while reminding the audience that "I'm here to talk about trade and not pontificate on other issues."

The smug establishment press apparently wants to believe that Walker's refusal has created a political crisis of epic proportions which they contend (translation: hope) may harm his presidential aspirations.

The matter has bordered on being an obsession at the Associated Press, which has run three national items containing references to the matter. To top this, Jack Dickey at Time.com went to Walker's former high school science teacher, found her disappointed that he didn't answer, and got her to tell him that Walker "could have manned up."

The AP assigned Scott Bauer, who reported from Madison, Wisconsin to cover what Walker said in London. Bauer, likely a member of the far-left, Occupy Movement-supporting News Media Guild, has been hostile towards Walker over his public-sector collective bargaining reforms for four years. On Wednesday, he bitterly insisted that they were responsible for "effectively ending collective bargaining for most public workers in Wisconsin." Well, the unions still exist, and they still bargain, though with a very limited scope, thanks to the Badger State's Act 10.

As to Walker's non-response to the evolution question, Bauer's treatment was relatively even-handed, even though the wire service's headline screamed "We want this to be problem" (bolds are mine throughout this post): 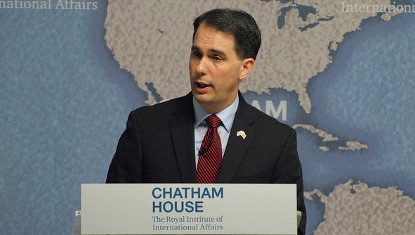 ... Walker, an evangelical Christian and the 47-year-old son of a Baptist preacher, also declined to answer a series of questions about foreign policy, including how the West should combat the Islamic State group, whether the U.S. should arm forces in Ukraine and whether it's wise for Great Britain to remain in the European Union.

"I don't think it's polite to respond on policy in the United States when you're in a foreign country," Walker said when asked about Islamic State. "That's certainly something I'll answer in the future."

... But Walker chose not to answer questions from audience members at the speech, including reporters, that strayed from his domestic policies and thoughts on trade. When giving his answer on evolution, he said, "I'm here to talk about trade and not pontificate on other issues."

"I love the evolution of trade in Wisconsin and I'd like to see an even bigger evolution as well," he said.

Walker's campaign issued a statement later Wednesday in response to questions about his position on evolution.

"Both science and my faith dictate my belief that we are created by God," Walker said in the statement. "I believe faith and science are compatible, and go hand in hand."

His campaign spokesman did not immediately respond to a follow-up question on whether that statement meant Walker believed in evolution or creationism.

Walker also took to Twitter to defend his response. "It's unfortunate the media chose to politicize this issue during our trade mission to foster investment in WI," he wrote.

The next day at AP, likely inspired by leftist hacks who thought they had an issue they could flog, Walker's utterly professional handling of the matter turned into a "hiccup" in a piece co-authorerd by Bauer and Jill Colvin:

WISCONSIN'S WALKER THE LATEST 2016 PROSPECT WITH A UK HICCUP

It ought to be the friendliest of soil for White House hopefuls looking to pad the resume with a little foreign policy experience: a trip to the United Kingdom.

So far, however, the trips to England have been anything but merry for several prospective GOP candidates.

The latest to emerge scathed from a trip across the Atlantic is Wisconsin Gov. Scott Walker, who capped an appearance at the prestigious Chatham House think tank on Wednesday by avoiding a question about whether he believes in the theory of evolution.

... Walker's appearance came a week after New Jersey Gov. Chris Christie's trip to the U.K. was driven off course by a question about childhood vaccinations. Louisiana Gov. Bobby Jindal came in for criticism during his visit abroad when he said Muslims have established autonomous "no-go zone" neighborhoods in some Western European cities where they govern by a harsh version of Islamic law - a notion that had drawn ridicule from British Prime Minister David Cameron, among others.

Quipped Democratic National Committee spokesman Mo Elleithee: "Do any other GOP presidential candidates want to go to London? If so, let us know. The DNC is more than happy to pick up your travel costs."

Mr. Elleithee is clearly confident that outfits like the AP are more than willing to mimic their talking points and copy-and-paste their press releases.

For the record, as noted here and here in January, the establishment press has long recognized the existence of Muslim-dominated no-go zones in Europe — until they decided that doing so is no longer politically correct, especially if that action can be used as a club on a U.S. conservative like Jindal.

If you're an aspiring presidential candidate, says professional crisis manager Eric Dezenhall, right now is "a great time to take a pratfall because it's so far away from anything major."

That's a good thing because so many of the candidates' feet have been sliding out from under them.

... In recent days ... Wisconsin Gov. Scott Walker caught flak for ducking questions and picking a fight with the revered University of Wisconsin.

... For now, Democrats can largely sit back and enjoy the GOP clatter because expected candidate Hillary Rodham Clinton has the experience of the 2008 Democratic primaries on her resume and is expected to face little primary opposition this time.

In case you rubes didn't get Benac's message, it's that these guys are a bunch of presumptive lightweights compared to the all-knowing, all-seeing unstoppable woman who tried to gain general pity by whining about how she and her husband were "dead broke" in 2001, and whose State Department bungled foreign policy so badly that, just for starters, Libya is descending into chaos, and relations with Russia are worse than they've been in almost a quarter-century.

All these attacks from AP have been bad enough, but then along came the stunt of Time.com's Dickey, one which so stunned National Review Online Washington Editor Eliana Johnson that she wondered if was real, or a gag.

Oh, it's real, Eliana. Dickey went to Walker's high school science teacher, got his desired smear quote and deceptively smeared it further in his headline — even though by the piece's end, readers who got that far learned that teacher and student are in fundamental agreement:

Wisconsin Gov. Scott Walker—a leader in the 2016 Republican presidential sweepstakes—prompted some stateside head-scratching this week when he dodged a British journalist’s question about evolution.

Walker said, “I’m going to punt on that one… That’s a question that a politician shouldn’t be involved in one way or another.” He was in London on a trade mission.

Among those who questioned Walker: the chair of his high school science department, Ann Serpe, 73. “Answer the question when they ask you!” Serpe said in an interview. “He could have manned up a bit. That’s what I would tell him.”

Serpe, who taught chemistry and chaired the math and science department at Delavan-Darien High School in Delavan, Wis., before her retirement in 1998, now lives in nearby Elkhorn. She recalls that Walker, her pupil and an advisee in student government, was a bright, committed participant in class. Walker graduated in 1986.

What would Walker have learned in high school? “We taught the theory of evolution, and human evolution, as a prerequisite to understanding biological classification. I went out and looked at my biology textbook just to make sure.”

Serpe says, “I don’t know the dogma of the Baptist church where Scott’s father was the minister, as it concerns evolution. But I do recall that Scott was very accepting of everything in science class. He had a good sense of it.”

... She says she hopes he—”as an intelligent young man”—would understand the importance of scientific thought, that evolution and creation are not mutually exclusive. Walker, who may be two decades removed from Serpe’s classroom, said on Twitter that science still informs his worldview.

Note how "could have manned up" turned into a stern command to "man up" in Dickey's headline.

Sadly, we have to endure 21 more months of this amateur-hour smear-driven journalism — and to expose it at every possible turn.