While it is indeed nice that the Associated Press did a fact check on President Obama's Thursday night immigration address — an item P.J. Gladnick at NewsBusters covered on Saturday — it would have been even nicer if the wire service better described as the Administration's Press had fact-checked Julie Pace's and Josh Lederman's awful Friday evening backgrounder on the speech.

The AP pair couldn't even get through their first three paragraphs without distorting beyond repair their presentation of allegedly "soaring deportations."

Pace is perhaps best known in these parts as the reporter who last helped the wire service sit on the story of secret negotiations between the Obama administration and the Iranian government for eight months. After I criticized Pace for openly bragging about AP withholding it knew — and what should have been made known to the public — on "Fox News Sunday" a year ago, the wire service's Paul Colford published a "Back Story" item insisting that "AP did not sit on the story for several months." Too bad for Colford that a journalist at another news outlet who had apparently separately learned of the negotiations tweeted that "We both had versions of it independently early & were asked to not publish til end of Iran talks."

In other words, an outlet which calls itself "The Pulse of the Middle East" and the self-described "Essential Global News Network" were both equally willing to be good little lapdogs.

As to Lederman, gosh, where does one start? A Reuters reporter at Maryland Obama gubernatorial race campaign appearance in October noted "early departures of crowd members"; all Lederman claimed to have seen was a "rowdy rally." In September, he tweeted — and then deleted — an ignorant claim that Obama's alleged anti-ISIS coalition with "5 Arab nations ... helps him distinguish himself from (the Iraq War coalition of) Bush." In August 2013, after President Obama issued a series of gun-related executive orders, Lederman only called them "steps" and "actions."

When Pace and Lederman team up, the distortion often ramps up. As I summarized here last year, "At the Democratic Party Convention in September 2012, Lederman and colleague Julie Pace tried to pretend that Obama had no idea that there was no mention of 'God' in the Democratic Party's platform, and that it also failed to name Jerusalem as Israel's capital. The Politico, in a rare example of genuine journalism, caught the White House in contradictory stances, (with the administration) first claiming that Obama knew about the language in advance and then trying to walk it back."

Here are the first three paragraphs of the AP pair's Saturday morning report:

For Obama, a long road to immigration order 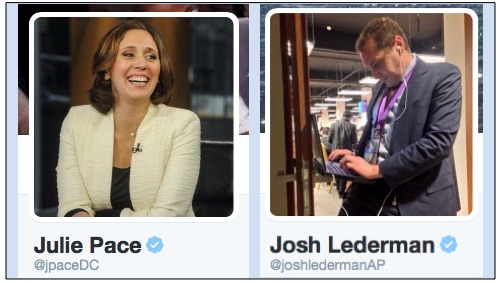 Immigration legislation on Capitol Hill was going nowhere. Deportations were nearing 2 million under Obama's watch. And the president was resisting calls to use executive actions to address the issue.

In early March, Obama's usually reliable supporters vented their frustration with a one-two punch to the White House: a scathing speech by a prominent immigration advocate who derided the president as "deporter in chief," then a threat from Hispanic lawmakers to vote on a resolution criticizing Obama for the soaring deportations.

The following chart from that hard-right publication known as The New Republic (just kidding; most readers know that TNR is percehd firmly on the left) shows what a sham the AP pair's stated claim of "soaring deportations" during the Obama administration really is:

"Deportation" is still a commonly used term which Homeland Security stopped using years ago. Proper use of the popular term requires the inclusion both "returns" and "removals," which are distinguished as follows:

For the most part, the Obama administration is “deporting” people it catches in the act of entering the country illegally.

In fact, the Department of Homeland Security’s own guidelines distinguish between “removals” and “returns.” According to DHS, a removal is defined as “the compulsory and confirmed movement of an inadmissible or deportable alien out of the United States based on an order of removal.”

Returns, meanwhile, are defined as “the confirmed movement of an inadmissible or deportable alien out of the United States not based on an order of removal. Most of the voluntary returns are of Mexican nationals who have been apprehended by the U.S. Border Patrol and are returned to Mexico.” The primary difference between the two categories is that removals are processed by ICE, while returns are not.

(Aside: It's nice to see that someone will still use the definitionally accurate term "alien." Too bad the AP isn't one of them. The AP Stylebook won't even permit "illegal" or "undocumented.")

So-called Hispanic advocacy groups which are calling Obama "the deportation President" disingenuously complain only about "removals," which are indeed cumulatively approaching 2 million on Obama's watch. But that doesn't represent all "deportations" by any stretch — and deportations are in reality way down.

Immigration activists are deliberately creating the false impression that Obama administration has been more harsh in its enforcement efforts than the Bush 43 and previous administrations. That is clearly not the case. Julie Pace and Josh Lederman clearly fed that dishonest narrative to the nation in their report.

They should know better.

I think they do know better, and don't care.