Interviewing Dem Congressman, CNN's Jim Acosta Grovels: 'I Have to Ask ... Forgive Me'

Jim Acosta, a legend in his own mind for shouting impertinent questions at President Donald Trump and Press Secretary Sarah Sanders at inappropriate times while insisting that he "won't be shushed" or "be the wallflower," interviewed Congressman Ruben Gallego Monday on CNN's Situation Room about his position on and the wisdom of calls by many Democrats, including three U.S. senators, to abolish the Immigration and Customs Enforcement Agency.

After the Arizona Democrat twice dodged his questions, Acosta, the self-described tough guy, groveled: "I have to ask, I have to pressure you on this, and forgive me, congressman."

Gallego and many other Democrats interviewed in recent days have failed to directly answer point-blank questions about whether they, their party, and key colleagues in their party support or oppose abolishing ICE, and about whether advocating ICE's abolition is a winning midterm electoral strategy. 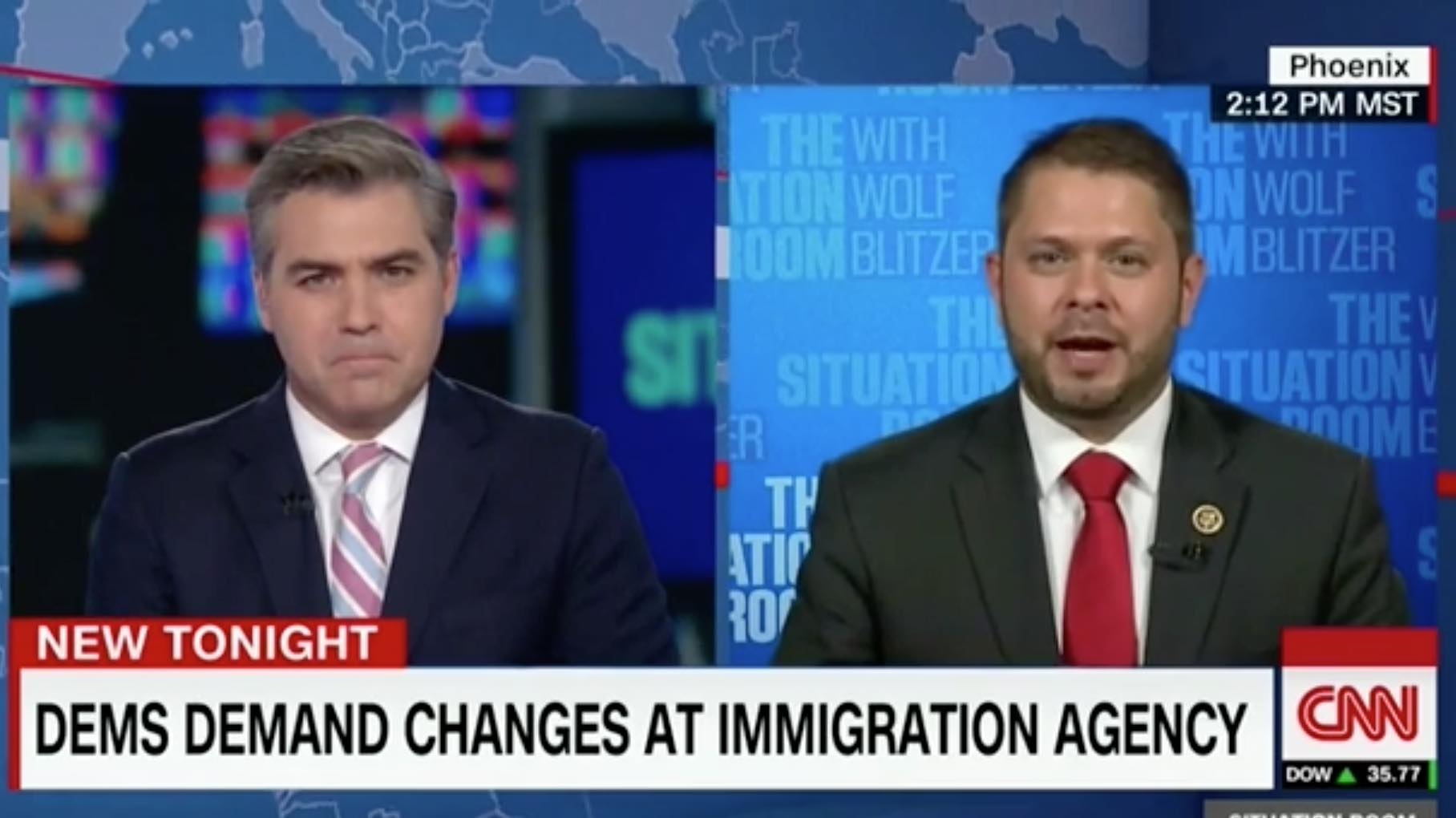 In the video segment below, after Acosta's first question, Gallego, apparently pretending to speak for fellow Democrats who have said exactly the opposite, claimed that "We don’t want to abolish ICE," saying that he and other party members only want to "make sure it’s doing the job properly."

Acosta then asked a more direct question about whether advocating ICE's abolition "is a bad idea." Gallego again denied that "most Democrats want this" — which, while probably true, does not represent the views of prominent Democrats and activists who have been recently been making the most noise. He insisted that Democrats are only interested in "restructuring" the agency and "holding (it) accountable." The congressman then brazenly mischaracterized the agency's deportation efforts, which remain focused "on individuals who pose a threat to national security, public safety and border security."

After Gallego's second dodge, Acosta become a pathetic lapdog, begging the Democratic congressman's forgiveness for trying to do his job:

"But I have to ask, I have to pressure you on this, and forgive me, congressman ..."

During the segment, CNN's chyron ("DEMS DEMAND CHANGES AT IMMIGRATION AGENCY") falsely portrayed what protesters spent the past weekend demanding in cities across the U.S., i.e., ICE's abolition, not "changes" at the agency.

After three dodges by Gallego, Acosta meekly ended the interview:

"Congressman Ruben Gallego, we appreciate your time. Thank you very much for joining us."

That's our Jim. He's just as tough on Dems as he is on Republicans and conservatives. Just ask him. (That's sarcasm, folks.)

JIM ACOSTA: Many in your party, though, we should point out, Congressman, it's a growing number, they want to abolish ICE, the Immigration and Customs Enforcement agency. Do you support abolishing ICE? What is your position on that?

RUBEN GALLEGO: Well first of all, it’s a hash tag. I think we have to actually understand what the policy perspective (is) that people want. We don’t want to abolish ICE. We want to make sure that ICE is actually doing its job properly and not being abused by this White House.

Instead of actually screening for a criminal element that does exist within the illegal-alien community, ICE over the last year to two years has been going after mothers and fathers, people that are otherwise innocent except for crossing the border. They actually deported a doctor who had been in this country for 20 years for a misdemeanor the he had done when he was 18 back to a country he’d never been in the Middle East.

We want to see enforced — the border, our border laws enforced. We want to see (the) bad criminal element that exists within our immigrant community out. We also don’t want to see these abuses that are occurring under the White House. And let’s, you know, let’s be clear. This is the same White House that has already separated thousands of families and created 2,000 orphans to this date. So for us to trust the President that he's actually going to judiciously use any immigration force is dangerous. So, us asking for restructuring I think is perfectly fine.

ACOSTA: But Congressman, there are some in the Democratic Party who do want to abolish ICE. I mean, that is a fact, right? I mean, do you think that they’re misguided in calling to replace or change ICE? This is a law enforcement agency that does have to enforce the law. I know you may disagree with how the President is using that agency, but I’m just curious, do you think this is a bad idea?

GALLEGO: I think restructuring and actually holding accountable any governmental agency that is, you know, at this point acting rogue is important.

I disagree with this idea that all Democrats or even a majority of Democrats are asking for ICE to, quote-unquote, "be abolished." That is a hash tag. What is really happening is that we want to keep this organization accountable. We do want, of course, to have immigration enforcement. But we don't want them to actually just be focusing on mothers and fathers. We need them to go after the hard-core criminals, which they’re not. They’re just trying to rack up the numbers and going after innocent people that are here that are workers that are the, that own companies, instead of actually going after the hard-core criminals.

ACOSTA: But I have to ask, I have to pressure you on this, and forgive me, congressman, but —

GALLEGO: Well, you know, knowing both women, I know them to be very responsible. By saying they’re trying to abolish it doesn’t mean they’re trying to stop all types of immigration enforcement. What they're essentially saying is that we need to make sure that this agency continues to be held accountable.

But the element that has taken over ICE right now that is actually deporting mothers, fathers, separating families, going after people that have been in this country for years, some of them actually permanent residents, is something that is disgusting I think to American values, and is being abused by this president. But to say that either of those senators somehow want to "get rid of ICE" and have no enforcement I think is totally erroneous.

ACOSTA: Okay. Congressman Ruben Gallego, we appreciate your time. Thank you very much for joining us.