In the past 18 months, CNN White House reporter Jim Acosta has suggested President Trump is a “racist,” while whining that Trump’s complaints about press bias were doing “real damage to the First Amendment,” speculating that some day we might see “a dead journalist on the side of the highway, because of the rhetoric coming out of the White House.”

Then on Wednesday’s Jimmy Kimmel Live!, Acosta said this about his Trump coverage: “Listen, when I covered Barack Obama, I was just as tough on him. People might not believe that.”

As tough on Obama as he’s been on Trump? Let’s investigate.

On January 12, 2009, just one week before President-elect Obama was sworn in, Acosta had already placed his Inaugural Address on par with that of Abraham Lincoln: “Barack Obama has some big shoes to fill, roughly the size of the ones up on the Lincoln Memorial....Obama’s Inaugural Address may be more than the speech of his lifetime. Historians and speechwriters say it could be one for the ages.” 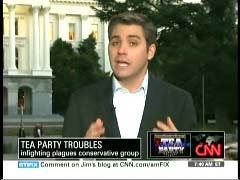 Acosta saved his rough stuff for Obama’s opponents in the Tea Party. On February 3, 2010, he tried to help the President by portraying conservative protesters as kooks: “Take recession-raging conservatives and independents....Add a Democrat to the White House....And you get the Tea Party.”

In that piece, Acosta displayed himself confronting a protester about showing proper respect for Obama: “Do you think having the President dressed up as the Grim Reaper is a little over-the-top?...You think it’s appropriate?”

Can anyone recall Acosta ever asking any anti-Trump protesters if they were being “over-the-top” in their ridicule of this President?

In June 2011, Acosta sounded like an Obama spokesman as he disparaged conservative proposals for a “cut, cap and balance” approach to ending budget deficits: “It’s not exactly cut, cap, and balance,” Acosta smirked on CNN Newsroom. “It may be more body-slam and pile-driver.”

In 2012, Acosta took a break from covering Obama to shadow GOP presidential candidate Mitt Romney. Acosta’s coverage of Romney’s trip to Europe that summer was so hostile to the Republican (“Romney Trip Begins in Shambles”), Team Obama built a campaign ad around it.

At Obama’s second Inauguration, Acosta was positively giddy while covering the parade. “You know, I feel like I should pinch myself right now,” he told anchor Wolf Blitzer. “I can’t believe I have this vantage point of history in the making.”

While Acosta has made a name for himself scolding the Trump White House for its treatment of the establishment media, he thought it was smart and successful politics when the Obama White House circumvented the national media to sell ObamaCare in 2014. Here’s Acosta talking to CNN daytime anchor Carol Costello on April 1, 2014: 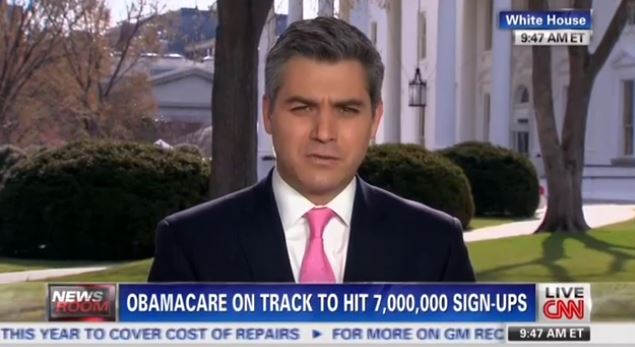 You know Carol, if – if ObamaCare were a patient, this would be a pretty miraculous recovery....According to a senior administration official – yes, they are on track to hit seven million signing up, as of this week. And that is – that is pretty big news over here at the White House. They’re reacting with a lot of glee and happiness, I can tell you....

Administration officials, in the last six weeks, did 300 different radio interviews. Valerie Jarrett, a senior White House official, alone did 80 radio interviews, according to a White House official. Those Web videos, like the one you just showed with Zach Galifianakis, attracted 30 million views in the last six weeks. And they had about 100 celebrities and athletes tweeting out their support for ObamaCare. So, for all of those people out there who were – you know, sort of complaining that they didn’t go to through traditional media – which is something you heard over here at the White House – among people in the press corps, there was some grumbling about this alternative media strategy did work, in many ways, for this White House.”

On September 2, 2015, when President Obama agreed to a nuclear deal with Iran, Acosta painted it as an accomplishment: “This a major diplomatic victory for the President....This is something that will shape the Obama legacy...”

Then on May 8, when President Trump announced he’d be ending the deal, Acosta painted it as a reckless gamble: “President Trump is rolling the nuclear dice...By all appearances, the Trump administration does not have much of a plan for stopping Iran from pursuing nuclear weapons at this point.”

The two Presidents are very different, of course, as are the policies/controversies/events that shape coverage of their administrations. But no one who’s paying attention can believe that Jim Acosta was “just as tough” on President Obama as he has been on President Trump.