CNN's Jim Acosta Defends His Anti-Trump Bias: 'Let Other People Be the Wallflower'

On Friday, Washington Post media reporter Paul Farhi asked the question “A briefing room clash may be good TV, but is it good journalism?” The Post mostly answered “yes,” and Farhi never compared today’s clashes to anything that happened under Barack Obama. The journalists who badgered Trump aide Stephen Miller “say they have no regrets for aggressively seeking answers,” Farhi reported. 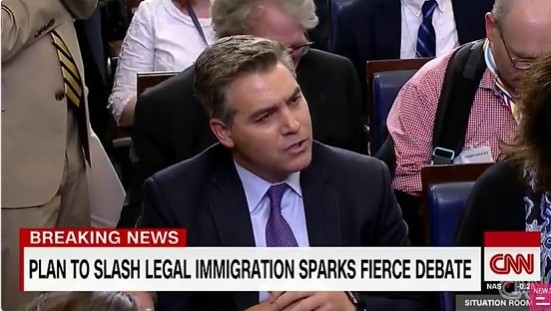 “I was pressing the guy for a statistical justification for a policy that will affect millions of Americans, and he decided to deliver a speech,” says [New York Times reporter Glenn] Thrush, via email. “The studies he cited are well-known and have been interpreted in a lot of different ways. I wanted to see if he’d acknowledge that ambiguity.” He added, “If you aren’t stopping a politician from blah-blah-blah-ing, you’re not doing your job.”

[CNN’s Jim] Acosta was similarly unmoved: “As my mother told me recently, ‘Let other people be the wallflower,’ ” he said in a brief interview. “If quoting from the Statue of Liberty is pushing too hard, I’m going to keep pushing.”

Acosta offered several more takes on CNN, opining later Wednesday that “I think what you saw unfold in the briefing room is that he [Miller] really just couldn’t take that kind of heat and exploded before our eyes.” And: “It’s not often you’re accused of a cosmopolitan bias from someone who went to Duke University wearing cuff links in the White House briefing room.”

Farhi didn't interview any conservative critics for reaction, but we would have directed him to that wallflower Jim Acosta's "best week ever" suck-up question to Obama two years ago:

ACOSTA: I wanted to ask you about what some people are calling 'your best week ever' last week. You had two Supreme Court decisions supportive of the Affordable Care Act and of gay rights. You also delivered a speech down in Charleston that was pretty warmly received. It seems that you've built up some political capital for the remaining months of your presidency. I'm curious, how you want to use it? What hard things do you want to tackle at this point?

PRESIDENT BARACK OBAMA: In terms of my best week – now, my best week, (attendees laugh) I will tell you, was marrying Michelle. That was a really good week. (laughter) Malia and Sasha being born – excellent weeks. (laughter)

OBAMA: Yeah. There was a game where I scored 27 points. (laughter) That was a good week.

The liberal media had a wallflower standard under Obama. The one nod to conservative or Republican opinion was a tweet from former Bush press secretary Ari Fleischer: “@acosta an advocate for a political point of view, not as a neutral reporter. He’s not even playing the devil’s advocate. This is bias.”

Maybe we would have also asked Farhi to remember in his story that Acosta's CNN was embarrassed by their staff handing over town-hall questions to Hillary Clinton in advance. So maybe their aggressive poses are more partisan than journalistic.

Farhi offered a hint of debate between journalism-school deans, starting with the leftists at Berkeley:

Edward Wasserman, dean of UC-Berkeley’s journalism school, says viewers were well served by the Acosta-Miller throwdown. “If [Acosta] had been more timid and deferential, those of us who watched it would have felt underserved and underrepresented,” he said. “It certainly had a bruising and edgy element, and there was no love lost, but at the same time, it felt illuminating.”

He added: “This is the way you provoke a response that exposes the thinking behind policy. . . . People aren’t normally privy to [the reporting process], but that’s what a journalist is supposed to do.”

Lucy Dalglish of the University of Maryland gently disagreed, and then fell on her face:

Some of American journalism’s giants, she said, showed that it was possible to be both insistent and persistent without being abrasive or sparking an argument. Her shortlist: Sam Donaldson, Ted Koppel and Dan Rather.

DAN RATHER? He was never abrasive? Did she miss Rather in the White House with Nixon, when Nixon asked him if he was running for something? Did she miss Rather with Vice President George H.W. Bush, lecturing on national TV that he’s shamed America in the eyes of the world?

Farhi could have noted the Washington Post feels differently when the president is a Democrat. On June 20, 2012, Post columnist Dana Milbank wanted Neil Munro of the Daily Caller fired for interrupting Saint Barack during a Rose Garden statement on his refusal to deport “Dreamers,” the children of illegal immigrants:

As is now widely known, one of Carlson's reporters, Neil Munro, interrupted Obama midway through a Rose Garden statement on immigration Friday, demanding to know why the president was favoring "foreigners over American workers" and informing him that "you have to take questions." Later, when Obama tried to address Munro's topic, the journalist continued to interrupt and hector. A reporter heckling a president in the Rose Garden was an outrageous and unprecedented affront to the office.

The column was titled “Stinking Up the Rose Garden,” and Milbank concluded:

I've criticized Obama and his predecessor for taking too few questions, and I've at times scolded the press corps under both presidents for being soft in its questioning.

I also don't join the charge that Munro is necessarily racist (although some Obama disparagement surely is), and I don't agree with those who say the White House should revoke his press pass. But I think Carlson should fire him.

On September 22, 2015, Milbank even proposed voters should shut up Trump and Ben Carson for being anti-Muslim: “Voters, it's up to you to shut Trump and Carson up.”