On Wednesday, Starbucks added itself to the long list of companies announcing moves benefiting employees while crediting the tax law passed in December.

The company's strong leftist pedigree is making things awkward for the left-leaning press. Among other things, it has had to "forget" that just three months ago, Howard Schultz, Starbucks' executive chairman and former CEO, slammed the Republicans' tax-cut plan as "fool's gold," claiming that corporate America "does not need" a sharp cut in its top tax rate.

CNN Money reported and observed the following about Schultz's appearance at the New York Times DealBook Conference in Manhattan in October: 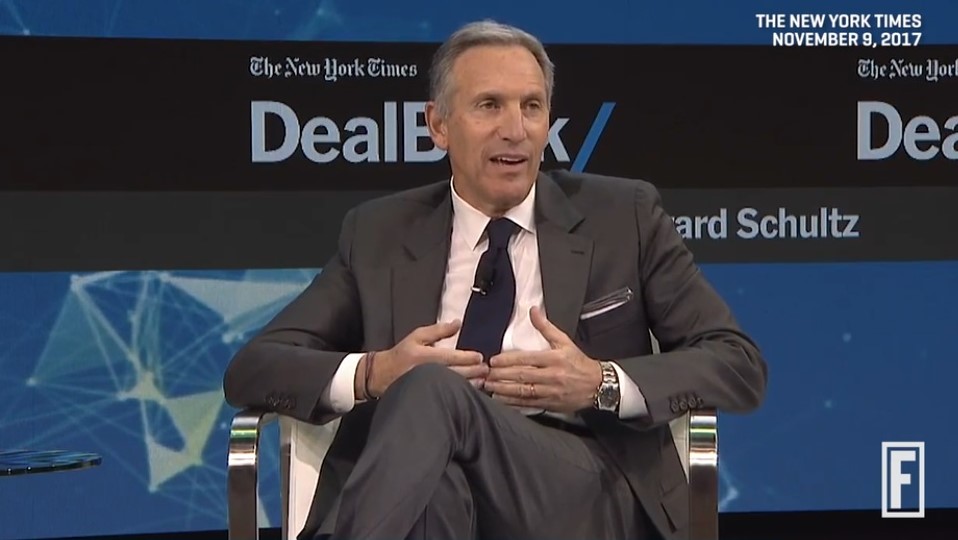 Schultz, who stepped down as Starbucks CEO this year, said corporate America "does not need" the proposed corporate tax cut from 35% to 20%. (The December law ultimately lowered the top rate to 21 percent.)

"The tax cut proposal is not going to create a more leveled playing field and a more compassionate society," he said.

Of course, Schultz, a Democrat who backed Hillary Clinton in 2016, could merely be positioning himself for a long-rumored run for president.

It would be pretty difficult for a candidate Schultz to square his company's latest action with what Democrats currently say they will do about the tax law if they regain control of Congress in November's midterm elections.

Despite bonuses and other benefits which have now reached 2.5 million workers and cuts in federal withholding which 90 percent of workers will see reflected in paychecks beginning in early February, Democrats beholden to their far-left base appear determined to run on repeal. One potential presidential aspirant, Massachusetts Senator Elizabeth Warren, "responded to U.S. Senate Candidate Beth Lindstrom’s tax cut challenge by admitting she would vote to eliminate the tax cuts if a repeal bill comes before the Congress."

There is substantial irony in the fact that, despite his strong opposition, Schultz acknowledged in October that he would expect Starbucks to use part of an enacted tax law's savings "obviously (for) our people for benefits."

Starbucks has done that, at an announced cost of $250 million. In "changes affect(ing) about 150,000 full-time, part-time, hourly and salaried employees," the company, according to the Associated Press, is "giving its U.S. workers pay raises and stock grants ... this year" (of "at least" $500 to $2,000, depending on position and seniority), giving all employees the ability to earn paid sick time off, and expanding "parental leave benefits ... to include all non-birth parents."

The AP's Joseph Pisani and CNN Money's Nathaniel Meyersohn respectively noted that "other factors are affecting retail working conditions," and "tight labor market pressures (are causing) companies to raise wages and expand benefits." Neither reporter could tell readers whether the companies could have done anything about these conditions without the tax law's enactment.