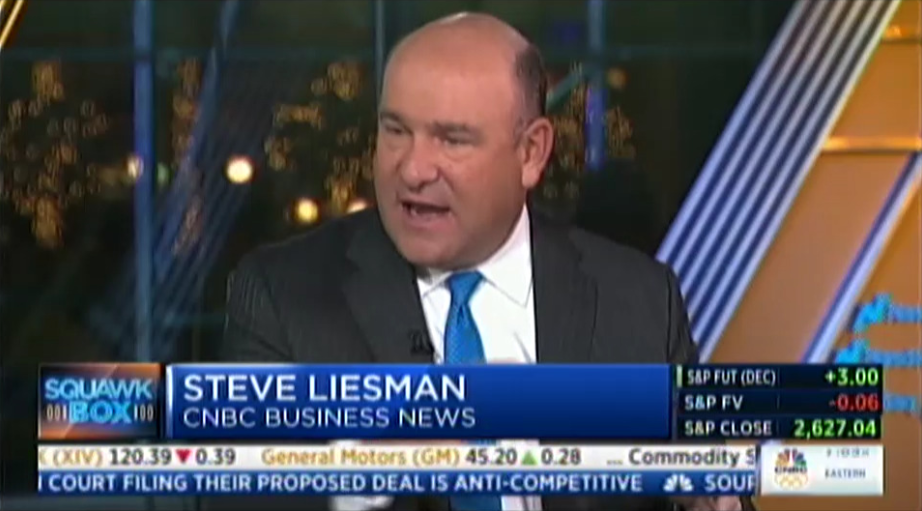 At CNBC Wednesday morning, just after the release of the government's GDP report, Squawk Box panelist Steve Liesman appeared to do everything he could to downplay the significance, and even the relevance, of the 3.3 percent annualized growth estimate.

At the end of the segment, he gave away his ignorance when he expressed outrage that the tax bill currently under consideration in Congress, while eliminating or significantly curtailing individual taxpayers' ability to deduct state and local taxes, leaves business deductions for state and local taxes intact. He, and show host Becky Quick, should know that it's bogus to try to make such a comparison.

Bringing up issues he never raised during the Obama era, Liesman first questioned why the markets should give the government's reported estimate of 3.3 percent annualized growth so much importance, given how much it will be revised over "the next five years." Everybody knows that, Steve, but you've got to start somewhere.

Liesman then ridiculed the "pretense of precision" the government has in reporting each quarter's GDP figure to the nearest 0.1 percent.

Both of those statements are pretty amazing coming from a guy who just a few years ago was lobbying incessantly for the government to modify its annual first-quarter estimates by a few tenths of a point for "residual seasonality." (A thorough study of the alleged "residual seasonality" problem, which supposedly understates first-quarter growth every year, reveals that it's a phenomenon which is strongly correlated with whether a Democrat is in the White House.)

Perhaps inadvertently, Liesman then cited a note written by another economist who believes that labor is going to garner most of the benefits of economic growth next year. That's a de facto admission that this is a change from the economy seen under former President Barack Obama's Keynesian regime and Fed Chairpersons Bernanke and Yellen, when the benefits of growth mostly went to those at the top, i.e., the very "1 percent" Obama and the left criticized in speeches and during political campaigns.

The panel then ventured into a discussion of the tax bill pending in Congress, with Liesman predictably saying every economist he talked to doesn't like it. Host Joe Kernen pushed back, mentioning a group of 8 economists who said they support it. Later Wednesday morning, 137 economists released an open letter to Congress supporting GOP tax reform bill, saying that "Economic growth will accelerate if the Tax Cuts and Jobs Act passes, leading to more jobs, higher wages, and a better standard of living for the American people."

Finally, co-host Becky Quick informed the panel that corporations still get to deduct state and local taxes, as if that's some kind of outrage. Incredibly, Liesman took the bait, saying that it made him "really angry."

Here is the video of yesterday's segment, which began with the network's Rick Santelli relaying the news:

Transcript (beginning at the 1:08 mark; bolds are mine):

STEVE LIESMAN: Yes. Which is there's going to be a third read, and they're going to continue to revise this over the next five years. And the error rate on this, Joe, is like, greater than a percentage point.

LIESMAN: So the best you can get is the gestalt of growth that's out there. Are we growing a little bit faster, a little bit lower than growth?

The precision to the tenth of a decimal point which the government reports does not exist. But, folks, let just pretend it does for a moment, and I'll tell you what happened here.

Translation: "I've done everything I possibly can to let viewers know that this news is really unimportant, but now I'll analyze it anyway." Liesman never ridiculed the government's report in this manner during the Obama era.

Unless I'm missing something, and I don't think I am, the public sector isn't part of "corporate profits."

LIESMAN: And Ian Shepherdson of Pantheon, a good friend of Squawk Box, out with an interesting note this morning. He said the mix of income in this country is about to shift from being very high towards the profit scale and being much more towards labor and wages. He says that's what's coming in the next year. And the question becomes, is the market prepared for this? Is the market prepared for this shift? It doesn't mean that nominal growth goes down, it means who gets how big a slice of the pie?

Why are you shaking your head?

KERNAN: It's what everybody's been wanting.

It's amazing what can happen when you don't run the economy for the express purpose of benefiting big banks, big political contributors, and other cronies. All of a sudden, virtually everyone gets a chance to benefit from stronger growth.

LIESMAN: Every economist I've hung out with thinks it's a terrible idea.

KERNEN: Because they say we're at 4 percent unemployment, so it's not the right time to cut taxes. But all of them -

KERNEN: Ah, okay. It's never going to be perfect. It's always going to people that don't like it.

LIESMAN: I'm not commenting, I'm simply passing along — (who do you think you're fooling, Steve? — Ed.)

KERNEN: What about the 8, what about the 8 economists that wrote the thing in the Journal the other day that did like it? Those aren't the guys you talk to, so they don't count.

LIESMAN: They didn't actually praise the bill. They praised the concept —

BECKY QUICK: No, Larry Kudlow said that the corporate side is great, but he is not a fan of the individual side. Bob Corker said the same thing on our air.

KERNEN: A lot of those guys live in New York and New Jersey, too. Anyway, Steve, they're not getting their write-off for state taxes.

LIESMAN: Neither are you.

KERNEN: I'm okay with that.

QUICK: But you know who does get a state write-off still?

LIESMAN: They keep their state write-off?

QUICK: They keep their state write-off, which is —

A significant percentage of each dollar of revenue earned by corporations goes to pay income, property, excise, and other taxes, e.g., severance taxes for oil companies, at the state and local level.

If companies couldn't deduct those legitimate costs in determining their federal tax liability, their effective federal tax rate would sharply increase. Doing this would virtually nullify, and perhaps in some cases more than nullify, the entire point of Congress's current corporate tax relief effort.

The comparison between the treatment of "income" for individuals and households, which is really gross income from all sources (wages, interest, dividends, etc.) and "income" for businesses, which is "profit after deducting all expenses from doing business," is so obvious that it shouldn't even be a topic of discussion on a financial show with supposedly sophisticated panelists. Becky Quick and Steve Liesman, with their hysterical reaction to Congress leaving legitimate taxes-paid deductions for businesses alone, have demonstrated that they are not sophisticated financial panelists.