Early that evening Pacific Time, Morford justified the extraordinary number of death threats Environmental Protection Agency head Scott Pruitt has received and the resulting high cost of his security as deserved, given that Pruitt's conduct and policies as agency head represent "death threats to the world and all who live on her."

The Chronicle's mini-bio at the end of Morford's column indicates that they just love this guy, describing him as a provider of "hyper-literate, award-winning commentary and cultural criticism."

What horse manure. Morford has become "progressively" more unhinged since the turn of the century.

Morford's column began by quoting a CNN report that Pruitt's "number of people guarding him (has risen) to 30," and that the EPA Director has received "at least four to five times the number of [death] threats" as his predecessor.

Now let's look at Morford assessment of Pruitt (HT Ed Driscoll at Instapundit; bolds are mine throughout this post): 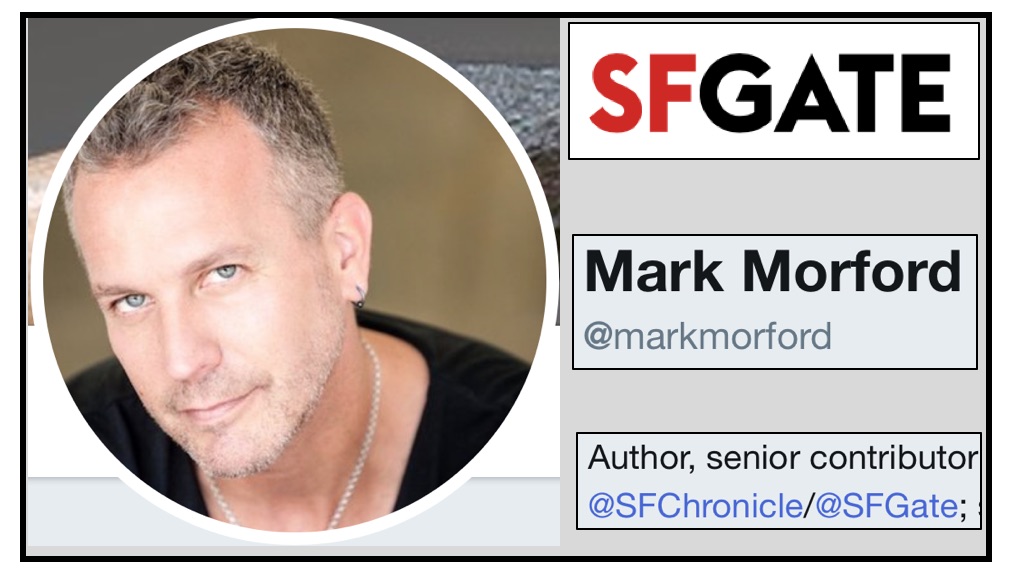 ... Behold, this banally evil, milquetoast, science-denying government administrator who now, due to an unprecedented, surprising-but-then-again-not-really number of death threats – the agency has already investigated 70 so far – demands a round-the-clock security detail, one totaling dozens of henchmen making six figures apiece and costing taxpayers more than $2 million a year, a ridiculous situation unheard of in the modern era. It is yours to ponder why.

Here's a wild guess, Mark: The far-left has become alarmingly prone to violence at a level not seen since the SDS/Black Panther/Weathermen days of the 1960s and 1970s, partially thanks to the dreadful examples set by columnists like you, "journalists" like Piers Morgan, and negligent "mainstream" Democrats. These alleged adults, all of whom one would expect to know better, either believe that death threats should come with the territory when you express views and carry out policies which aren't in lockstep with leftist dogma, or have been intimidated into silence.

Let's skip to Morford's "red meat" — a term the press almost exclusively reserves for conservative sentiments, but which perfectly fits the circumstances here — which followed paragraph after paragraph of "the sky is falling" dreck, which included an oh-so-predictable "we're all going to die from climate change" rant:

Shall we sum up? Scott Pruitt, the pallid, oily anti-environment corporate shill beloved by the least palatable humans in the corporate world, is getting a lot of death threats, up to five times more than any E.P.A. head in history.

Wherever they are coming from, it does make a warped, dangerous sort of sense. Unless you belong to that literalist, desperately unloved sect of right-wing sycophants who sacrificed all your critical thinking skills at the altar of neo-Nazi, pro-Trump Breitbartism, you surely understand: this is no advocacy for violence. Only the smallest of minds and most unstable of souls would mis-read my words in such a way.

This is but a simple acknowledgement: when you send death threats to the world and all who live on her, the world will, quite naturally, send them right back.

Sure, Mark. We recognize that you're not directly advocating violence. That doesn't give you a pass. Given your justifications for the outrageous and frightening level of threats Pruitt has received, it's reasonable to wonder if you're okay with the possibility that it might happen. If it ever does, why shouldn't we think that you'll be either tacitly or even publicly pleased with the result, and blame a supposedly defensive response from "the world" or "Mother Nature," and not the person who carried out the violent act?

As to Morford's past, it didn't took all of about five seconds to learn that Morford was among three Chronicle staffers suspended in 2001 for a column that SFgate.com's boss at the time "said was 'grotesquely outside the standards that we have.'"

I'll say, given that Morford's online post effectively condoned adult-child sex after an adult women was arrested for having sex with a 13 year-old boy in Philadelphia:

... Morford wrote ... "I wrote that from my own experience as a teenage boy, we shouldn't jump on this as a bad thing in every case ... I would bet that most teenage boys in this country would say that given the choice, this would be a positive adventure for many of them. ... For teenage boys, there are things far worse than having older females perform a sex act in a parking lot."

The act Morford condoned is by definition a crime known as statutory rape. 13 year-olds cannot legally give consent to adult-child sex.

Some leftists have shocking attitudes in this area. They include now-HBO show host Bill Maher, who said during his Politically Incorrect show's run, in a Truth Revolt blogger's paraphrased words, that "it isn’t possible for a woman to rape a boy," and actor George Takei, who in February told shock jock Howard Stern that he was okay with having been molested when he was 12 by a boy who was 18 or 19 at a summer camp, because he found the perpetrator "attractive."

“These are the last days of relative calm before we start bombing and massacring hundreds of thousands of people and in so doing enter into what many believe will a very long, drawn-out, insanely expensive, volatile, destabilizing, completely unwinnable war against a cheap thug of an opponent who has negligible military might and zero capacity to actually harm the U.S. in any substantive way.

(During his presidency, Barack Obama undid the results of that victory by prematurely withdrawing all U.S. troops at the end of 2011, creating a power vacuum which gave rise to ISIS. Clearly reluctant journalists have been forced in the past week or so to acknowledge that a "successful campaign to defeat ISIS militarily" has recently been achieved.)

Morford's archive page at SFGate.com is a collection of Trump and Conservative Derangment Syndrome screeds like no other. The headlines alone make it clear that it woud be impossible to select just a few of them for a "worst of" list — though one caught my eye, because its headline makes a prediction to which he can be held: "LA Olympics 2028 - Unbearably hot, partially underwater." He opens that column with another prediction: "Happy thoughts first: Donald Trump will, almost surely, be long dead, or long imprisoned, and long shamed into historical oblivion."

As a result of the 2001 column mentioned above, Morford "was told the suspension might result in his being fired."  We would all be so much better off now if the Chronicle had followed through and done the right thing then.