In its roughly 30th installment of "Red Century," a weekly series of op-eds dedicated to the notion that 20th century communism wasn't all that bad, the New York Times performed a bit of perhaps inadvertent recycling.

On Monday, Helen Gao, in an item the Times appears to have had the good sense to keep out of its print edition, argued, with "crucial caveats" (but not enough of them) that "the Communist revolution taught Chinese women to dream big." Times columnist Nicholas Kristof infamously said much the same thing in 2005.

Kristof was reviewing a just-released book, Mao: The Unknown Story, which, based on a decade of research, placed the death toll under Chinese dictator Mao Ze Dong at "well over 70 million."

Yet there he was, even after admitting that the book "demolishes every pillar of Mao's claim to sympathy or legitimacy," quibbling over the authors' body count and defending, or at least excusing, Mao's legacy (bolds are mine throughout this post):

... I have reservations about the book's judgments, for my own sense is that Mao, however monstrous, also brought useful changes to China. And at times the authors seem so eager to destroy him that I wonder if they exclude exculpatory evidence.

... In Moscow, he offered to sacrifice the lives of 300 million Chinese, half the population at the time, and in 1958 he blithely declared of the overworked population: "Working like this, with all these projects, half of China may well have to die."

... Finally, there is Mao's place in history. I agree that Mao was a catastrophic ruler in many, many respects, and this book captures that side better than anything ever written. But Mao's legacy is not all bad. Land reform in China, like the land reform in Japan and Taiwan, helped lay the groundwork for prosperity today. The emancipation of women and end of child marriages moved China from one of the worst places in the world to be a girl to one where women have more equality than in, say, Japan or Korea. Indeed, Mao's entire assault on the old economic and social structure made it easier for China to emerge as the world's new economic dragon.

Ah yes, the "emancipation of women." That's where Monday's op-ed by Gao, "a social policy analyst at a research company," takes over: 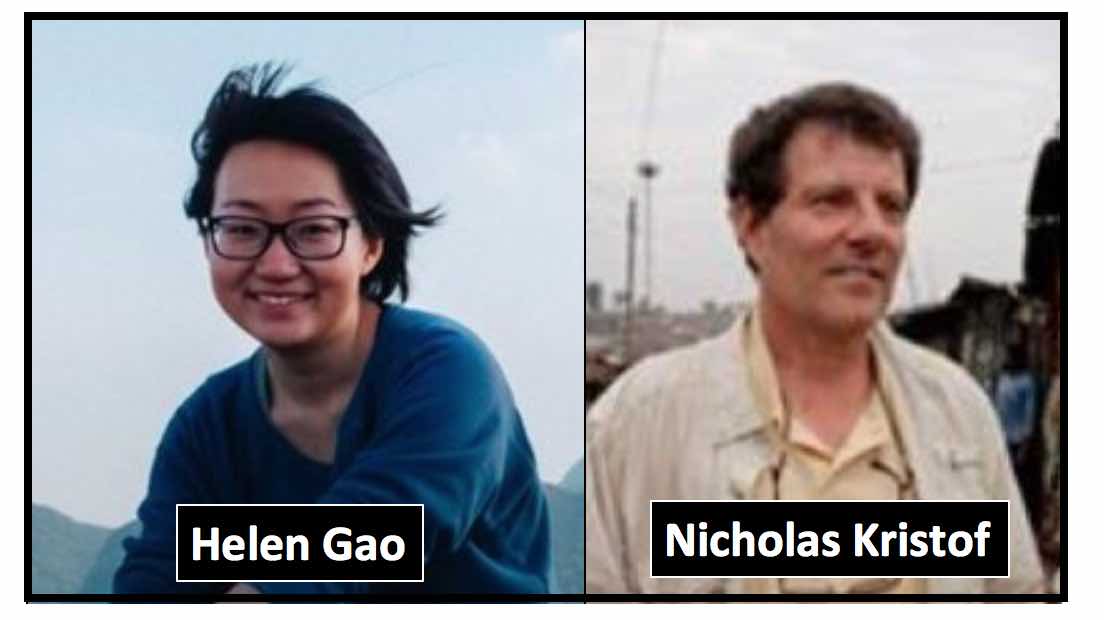 How Did Women Fare in China’s Communist Revolution?

... “The Communists did many terrible things,” my grandmother always says at the end of her reminiscences. “But they made women’s lives much better.”

That often-repeated dictum sums up the popular perception of Mao Zedong’s legacy regarding women in China. As every Chinese schoolchild learns in history class, the Communists rescued peasant daughters from urban brothels and ushered cloistered wives into factories, liberating them from the oppression of Confucian patriarchy and imperialist threat.

But the narrative of an across-the-board elevation of women’s status under Mao contains crucial caveats.

While the Communist revolution brought women more job opportunities, it also made their interests subordinate to collective goals.

That's how it always is, Helen. That is the essence of communism; do what you're told, and tell everyone you're happy — or else.

What's really offensive is how each author handled Mao's "Great Leap Forward" of 1958-1961. In unexcerpted text, Kristof's 2005 book review spent 140 tedious words questioning the authors' estimate that 38 million people died. Gosh, he said, other estimates say it was "only" 30 million, or even 23 million. Well Nick, in 2010, Frank Dikötter, a Hong Kong-based historian who at the time was "the only author to have delved into the Chinese archives since they were reopened" in 2006, reported the following, as carried in the UK Independent:

At least 45 million people were worked, starved or beaten to death in China over these four years; the worldwide death toll of the Second World War was 55 million.

So the body count claimed by the authors of Mao: The Unknown Story turns out to have really been a mid-point.

Gao basically acts as if the Great Leap Forward never happened (the term never appears), and instead guardedly praises "collectivization":

When historians researched the collectivization of the Chinese countryside in the 1950s, an event believed to have empowered rural women by offering them employment, they discovered a complicated picture. While women indeed contributed enormously to collective farming, they rarely rose to positions of responsibility; they remained outsiders in communes organized around their husbands’ family and village relationships. Studies also showed that women routinely performed physically demanding jobs but earned less than men, since the lighter, most valued tasks involving large animals or machinery were usually reserved for men.

The only really "complicated" thing here, as discussed already, is getting one's arms around an accurate death toll.

Both Kristof in 2005 and Gao in 2017 had nothing to say about the disproportionate number of pre-born baby girls killed in the womb as a result of China's one-child policy. That policy went into effect in 1979, three years after Mao's death, and was only slightly loosened to become a two-child policy effective in 2016. An item seen that year at Time.com, of all places, reported that:

One international population journal dubbed the one-child policy even more devastating to China than the 1966-76 Cultural Revolution or a manmade famine that killed millions from 1959-1961.

So if one properly blames China's one-child policy on totalitarian communism, the death toll in that country easily tops 100 million. "Red (with victims' blood) Century" indeed.

Finally, both Kristof and Gao act as if China's totalitarian policies were necessary evils which resulted in that nation becoming an economic power. That's utter nonsense. In fact, Gao, after describing how "emancipated" women really weren't all that emancipated for several paragraphs, wraps up her piece by writing:

For all its flaws, the Communist revolution taught Chinese women to dream big. When it came to advice for my mother, my grandmother applauded her daughter’s decision to go to graduate school and urged her to find a husband who would be supportive of her career. She still seems to think that the new market economy — with its meritocracy and freedom of choice — will finally allow women to be masters of their minds and actions.

After all, she has always said to my mother, “you have more opportunities.”

The country's partial adoption of a "market economy," aka capitalism — all of which occurred after Mao's death — is why those "opportunities" exist. (Deng Tsaio Peng, not Mao, was the country's economic architect.) The problem is still that the Chinese surveillance state (with disgraceful technical assistance from US tech companies going back to 2005) can still take them all away, individually or collectively, in the blink of an eye.

The one good thing we can say about the "Red Century" series at the New York Times is that there has perhaps never been a more comprehensive collection of useful idiocy all in one place.