The reception given to Sally Quinn's new book, Finding Magic, has been strangely quiet.

Perhaps that's because the book shamelessly reveals that since 1973, if not earlier, Quinn, who was the nation's capital's de facto social gatekeeper for several decades, deceived the world about the true nature of her "religious" outlook, and did so with the help of the rest of the Washington press corps — that is, if one considers belief in the occult, practicing voodoo, and supposedly communicating with ghosts (sound familiar?) the foundations of a "religion."

Quinn, now 76, was married to Washington Post editor Ben Bradlee for 36 years until he died in October 2014. She spent most of her journalism career as a reporter for the paper's style section. From that perch, as one might expect, she dove into topics relating to the political conduct and personal lives of the Washington elites. With the exception of being part of the liberal-Democratic "tsk-tsk" late-1990s crowd which scolded President Bill Clinton for his serial sexual misconduct for public consumption but couldn't see why anyone would dare to want to remove him from office for demonstrated perjury and obstruction of justice, Quinn generally went after Republicans and conservatives with far greater gusto and venom.

In 2010, she changed roles, becoming the founding editor of the Post's OnFaith blog. Her last OnFaith post was in October 2015.

Though Quinn's book was officially released last Tuesday, Michelle Cottle at The Washingtonian published a lengthy August 27 "fresh start" item that one has to believe was meant to come off as a "next act" puff piece. Instead, to just about any reasoned observer, Quinn came off as Puff the Magic and Murderously Spiteful Dragon Queen, who believes that she successfully put hexes on three people who died (bolds are mine throughout this post):

... It’s a spiritual memoir, called Finding Magic, that ... outs herself as a believer in the occult and as an erstwhile practitioner of voodoo, and she packs the book with moments that have made anxious friends wonder: Are you sure you want to share that?

... (in the 1970s, 1980s, and 1990s) From her perch atop the establishment, Quinn positioned herself as public arbiter of the town’s social mores. She began dispensing advice to incoming Presidents and other luminaries about how to get along with the natives. When someone violated establishment norms—or snubbed her invitations—she was quick to scold, often in acutely personal terms. Her flogging of President Clinton for “fouling the nest” with Monica Lewinsky remains the stuff of local legend. 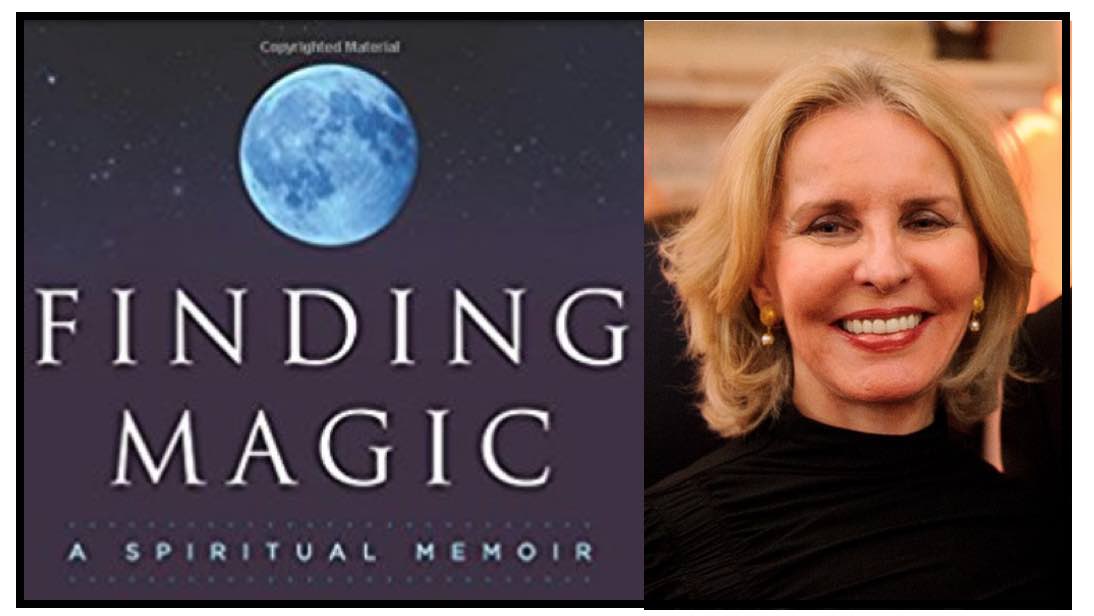 ... this book is Quinn’s coming-out as an ardent believer in the supernatural. For the long­est time, she declares, “I had been afraid to discuss my occultism for fear people would think I was crazy, and then I was reluctant to discuss my blossoming faith for fear my friends would think I had gone over the edge.” But now Quinn is going all in. She recounts numerous moments that she sees as brushes with the divine—moments as prosaic as noticing the splendor of a pine tree and as psychedelic as, while yachting as a teenager, experiencing “flash-forwards” in which “[m]y whole emotional future passed before me.”

... Quinn has consulted psychics for years and, until recently, would conduct readings herself for family and friends. “When I first met Sally and Ben, it was right after Watergate,” recalls ABC News correspondent Martha Raddatz, who was once married to Quinn’s stepson Ben Bradlee Jr. “She took out the tarot cards, and I was like, ‘What the heck is she talking about?’”

... Ouija boards, astrological charts, palm reading, talismans—Quinn embraces it all. And yes, she has been in contact with her husband since his passing. Through a medium. Repeatedly.

... She reveals that, in her less mellow days, she put hexes on three people who promptly wound up having their lives ruined, or ended.

The first, cast in 1969, was spurred by old-fashioned jealousy. Some exotic beauty at a Halloween party inspired lust in Quinn’s beau at the time—and then killed herself just days after Sally cast her spell.

Her second victim was Clay Felker, the longtime editor of New York magazine who oversaw a brutal profile of Quinn in 1973, just before her catastrophic debut on the CBS Morning News. Quinn hexed Felker not long after flaming out at CBS and returning to Washington. “Some time afterward, Rupert Murdoch bought New York magazine in a hostile takeover, and Felker was out,” she writes. “Clay never recovered professionally. Worse, he got cancer, which ultimately caused his death.”

Now and again, Quinn stresses that she doesn’t take her psychic abilities too seriously. ...

But the denials ring hollow. The book is awash in tales of Quinn’s occult prowess—she wants people to take this seriously, or at least to believe she takes this seriously. At the very least, she scared herself so badly when her third curse hit its mark—prompting a panic that her previous hexes had been karmically responsible for her son’s illness—that she vowed never to dabble in the dark arts again. Period.

Which is probably for the best in these overheated political times. “You can’t imagine the number of people who have asked me to put a hex on Donald Trump—I mean, I have got friends lined up,” she says. “This is my biggest restraint now.”

The bolded sentence in the final excerpted paragraph is very telling. It reveals that Quinn's occultism was an open Beltway secret for over four decades which no reporter in the media echo chamber had the courage to share with the public this crowd of alleged journalists piously claims to serve.

Does it matter? Absolutely. As Michael W. Chapman at CNS News observed on September 13, "The liberal media and Washington insiders, incidentally, mocked Nancy Reagan for consulting an astrologer." One of those engaging in bitter criticism and mockery was Sally Quinn herself.

I would suggest that the world would have seen a scathing column Quinn wrote when former First Lady Nancy Reagan released her memoir in 1989 in quite a different light if they had known the truth about Ben Bradlee's wife. Quinn, who was an occultist for at least two decades at that point (based on her first hex taking place in 1969, as seen above), went after Mrs. Reagan with a vengeance (paragraph breaks added by me, as there are no breaks in the currently posted online version of the original article):

... Her greatest accomplishment, according to her, is changing her husband's mind about Gorbachev and the evil empire. Right on, Nancy!

But wait. Whose ideas were these, anyway? Nancy's or her astrologers', including Joan Quigley? (According to sources close to the Reagans, both of them consulted astrologers long before they came to the White House.) Who was really running the country, anyway? Nancy claims that she only started consulting Quigley after her husband was shot and says it was a crutch, her way of coping. But she also claims she only talked to her once or twice a month.

Quigley has said that she spoke with Mrs. Reagan two or three times a day, and CBS reports that she had Quigley on a $3,000-a-month retainer. (Think of all the clothes she could have bought with that. At least one and a half Galanos dresses!)

Quigley claims that it was her advice to Nancy about Gorbachev's chart that persuaded Ronald Reagan to initiate a closer relationship with the Russians.

I happen to have an interest in astrology, but if Quigley is telling the truth, Nancy Reagan's dependency, and ultimately the president's, is frightening and shocking. No less so than if the wife of the president was totally dependent on the political advice of a priest.

Quinn, like so many other reporters who were or still are at the Post, was a fan of citing unnamed "sources." Ronald Reagan himself insisted that "no policy or decision in my mind has ever been influenced by astrology."

As to what's really "frightening and shocking," I'd place a closeted practitioner of occultism who believes in murderous hexes pretending to be offended by astrology to score cheap political points against the First Lady of a wildly successful two-term presidential administration several "frightening and shocking" notches above a protective First Lady who allegedly consulted the stars and had "a role" in Ronald Reagan's "scheduling."

On Saturday, John Nolte at Breitbart skewered Quinn's pretentiousness and deception while she was at the Post's OnFaith blog (links are in original; italics are Nolte's):

... This demonic woman was/is a high-profile religion writer for the Washington Post, everyone in D.C. knew this, and no one thought the readers should.

Gee, I wonder why?

Without being required to reveal her true self, the Washington Post allowed Quinn to blast Christians like Sarah Palin and write about “A Catholic ‘war on women'” and “Chick-Fil-A day: Don’t boycott. Infiltrate” and “Mitt Romney’s God problem” and “Will the Catholic Church become its own relic?”

The only good news is that Quinn is not a very good or persuasive writer. Everything she argues has the stench of a dilettante, a socialite with Big Thinks who is allowed to share them through a newspaper obligated to pander to the boss’s wife.

Nevertheless, a good faith perusal of Quinn’s religious columns reveals a forked serpent’s tongue, or in today’s parlance, a concern troll. Quinn frequently singles out Christianity and, with only the very best of intentions — because, you know, she wants to see it succeed, urges Christians and the Christian church to stop being Christian ...

In a Wednesday Time.com Q&A with Elizabeth Dias, Quinn admitted that she is not out of the hexing business:

A. Thirty-five years ago was the last time I did one. But trust me, all my friends who think it is ridiculous, in the last year, they have begged me to use my powers of hexing.

A. On someone who shall be nameless. It comes back at you threefold, and I don't want to go there. I only do good hexes now.

Somehow, it's hard to imagine that Sally Quinn's definition of "good" is the same as that of genuinely religious Judeo-Christian practitioners.

It's understandable, given how this book effectively shames members of the Washington press corps irrevocably for the history books for a disgraceful four-plus decade coverup.