Here are the key climate-related excerpts from Stephens' column (links are in original; bolds are mine):

Last October, the Pew Research Center published a survey on the politics of climate change. Among its findings: Just 36 percent of Americans care “a great deal” about the subject. Despite 30 years of efforts by scientists, politicians and activists to raise the alarm, nearly two-thirds of Americans are either indifferent to or only somewhat bothered by the prospect of planetary calamity. 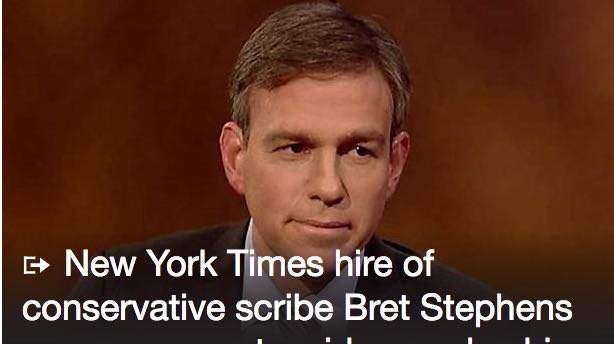 Why? The science is settled. The threat is clear. Isn’t this one instance, at least, where 100 percent of the truth resides on one side of the argument?

Well, not entirely. As Andrew Revkin wrote last year about his storied career as an environmental reporter at The Times, “I saw a widening gap between what scientists had been learning about global warming and what advocates were claiming as they pushed ever harder to pass climate legislation.” The science was generally scrupulous. The boosters who claimed its authority weren’t.

... while the modest (0.85 degrees Celsius, or about 1.5 degrees Fahrenheit) warming of the Northern Hemisphere since 1880 is indisputable, as is the human influence on that warming, much else that passes as accepted fact is really a matter of probabilities. That’s especially true of the sophisticated but fallible models and simulations by which scientists attempt to peer into the climate future. To say this isn’t to deny science. It’s to acknowledge it honestly.

By now I can almost hear the heads exploding. They shouldn’t, because there’s another lesson here — this one for anyone who wants to advance the cause of good climate policy. As Revkin wisely noted, hyperbole about climate “not only didn’t fit the science at the time but could even be counterproductive if the hope was to engage a distracted public.”

None of this is to deny climate change or the possible severity of its consequences. But ordinary citizens also have a right to be skeptical of an overweening scientism. They know — as all environmentalists should — that history is littered with the human wreckage of scientific errors married to political power.

Given all of the known examples of data-fiddling and the previously undisclosed doubts exposed in the Climategate emails in 2009, Stephens, the alleged "conservative," gave far too much credit to the supposedly "scrupulous" science.

Stephens also should know better than to believe that people like Al Gore who want the world to spend $15 trillion — yes, trillion — to prevent "global warming" are genuinely interested in persuading anyone except the elites who hold political power. They instead want to intimidate anyone and everyone who might consider offering up civil disagreement into acquiescent silence.

Even an appeal to recognized authority (in Stephens' questionable opinion) like former Times writer Revkin couldn't save the columnist — or the Times — from the intense and often profane wrath of journalists, many of whom, if they had the power, would clearly relish the opportunity to cooperate in censoring any and all climate-change skepticism. Some examples (HT Twitchy; profanity cleansed but still recognizable):

The idea that the Times actually promoted Stephens' first column by treating it as a "top story" to generate clicks also got a great deal of pushback.

Apparently, there are no longer any negative consequences in the "profession" of journalism for public statements which would threaten the careers of people who work in genuine professions.

The only thing that may be driving the left-dominated establishment press more crazy than any expressions of climate-change skepticism, no matter how mild (as Stephens' critique certainly was) is the idea that the public, after almost 100 days of virtually nonstop media attacks, trusts President Donald Trump more than it trusts journalists.

Gee, I wonder why?