In a dispatch accusing the Trump administration of hypocrisy in expressing pleasure over Friday's jobs report from the government's Bureau of Labor Statistics, Associated Press reporters Jill Colvin and Christopher Rugaber, with additional assistance from Jonathan Lemire, either betrayed an amazing collective level of ignorance about what a households is, or were so blinded by the need to criticize Donald Trump that they didn't see how ridiculous they made themselves and their wire service look. The trio's error, shared by their editors if such people even exist any more, is so obvious that one simply has to believe that it's the latter.

The trio's primary purpose was to go after Trump Press Secretary Sean Spicer for his tweeted and Friday Press Briefing statements that the administration is pleased that "the economy added 235,000 new jobs and the unemployment rate ticked down to 4.7 percent." In his briefing, 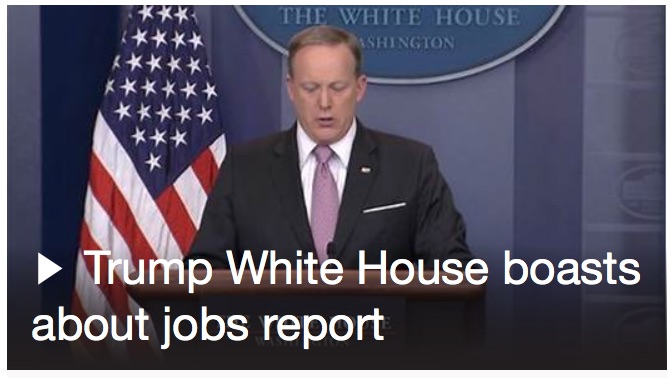 Spicer went further, and stated that "I talked to the president prior to this, and he said to quote him very clearly: 'They may have been phony in the past, but it's very real now.'"

Before getting to that, readers need to try to absorb that fact that three allegedly well-educated journalists (Colvin — Columbia; Rugaber — American University; and Lemire — Columbia) shared involvement in a story containing the following appalling and absurd paragraph, written to remind readers of where Trump stood on the credibility of the officially unemployment rate during the presidential campaign:

During a speech at the Detroit Economic club last year, Trump pointed to figures that show one in five American households do not have a single member in the labor force. He failed to mention the one in five includes children, young people in school and senior citizens who are retired.

Memo to Colvin, Rugaber and Lemire: The presence or absence of children in a given household doesn't affect the "one in five" statistic Trump cited — unless you believe that there are millions and millions of households out there headed by and consisting only of "children." (The "senior citizens" element of the sentence is valid, but based on the rest of the sentence, one is inclined to believe that this accuracy was the result of pure luck.)

At the time this post was drafted early Saturday evening, the AP trio's misguided critique had been present for over 24 hours. Apparently, at least at that point, no one at the wire service had a problem with the continued presence of an eye-popping statement.

Trump's apparent belief in the jobs numbers as relayed by his press secretary may be defensible, despite his campaign rhetoric.

Groshen's appointment was delayed for 11 months before she was confirmed in January 2013, likely because of Republican senators' and others' concerns over appointing a far-left partisan with "ties to decidedly left-wing political groups" into a technical position with the potential to spin or even alter underlying data.

During Groshen's reign, as the reported unemployment rate dropped from 8.0 percent to 4.8 percent during her term, there was reason to believe that BLS may have changed its criteria for whether a person was in the labor force and began excluding more people who were legitimately looking for work. Doing so in a manner inconsistent with previous practices would artificially reduce the officially reported unemployment rate.

Groshen has been gone for six weeks. With new leadership, it's at least possible that Team Trump has gained confidence in the BLS data, and has had the opportunity to correct any major flaws which the previous director might have allowed into its processes.

This thought appears not to have even occurred to our crack AP reporters. Why would we expect it to, when their determination to criticize Donald Trump led them to completely misunderstand something as basic as what a household is to make a false point?