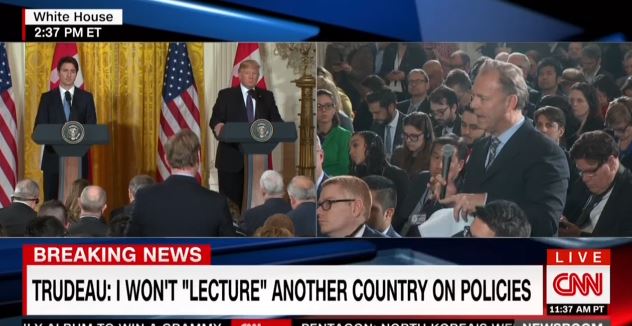 One of the more amusing yet pathetic spectacles of the Trump administration’s early weeks — the ongoing establishment press fury at the richly deserved lack of respect it is getting from the President and his press secretary — neared meltdown yesterday. This occurred because Donald Trump wasn't asked a question everyone knew he wouldn't answer if asked about Michael Flynn at a joint press conference with Canadian Prime Minister Justin Trudeau.

On Monday, Scott Whitlock at NewsBusters covered the joint temper tantrum/pity party at MSNBC in which Brian Williams — that's right, "Mr. Made-Up Stories" himself — and Katy Tur engaged. CNN, CNN.com, the Washington Post, the New York Times, the Associated Press and others joined the roster of not so fine whiners.

Continuing a habit of calling on reporters other than those in the traditional White House press corps, Trump yesterday took questions from Scott Thuman, a reporter at DC's Sinclair Broadcasting-owned ABC affiliate, and Kaitlan Collins at the Daily Caller. They asked pertinent, newsworthy questions. Neither asked about Flynn.

The establishment press's fury, accompanied by a sense of helplessness from which many readers who have had to endure decades of leftist bias will get guilty pleasure, is palpable.

In a CNN video carried at the Daily Caller, CNN's Wolf Blitzer blustered: "People are going to be saying, ‘well those are the questions that the White House, those are the questioners the white house decided to call on for this moment.'" Thuman and Collins have each said that they were not told what questions to ask or not ask. Gloria Borger complained about "a clear strategy of the White House to downgrade the influence of the so-called mainstream media."

Dylan Byers at Money.CNN.com went further (bolds are mine):

Somehow, President Donald Trump made it through yet another press conference with a visiting foreign leader without having to field any questions about the controversy surrounding National Security Advisor Michael Flynn.

In a joint appearance with Canadian Prime Minister Justin Trudeau on Monday, Trump took just two questions from U.S. reporters -- one from the conservative Daily Caller and the other from a D.C. television station owned by Sinclair Broadcast Group, both of which are widely viewed as favorable to Trump. None of the questions pertained to Flynn, whose job security is a matter of much public speculation.

Reporters and media personalities expressed outrage on Twitter, and accused the White House of foul play ...

... At least one reporter tried to ask the president about Flynn but was ignored, according to his own account: "For the record - I asked the President if he still has confidence in General Flynn," ABC's Jonathan Karl tweeted. "He sure seemed to hear the question but did not answer."

... "Reporters covering the White House who fail to ask the president about the most pressing news of the day should be ashamed of themselves," The Washington Post's Glenn Kessler tweeted.

At its blog The Fix, Washington Post reporter Callum Borchers posted a series of tweets from reporters at Time, CBS News and elsewhere expressing outrage that there was no question about Flynn. He also noted that the establishment reporters directed some of their post-press conference fury directly at Collins and Thuman. How classy.

The Associated Press's TV critic David Bauder also piled on, but garnered a response from Collins which nailed the essence of the problem with Washington's hive journalism: "Personnel questions are interesting, but our readers want substance. They don't want Washington bull----."

Both Jonathan Karl's phony tactic — he knew that Trump wasn't taking unsolicited questions, but shouted one anyway — and Kessler's "our priorities are the only priorities" tweet betrayed what Collins correctly characterized as the establishment press's "bull___" definition of "news."

The people Borger calls the "so-called mainstream media" knew darned well that Trump didn’t want to comment on the Flynn situation. Trump knew that they wanted to be able to write the “he wouldn’t confirm or deny” blah-blah garbage that they believe constitutes “news” in their fevered minds.

That isn't "news"; it's invented, uninformative scripting disguised as news. It's the kind of tired, pretend "reporting" that informed news consumers are so sick and tired of having to endure. In case Flynn resigned, which he did, the press badly to be able push the idea that they created the pressure that caused him to leave. That's nonsense.

Trump minimized the chances that his enemies would play that game. Instead, he selected genuine reporters, i.e., not Democratic Party operatives and enemies of his administration pretending to be reporters, who were less likely to go down that inane establishment path.

Clearly, the leftist press hasn't gotten the message, though it has been in front of their faces since November 8, and has become even more evident since January 20.

That message, briefly stated, is that the establishment press established itself as Trump's declared and implacable enemies during his presidential campaign. They have done nothing since his general-election victory to change their posture, yet they expect things to return to how they once were.

In case they need to be reminded of the details, here they are:

The amazing part of this is that anyone would expect any reasonable person to treat people who worked so deceitfully and unethically to defeat them — and who continue to work to thwart their agenda, not to merely report on it — any differently.

Based on yesterday outbursts, the forecast appears to call for four more years of establishment press crocodile tears.

Finally, as the folks at Twitchy pointed out, the Obama administration had a habit of calling on reporters likely to be friendly — which was much easier, because almost every reporter in the room was enamored of Barack Obama:

This newfound outrage over Trump playing by Obama’s rules just rings hollow — and shines an even bigger spotlight on liberal hypocrisy.