For example, the Associated Press, in a very late paragraph in just one of its three reports on the topic Thursday, admitted that "Though the FBI and Homeland Security Department issued a joint report on 'Russian malicious cyber activity' - replete with examples of malware code used by the Russians - it still has not released a broader report Obama has promised detailing Russia's efforts to interfere with U.S. elections." In other words, there is no — zero, zilch, nada — published evidence, let alone proof, other than the statements of anonymous Obama apparatchiks on a conference call, that Russia successfully "interfere(d) with U.S. elections." But that hasn't stopped AP or others from taking it as gospel that Russia "hacked the elections."

This represents the completion of a what appears to have been a coordinated, deliberate effort to recast what has up until this point described as "attempted interference" as a more nefarious and definite-sounding "hacking."

But by definition, a "hack" is a successful "breaking into a network, computer, file, etc.,usually with malicious intent." No one has demonstrated that the Russians accomplished any successful intrusions, let alone successful ones directly interfering with the voting process, which would alone would qualify as "hacking the elections."

Yet that's clearly what headline after headline and story after story want readers to believe.

In the process of presenting their related Thursday evening dispatch, the AP's Josh Lederman and Tami Abdollah also joined most of the rest of the press in crossing over to the dark side in regards to how WikiLeaks obtained information from the computers of the Democratic National Committee and John Podesta. Their story's headline reflects that shift, taking it as accepted fact — when it absolutely isn't — that Russia was involved in "hacking the presidential campaign."

The recipients of the information passed on to WikiLeaks insist that they did not get the information from the Russian government, and that their source was "not Russian."

They further insist that they did not get their information as a result of someone else's hacking, but instead received it from inside sources who purloined the information and then leaked it. Specifically, via one of WikiLeaks' leading spokespersons:

I can tell you with 100% certainty that it is not any Russian state actor or proxy that gave the Democratic National Committee and Podesta material to WikiLeaks. The claim is nonsense. Journalists are also publishing that these were obtained by “hacking” with no evidence that this was the method used to obtain them.

The only good thing that can be said about the AP reporting pair's content is its de facto admission that only the U.S. government controlled by President Barack Obama claims to have evidence — and hasn't genuinely presented it — that Russia "tried to sway" the election results by "hacking" them:

The United States struck back Thursday at Russia for hacking the U.S. presidential campaign with a sweeping set of punishments targeting Russia's spy agencies and diplomats. The U.S. said Russia must bear costs for its actions, but Moscow called the Obama administration "losers" and threatened retaliation.

A month after an election the U.S. says Russia tried to sway for Donald Trump (it's been 51 days, which according to my calculator is a lot closer to two months — Ed.), President Barack Obama sanctioned the GRU and FSB, leading Russian intelligence agencies the U.S. said were involved. Those sanctions could easily be pulled back by Trump, who has insisted that Obama and Democrats are merely attempting to delegitimize his election.

In an elaborately coordinated response by at least five federal agencies, the Obama administration also sought to expose Russia's cyber tactics with a detailed technical report and hinted it might still launch a covert counterattack.

... It was the strongest action the Obama administration has taken to date to retaliate for a cyberattack, and more comprehensive than last year's sanctions on North Korea after it hacked Sony Pictures Entertainment. The new penalties add to existing U.S. sanctions over Russia's actions in Ukraine, which have impaired Russia's economy but had limited impact on President Vladimir Putin's behavior.

Note the reference only to generalized "tactics," and not specific "actions."

In terms of "hacking the elections," the AP pair let anonymous Obama administration apparatchiks make that assertion. But given that it's not in quote marks, it will fairly be seen by many that the reporters share the assessment of the group of people making it:

Indeed, senior Obama administration officials said that even with the penalties, the U.S. had reason to believe Russia would keep hacking other nations' elections and might well try to hack American elections again in 2018 or 2020. The officials briefed reporters on a conference call on condition of anonymity.

Though the FBI and Homeland Security Department issued a joint report on "Russian malicious cyber activity" - replete with examples of malware code used by the Russians - it still has not released a broader report Obama has promised detailing Russia's efforts to interfere with U.S. elections.

As written, the reporters have accepted as a settled fact the inferred contention that Russia "hacked the elections" in 2016; otherwise, they wouldn't be doing so "again" in 2018 and beyond.

Critically, it appears that the AP had to violate its "News Values and Principles" to publish Lederman's and Abdollah's dispatch.

Just because more than one anonymous official is on a conference call doesn't mean that the AP has achieved its stated desire not to report contentions unless they can confirm them with another source. The wire service's "News Values and Principles" state that "The AP routinely seeks and requires more than one source." A bunch of anonymous people who work together echoing the same talking points on a conference call is one "source." From all appearances, the AP and the rest of the press do not have another source with direct knowledge who can claim with any credibility that "Russia hacked the elections." (The AP did consult "a cybersecurity lawyer and former National Security Agency and Homeland Security Department official" who accepted the government's story, but that person by definition doesn't have direct knowledge — unless he wants to admit to violating national security laws.) 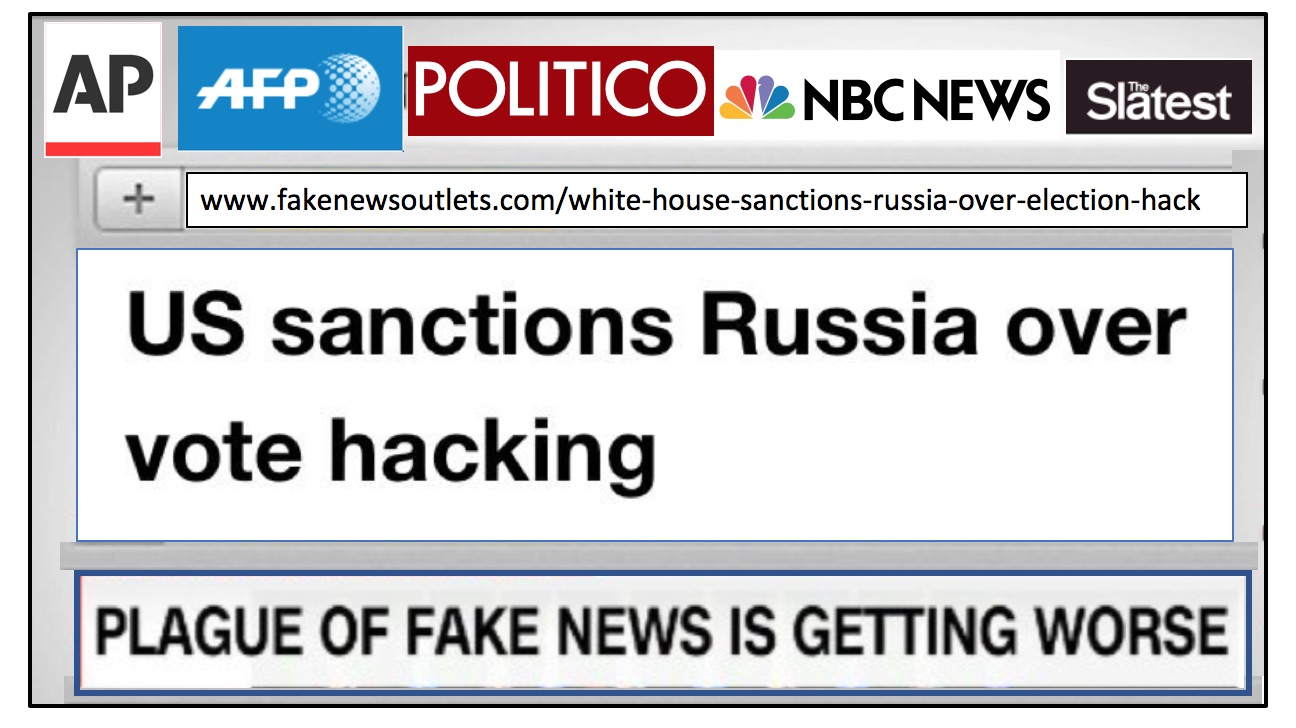 Regardless, using the fig leaf of the FBI report identified earlier — which demonstrates absolutely nothing, as seen in the analysis here — the establishment press propaganda mill has cranked into overdrive.

Here is just a small sample of outlets pushing the "Russians hacked the elections" meme:

So here's the question. Who are the more prolific purveyors of "fake news" — Guys with obscure websites who manage to gain fleeting social media attention, or the dominant establishment press which takes it on faith without genuine proof that "Russia hacked the elections"? I'd say it's no contest.