New York Times: Now That Trump Is Ahead in 'Older, Whiter, Less Educated' Ohio, It 'Is Fading on the Electoral Map'

On Thursday, in a story which made the front page of Friday's print edition, Jonathan Martin at The New York Times reported that Democratic nominee Hillary Clinton is "effectively acknowledging how difficult they think it will be to defeat Donald J. Trump" in Ohio.

But it's all good, says Martin, because the Buckeye State, which no victorious presidential candidate has lost since 1960, is now "fading in importance." Why? Because "Ohio has not fallen into step with the demographic changes transforming the United States," in that is it "older, whiter and less educated than the nation at large." Reviewing previous Times coverage, it seems that Ohio's supposed lesser importance magically came about in the past four weeks.

Imagine that — Both candidates spent their day in Ohio, and Parker emphasized the Buckeye State's importance:

Hillary Clinton and Donald J. Trump ran virtually parallel campaigns on Monday as they geared up for the final stretch of the presidential race. She made nice with the news media by opening up her campaign plane and chatting with reporters. He followed suit, inviting a smaller group of reporters onto his plane and answering questions during the 30-minute flight.

She took along her running mate, and so did he, as both focused on Ohio and nearly crossed paths in Cleveland. Their motorcades all but passed each other, and all four candidates’ planes ended up on the tarmac at Cleveland Hopkins International Airport at the same time.

... Labor Day is traditionally the beginning of a two-month sprint to Election Day, in which candidates try to seize voters’ attention as summer fades and debates loom. Monday was no exception. The visits to Ohio by Mr. Trump and Mrs. Clinton — along with their respective running mates, Gov. Mike Pence of Indiana and Senator Tim Kaine of Virginia — highlighted the importance of a state that Republicans believe Mr. Trump must win to have any shot of reaching the White House.

So both presidential candidates and their running mates were in Ohio on Labor Day in a state "Trump must win." Additionally, Parker missed the fact that Bill Clinton also appeared and gave a speech at Cincinnati's traditional Labor Day AFL-CIO picnic later that day. It seems that Team Clinton also saw Ohio as a state "it must win" four weeks ago.

As I noted at the time, the fact that Mrs. Clinton and her running mate were in supposedly reliably Democratic Cleveland instead of Columbus or Cincinnati appeared to betray worries that "they saw the need to shore up their supposedly reliable but significantly Trump-defecting base" in Northeastern Ohio.

While it appears that Clinton is holding Cleveland and surrounding Cuyahoga County, a significant portion of the rest of Northeastern Ohio, which strongly backed Barack Obama in 2012, is supporting Trump. This would explain why every one of the five most recent statewide presidential polls currently listed at Real Clear Politics has Trump ahead by an average of about four points.

On September 6, the Times attempted to play up the refusal of current two-term Ohio Governor and former presidential rival John Kasich to endorse Trump. Trip Gabriel's headline: "Donald Trump’s Feud With John Kasich May Haunt Him in Ohio." Yeah, that'll finish Trump off in Ohio.

Oops. The Washington Times reported on September 16 that Kasich, having placed his finger in the air to see which way the wind is blowing, mellowed quite a bit, saying that "it’s 'very unlikely' he’s going to be voting for Republican presidential nominee Donald Trump but that he will not be voting for Democratic nominee Hillary Clinton."

Now that things appear to be moving in Trump's favor in Ohio, the Buckeye State suddenly isn't a big deal any more, says the Times's Martin:

Ohio, Long a Bellwether, Is Fading on the Electoral Map

After decades as one of America’s most reliable political bellwethers, an inevitable presidential battleground that closely mirrored the mood and makeup of the country, Ohio is suddenly fading in importance this year. 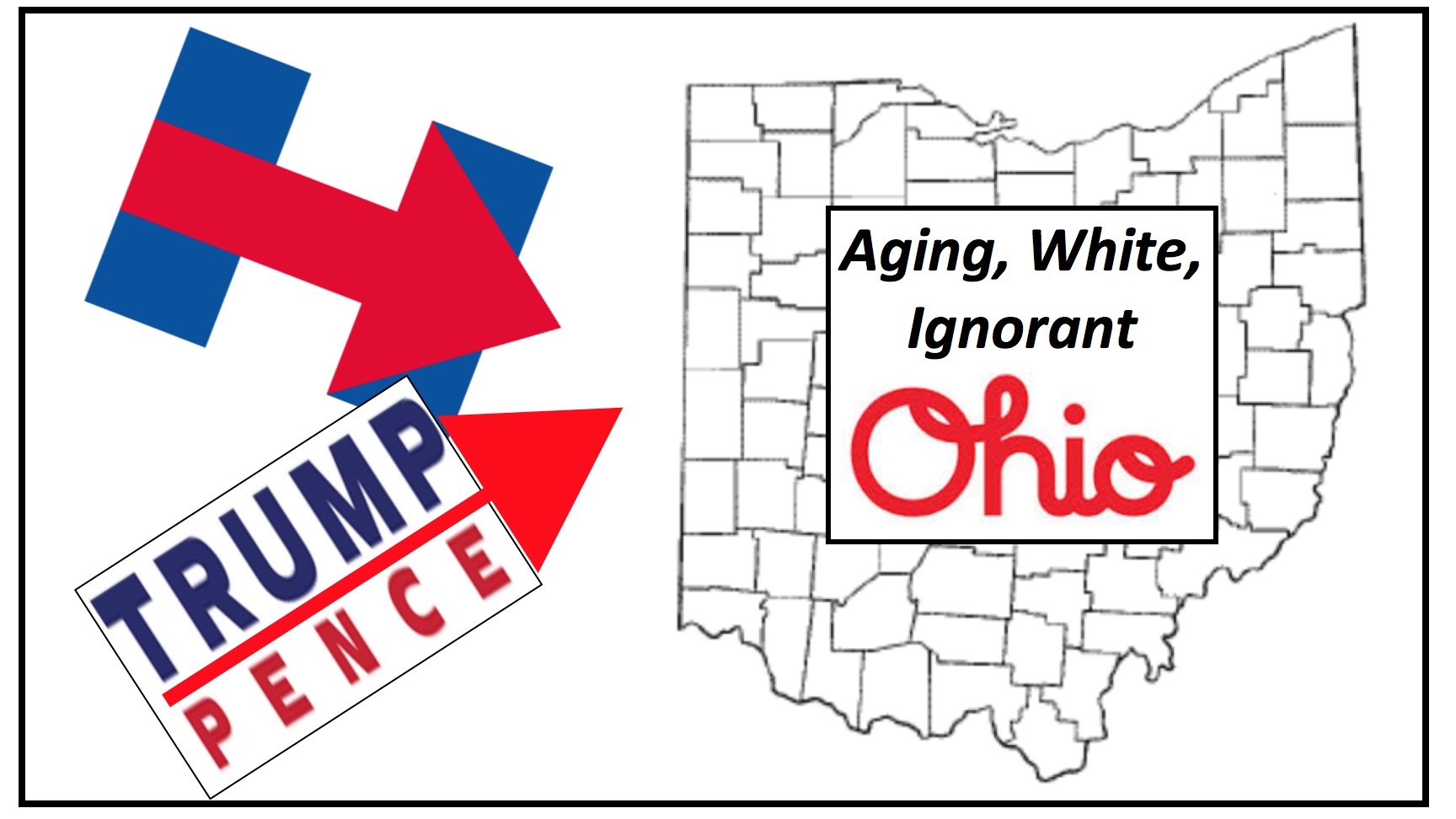 Hillary Clinton has not been to the state since Labor Day, and her aides said Thursday that she would not be back until next week, after a monthlong absence, effectively acknowledging how difficult they think it will be to defeat Donald J. Trump here. Ohio has not fallen into step with the demographic changes transforming the United States, growing older, whiter and less educated than the nation at large.

And the two parties have made strikingly different wagers about how to win the White House in this election: Mr. Trump, the Republican nominee, is relying on a demographic coalition that, while well tailored for Ohio even in the state’s Democratic strongholds, leaves him vulnerable in the more diverse parts of the country where Mrs. Clinton is spending most of her time.

As a Buckeye state resident, I must say that I missed the memo from the authorities telling us we had a duty to "fall in step" with everyone else, and that we'd all be bad people if we didn't. The contempt in Martin's statement is palpable, and extremely offensive.

So because Ohio is supposedly "older, whiter, and less educated" (with a strong implication that the state is therefore measurably more racist than the rest of America), Buckeye State voters aren't important any more.

That's odd, given that Ohio's 18 electoral votes is the same number it had in 2012. It's also odd because Martin completely contradicted himself in later paragraphs. His contradiction is embodied in the bolded items below:

No candidate of either party has won the White House without carrying Ohio since John F. Kennedy in 1960.

But its Rust Belt profile, Mr. Trump’s unyielding anti-trade campaign and Mrs. Clinton’s difficulty energizing Ohio’s young voters have made it a lesser focus for Democrats this year, even as it remains critical to Mr. Trump’s path to the White House. As Mrs. Clinton’s aides privately note, the demographic makeup of Florida, Colorado and North Carolina, which have a greater percentage of educated or nonwhite voters, makes those states more promising for Democrats in a contest in which the electorate is sorted along bright racial and economic lines.

... “If the Republican Party looks more like the Trump coalition and the Democratic Party looks more like the Obama coalition, then the states Democrats must win will no longer be Ohio and Iowa,” said David Wilhelm, a manager of Bill Clinton’s first presidential campaign and a former Democratic national chairman who lives in suburban Columbus. “They will be Virginia, North Carolina, Arizona and Georgia.”

Yet that same Obama coalition was enough to hand the president a two-point victory in Ohio in 2012, when the state’s demographics were no less challenging for Democrats. The difference now, Ohio voters and strategists from both parties say, is in the two candidates and the issues at hand.

Obama won aging, white and ignorant Ohio four years ago, and Hillary Clinton appears to be on track to lose it. Why? Not because Ohio is any older, whiter or more ignorant than it was in 2012 — which Martin admitted in acknowledging that "the state's demographics were no less challenging" — but because of the "candidates" and "the issues."

In other words, Martin has admitted that Hillary Clinton is a weaker candidate, and that Trump, for all of his considerable shortcomings, has a better handle on the issues that matter to Ohioans. We're supposed to believe that this is somehow the case in Ohio but that the Democrats' weak candidate and those same issues unimportant in other key battleground states. Martin spent several additional paragraphs going after Ohioans for believing Trump's "jeremiads about immigrants taking American jobs," and comically tried to smear Trump by comparing him to the late Democrat congressman James Traficant, who was expelled from the House and went to prison for bribery in 2002.

So if this year's differences really don't have anything to do with different demographics, why did Martin and the Times all of a sudden decide that Ohio doesn't matter? The inescapable answer is: Because Mrs. Clinton appears to be losing.

I await with great anticipation the pretzel logic the Times will engage in if Mrs. Clinton continues to lag or sees her lead shrink significantly in the supposedly demographic-friendly states listed above.

The racial and demographic bean counters at the Times clearly don't get it. Trump, even as a wildly unpredictable and often annoying candidate, appears to be holding his own or making inroads into the supposedly impenetrable walls Democrats have built around organized labor and minority group voters, who have so much as been told that they're traitors to their cause and to their race, respectably, if they ever dare to vote for a Republican. It's a development that clearly has shaken up the establishment press.