It would appear that being a Washington Post columnist means never having to say you're sorry — even if you are a member of the paper's editorial board.

Beginning on July 7, the Post's Jonathan Capehart set out to advance the agenda of a group called Freedom for All Americans (FFAA), an outfit which believes it has proven that there is, in Capehart's words, "a 'vast right-wing conspiracy' out to deny" lesbian, gay, bisexual and transgender Americans "their humanity and dignity." In a follow-up column, Capehart commmitted a pathetic error which the paper has failed to appropriately correct.

The dictionary says that a "conspiracy" is "an evil, unlawful, treacherous, or surreptitious plan formulated in secret by two or more persons."

What Capehart and FFAA describe is not a "conspiracy." It is instead a group of like-minded people who aren't hiding anything from anyone attempting to lawfully effect change. If they were pushing leftist or secularist causes, columnists like Capehart would be describing them in glowing terms as "activists" and "community organizers" heroically attempting to change the world. But since the people involved are those who oppose the unilateral, cradle-to-grave imposition of the LGBT worldview and its accompanying attempt to ostracize and dehumanize anyone who dares to oppose them, it's a "vast right-wing conspiracy."

Capehart and FFAA are outraged that these folks are openly trying to make sure that attempts to write legislation protecting those who believe in one-man, woman marriage stand up to judicial scrutiny. Accordingly — the nerve of them! — they have created a template which can be used in multiple states to support that effort (bolds are mine throughout this post):

“We started seeing bills that looked 80 to 90 percent identical in language start to pop up around the country,” (FFAA executive director Matt) McTighe said. “The language was so clearly being coordinated.” In a report to be released on Thursday called “Enemies of Equality,” FFAA shows that 17 bills in 14 states that target transgender Americans “used almost identical language and it’s based off of a model policy ADF started pushing four or five months ago.”

The "conspirators" named in the FFAA flowchart allege that it contains significant factual errors. Apparently annoyed when one definite and obvious error was called to his attention, Capehart committed another even more laughable blunder in a follow-up August 2 column.

The definite original error is the chart's claim that the Alliance Defending Freedom (ADF) funds Liberty Counsel. As ADF's Mat Staver observed in a column recounting the entire episode at Barbwire on August 4:

... the chart is wrong, and so is Capehart. He ignored numerous attempts to contact him. While Liberty Counsel does represent Kim Davis, it is not connected with or receive money from ADF.

In that August 2 column, Capehart got quite snippy (links are in original): 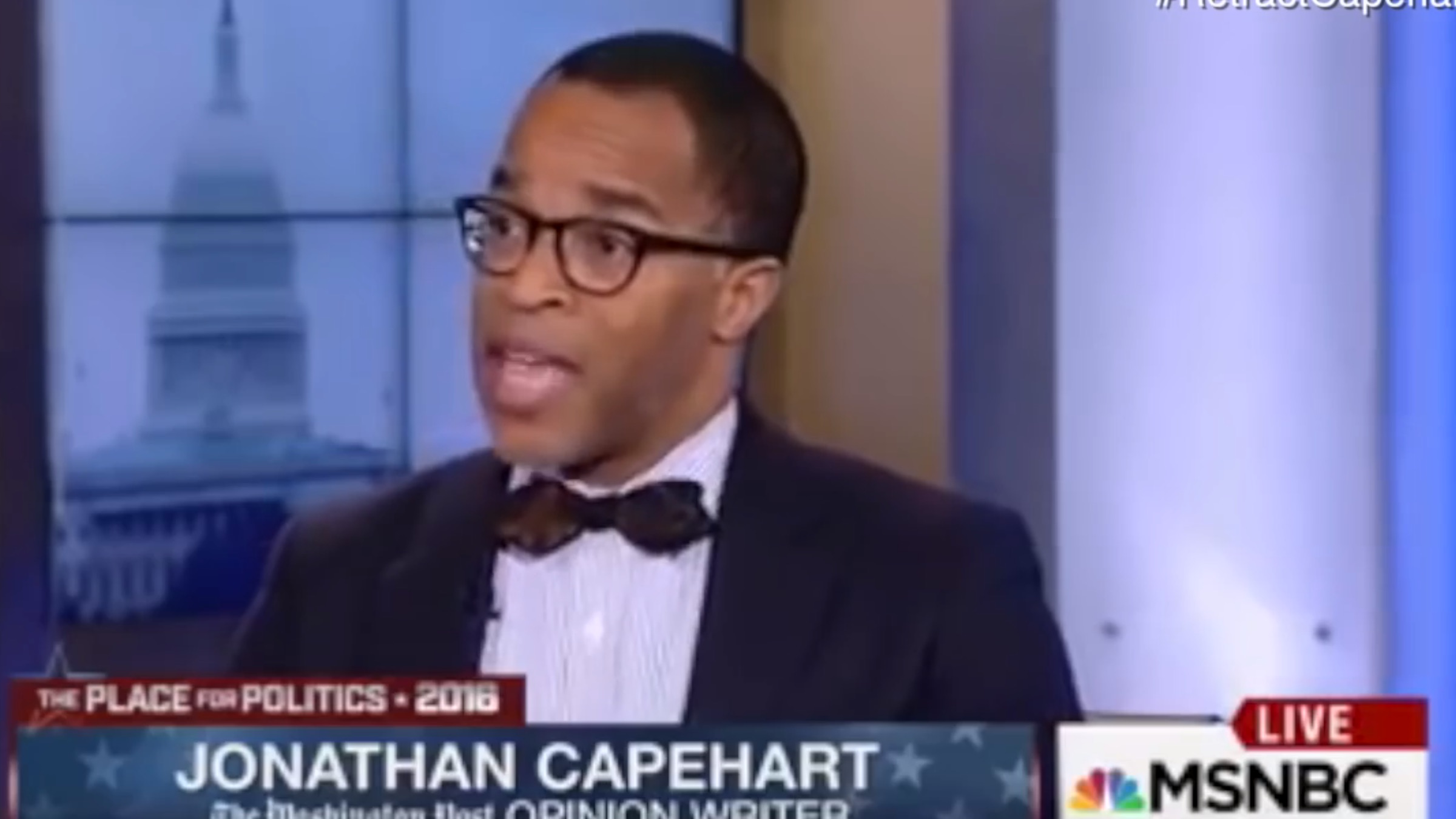 ... "While we represent Kim Davis, Liberty Counsel is not connected to ADF and receives no funds from ADF,” Staver said in a news release that accused me of “shoddy journalism.” Some of his supporters even demanded a correction. I take such requests seriously. And all I can say to Staver and his supporters: Be careful what you wish for.

As Staver observed on August 4:

... now he (Capehart) claims that ADF sent a $10,000 contribution to Liberty University School of Law in 2013, while I was dean of the law school. There’s the connection, he thinks! Apparently, Capehart not only refuses to check his sources, he must also have a hard time reading.

He points to an ADF 2014 990 form, and, sure enough, there is listed Liberty University School of Law. But, if Capehart had read the 990, he would know that this is an obvious mistake. The address listed is Ohio and Liberty University School of Law is in Virginia. That’s not all. The EIN number for the donation is nowhere near the EIN number for the law school or Liberty University. There is an obvious typo because EIN numbers do not begin with 31, as the 990 states. Had he typed the address on the 990 into a search engine, Capehart would have discovered the ADF contribution listed a private address in Ohio, not a law school in Virginia.

... Seemingly obsessed to find a “right wing conspiracy,” Capehart has embarrassed himself. But I want to thank him for these two articles because it is now abundantly clear that Capehart’s shoddy journalism cannot be trusted.

The Washington Post now has the facts. What it does from here will determine whether it wishes to wipe the egg off its face and re-establish some remnant of credibility, or continue to push its leftist tin foil hat conspiracy theories at the expense of objective journalism.

The Post should have pulled Capehart's column. Instead it added the following dissembling language, apparently in response to Staver's Barbwire column which had appeared a few hours earlier:

The Post wouldn't directly admit, as it should have, that "Our guy misunderstood a Form 990 for a different entity and erroneously based his entire column on it." Instead, their "update" makes it appear that Capehart still had some kind of point. He didn't.

The egg is still on the Post's face; now it just has a bit of additional distracting lipstick that changes nothing. Apparently, Post management is fine with letting this stunning failure of journalistic integrity by a member of its own editorial board stand.

Post owner Jeff Bezos is getting robots involved in creating basic news content the paper will report from events at the Rio Olympics. It would be hard to blame him if he chooses to expand this initiative to hard news when one of his paper's leading figures can't get basic facts right, and when his management team won't properly own up to his error.