Though they haven't yet completed covering things up, Hillary Clinton's journalistic defense team at the Associated Press has swung into gear at the Democratic National Convention in Philadelphia.

The headline at the wire service's 10:00 p.m. Monday evening story by reporters Julie Pace and Ken Thomas — "AFTER DISPUTES, DEM STARS TURN THEIR CONVENTION POSITIVE" — falsely told readers that the contentiousness was over. Far from it. The pair's cleanup isn't complete yet (I expect we'll see that by early Tuesday morning), because their early paragraphs still betray the widely-reported disarray which occurred throughout the day. Pace and Thomas also need to work on their hearing, because they're claiming that a chant which became popular at the Republican convention last week relating to Hillary Clinton — "Lock her up!" — hasn't been heard in Philadelphia. They're wrong.

Here are several paragraphs from the AP report (saved here for future reference, fair use and discussion purposes; bolds are mine throughout this post):

Hillary Clinton's campaign joined forces with former primary rival Bernie Sanders and some of his supporters Monday in a scramble to tamp down a fresh burst of party disunity and give an upbeat tone to the opening night of the Democratic convention.

Sanders, one of the night's featured speakers, sent urgent messages to his backers urging them to avoid protests on the convention floor. The Clinton campaign opened up speaking spots for his supporters who touted his accomplishments, and warned that not backing Clinton would only help Republican Donald Trump.

An array of office holders and celebrities hammered home the call for unity, with singer Paul Simon singing his "Bridge Over Troubled Water" as delegates linked arms and swayed to the music.

The headline and those opening paragraphs clearly aren't consistent. But the headline is the only thing many readers will see, especially those who get newsfeeds on their computers, tablets and smartphones. So the deceptive headline clearly serves a useful propagandistic purpose.

(Aside: "Bridge Over Troubled Water" was written by Paul Simon, but his partner Art Garfunkel sang the version people know and love. Simon's vocal performance tonight pales in comparison, and demonstrates that even in Simon's heyday, Garfunkel was better suited to sing it.)

Here's the paragraph which causes me to reoommend that Pace and Thomas visit a hearing doctor:

Trump was a frequent target throughout the night, though the jabs were often more mocking than mean. The tone was a sharp contrast to the Republican convention, where the attacks against Clinton was bitingly personal, including chants of "Lock her up."

So of course we're supposed to believe that the DNC delegates weren't yelling "Lock her up."

But they were, as the Politico reported earlier today: 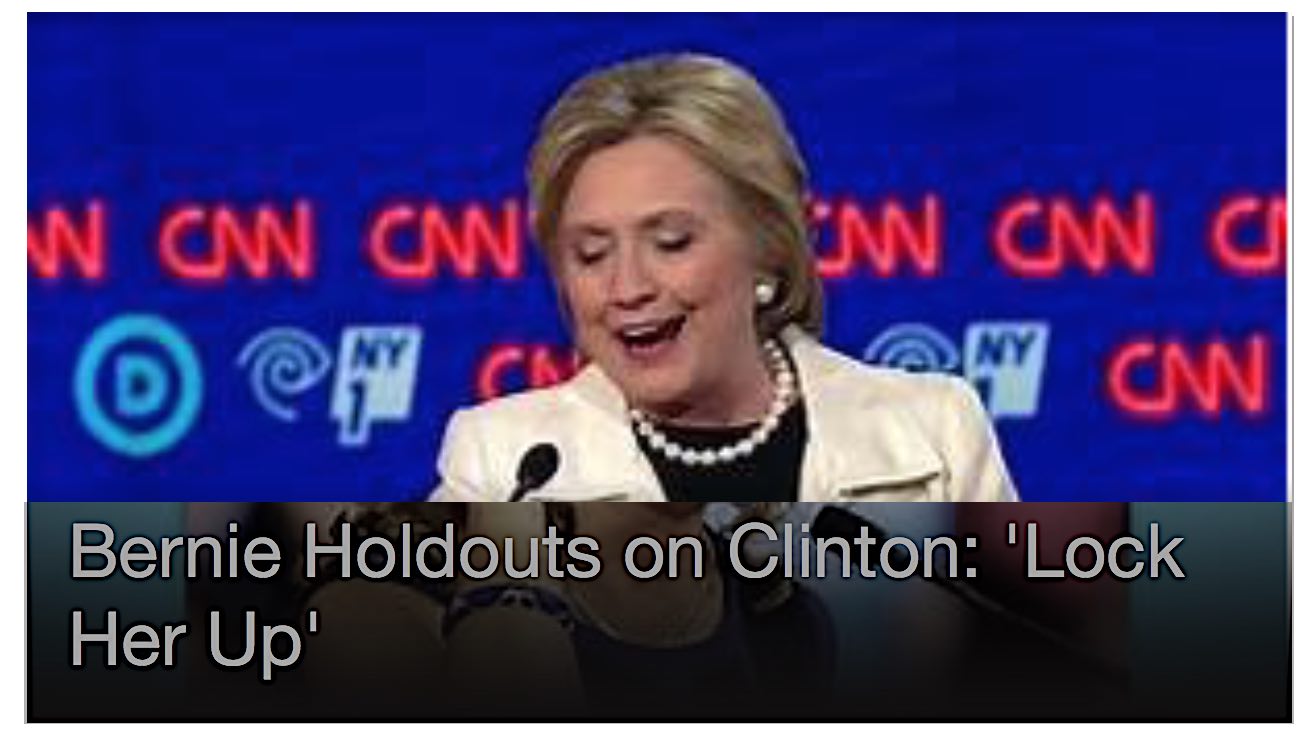 ... Sanders begged delegates to resist the urge to protest, warning that “our credibility as a movement will be damaged” if delegates walk out, turn their backs or boo.

It was the first acknowledgment that an attempt to appease Sanders supporters earlier in the day — the ouster of outgoing DNC chairwoman Debbie Wasserman Schultz from the convention stage — had fallen short. Some Sanders allies, still fuming over leaked emails that showcase the DNC leadership’s favoritism for Clinton, chanted “lock her up” on the convention floor — echoing a Republican rallying cry from last week’s GOP national convention.

... Subsequent speakers were continuously interrupted by pro-Bernie chants — even as they pleaded for unity.

What a disgraceful journalistic deception.

Sadly, it's par for the course, especially for Pace, who in November 2013 reveled on national TV in how her employer hid secret negotiations between Iran and the Obama administration it knew were occurring from the public for eight months.