The establishment press is thrilled over the City of Philadelphia's enactment of a 1.5 cents-per-ounce "soda tax" last week. Monday morning, Mayor Jim Kenney signed the legislation which its City Council passed last week.

Especially unseemly is the virtual euphoria over how so-called "public health" advocates gained their long-sought foothold into using the tax system to dictate personal behavior over (eventually) any and all food and beverage products it doesn't like. Instead of making the "we know better" nanny-state arguments which really form the foundation of their effort, the press is applauding Mayor Kenney for, in the words of New York Times reporter Margot Sanger-Katz, portraying "the soft drink industry as a tantalizing revenue source that could be tapped to fund popular city programs, including universal prekindergarten."

The deception begins with the very title of Bill 161076, the "Sugar-Sweetened Beverage Tax." Despite the title, diet sodas, four of which were in the top ten in soda sales two years ago, as well as many other items, are subject to the tax.

How does the legislation manage this? In true Orwellian fashion, it dictates that the term "sugar-sweetened beverage" also includes "any form of artificial sugar substitute, including stevia, aspartame, sucralose, neotame, acesulfame potassium (Ace-K), saccharin, and advantame."

Some press reports have been taken in by the law's dishonest title, surely giving some Philadelphians the impression that their diet soda consumption is safe from the tax. One particularly awful example, mentioning "sugary drink(s)" and "sugary beverages" in the headline and opening sentence, respectively, is here.

An NBC News story carried at the web site of TV station WLIX headlined "Philadelphia to tax sugary drinks" takes the absurdity to a truly high level, while essentially telling readers that the term "soda tax" isn't even correct:

The sugary drink tax will charge one and a half cents per ounce of regular and diet sodas, iced tea, lemonade, energy drinks and any other juice drinks with added sugar.

Besides deceiving or at the very least seriously under-informing the public about the tax's full scope, the press is also thrilled that the so-called "public-health" lobby's political acolytes may have created a template for success in other locales. The secret? As Natalie Pompilio at the Associated Press described it, it's not to talk about public health:

Democratic Mayor Jim Kenney sold the council on the idea with a plan to spend most of the estimated $90 million in new tax revenue next year to pay for prekindergarten, community schools and recreation centers. 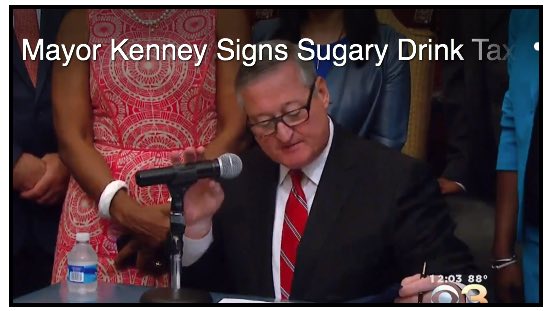 "Thanks to the tireless advocacy of educators, parents, rec center volunteers and so many others, Philadelphia made a historic investment in our neighborhoods and in our education system today," he said.

He said last week that Americans generally reject other people telling them what's healthy for them, so his administration tried to stay away from that. He said any health benefits coming from the tax are a bonus.

Boiled down, Kenney's strategy was to say: "We have a pot of gold we haven't tapped yet, and we can get to it if we stick to saying that 'it's for the children.'"

Of course, that's not how the so-called "public health" lobby sees it. Instead, they see it as, at last, a victory for their supposedly noble cause.

The video currently carried at Sanger-Katz's New York Times story opens with Dr. Kenneth Margulies describing the tax's enactment as a "historic moment for public health." No sir. It is a tragic moment for personal freedom, delivered by people in power who simply will not leave their subjects alone until they live every minute of every day according to their statist "we know better than you" dictates. As would be expected, Michael Bloomberg, who as New York City Mayor tried to foist such a tax on Gotham, and whom Reuters tagged as the person who was responsible for "Bankrolling (the) Philadelphia Soda Tax Win," is thrilled, and is taking his cause to other cities.

As to the economic impact on busineses, here's what Mayor Kenney thinks will happen to efforts to get around the tax, which in percentage terms will usually add at least 25 percent — and often far more — to the cash register price of affected beverages:

"Some people will do it out of anger initially, but I think out of convenience they'll go back to shopping at their corner stores", said Mr. Kenney in an interview.

The "corner store" operators in Berkeley, California, where the nation's first soda tax of 1 cent per ounce was passed in late 2014, would disagree, as an item covering the tax's impact a year after its passage at the San Jose Mercury News makes clear:

The ability of some larger retailers to swallow the extra cost and offer bargain prices gives them a competitive advantage over smaller outlets. Owners of neighborhood convenience and grocery stores complain that, unlike chain stores, they cannot afford to absorb the tax.

"It only hurts the small businesses in Berkeley -- that's what I believe," said Ali Mohammed, a principal at Sacramento Market. "If they need to help the people with the sugar, they should put less sugar in the soda and talk in the school about junk food, about diabetes."

Mohammed and other shopkeepers said many of their customers just buy their sodas in neighboring Albany, Emeryville and Oakland, where there is no soda tax.

Anyone with even an ounce of economic sense — which, by the way, as seen in this tweeted message, at least on this issue, does not include Sanger-Katz at the Times — surely realizes that the larger retailers aren't "swallowing" the extra cost. Instead, they're using attention-grabbing lower prices on affected beverages to lure customers into their stores, and have "the ability" described to put small price increases in place on other items to make up the difference.

So the Berkeley law has given the big players a wedge to drive their annoying little-guy competitors out of business, and a year later, many people are still going elsewhere to buy untaxed beverages. There's no reason to believe that the same scenario won't play out on a larger scale in Philadelphia. I thought that urban politicians loved the little guys and despised the "big box" stores? I guess that's all empty talk if there's an opportunity to squeeze more money out of the public. What a surprise.

Thus, the former City of Brotherly Love continues its fundamental transformation — into the City of Big Brother.