The establishment press seemingly never misses an opportunity to smear a conservative's or businessperson's reputation upon their death. For those who need reminders, see how the Associated Press went after Tony Snow in 2008 and how the New York Times treated Cracker Barrel founder Danny Evins in 2012. Today, the AP took matters a step further, using the occasion of a soldier's death to smear his late grandfather.

Charles Keating IV is the Navy SEAL who died in Iraq on Tuesday. His grandfather was the late Charles Keating Jr. Given the elder Keating's historical prominence, the wire service would have been remiss if it had failed to note the family lineage. But in both its early breaking story, and in a later more detailed writeup, the AP treated what Charles Keating did decades ago as more important than a soldier who died yesterday.

Here was the breaking story as it appeared at 7:51 p.m. on Tuesday (red and green boxes added by me):

In the first red box, readers can see that AP couldn't even wait one paragraph to drag the dead soldier's grandfather into the story (with sloppy writing) — as if it believes readers should be more interested in Charles Keating Jr. today than a Navy SEAL who just gave his life for his country.

The second red box goes way over the top. If AP's opening-paragraph description of Charles Keating Jr. had appeared in this paragraph, it would have been understandable and proper treatment. But instead, AP cherry-picked the worst element of the grandfather's life — that he "served prison time" — without providing any of the back story.

But — If you're going to get into the story of Charles Keating Jr. and assert that he "served prison time," the AP owed its readers the inconvenient truth that the convictions which caused him to "serve prison time" were thrown out.

Economist Paul Craig Roberts, who is no fan of big business and certainly is not a conservative, described the Charles Keating Jr. saga perfectly in 2001: 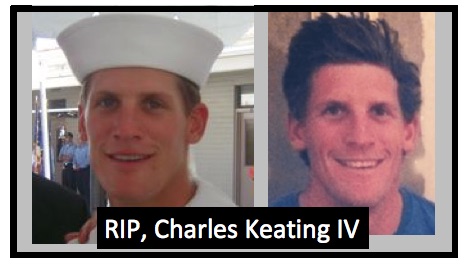 The Rights of Englishmen are: due process, the attorney-client privilege, equality before the law, the right to confront adverse witnesses, and the prohibitions against attacking a person through his property, bills of attainder, self-incrimination, retroactive law, and crimes without intent.

Each of these protective principles has been breached. Today prosecutors create bills of attainder by tailoring novel interpretations of law to fit the targeted defendant. A favorite tactic is to criminalize civil infractions, as in the Charles Keating savings and loan case. ... The ancient principle of mens rea – no crime without intent – has been obliterated.

Keating was convicted of a crime that did not exist until he was charged with it. Keating was caught up in the finger-pointing that resulted when ill-considered federal policies caused the collapse of the S&Ls and depleted the deposit insurance fund. Bonds issued by Keating's Lincoln Savings & Loan lost value. Some bond owners claimed that salesmen had assured them that the bonds were federally insured. Under civil tort liability, a case could have been made that the parent organization was economically liable to the bondholders, if misrepresentation about the bonds security could be proved. Instead, prosecutors, with Judge Lance Ito's acquiescence, transformed the civil tort doctrine into a felony. Keating was held criminally liable for the actions of subordinates even though he neither knew about nor approved of the alleged misrepresentations of the bonds security. Keating served four and one-half years in prison before federal district judge John G. Davies declared his conviction to be a violation of mens rea and the constitutional prohibition of ex post facto law and ordered his release.

To be clear, Keating:

(ultimately) admitted to having committed four counts of wire and bankruptcy fraud by extracting nearly $1 million from American Continental Corp. while already anticipating the collapse that happened weeks later. The federal prosecutors dropped all other charges against him and his son, Charles Keating III. He was sentenced to time served.

(In the end), Keating (was) without any convictions other than that from his plea bargain.

Soundbiting the Charles Keating Jr. saga by saying that he "served prison time," when none of his convictions stood up, is, especially in this tragic circumstance, a gratuitous, uncalled-for, petty and vindictive smear.

If we're going to go after people for bad decisions, maybe we should look at the headlines in the green boxes — but, to be clear, not in a soldier's obituary. So I won't elaborate on the obvious issues those headlines raise.

A later expanded version of the AP story at 8:32 p.m. (saved here for future reference, fair use and discussion purposes) kept the text of Paragraphs 1 and 5 seen above unchanged, and added some details about Charles Keating IV's life — in later paragraphs.

They just won't let go of their opportunity to smear, will they?

UPDATE, May 4, 11 a.m.: The headline at the AP's overnight story was "Navy SEAL killed in Iraq was close to disgraced grandfather." So now AP is smearing a soldier who gave his life for his country for having loved his grandfather.