At Politico tonight, the headline is: "Sanders crushes Clinton in Wisconsin." Given Mrs. Clinton's frontrunner status and the fact that, as the Milwaukee Journal Sentinel noted on Saturday (HT Ann Althouse), "Wisconsin has a nearly unbroken modern-day record of voting for party front-runners in its presidential primary," that's an accurate characterization of Sanders' 12-point lead over Mrs. Clinton with over two-thirds of the votes counted at the time of this post.

Politico's subheadline: "He’s won seven of the past eight contests, but will it matter?" That's a fair question, given the anti-democratic situation with superdelegates in the Democratic Party. It's also an assessment based on the fact that much of the rest of the establishment press has been determined to write off Sanders' recent resurgence, including tonight's win, as likely irrelevant.

The Associated Press went so far tonight as to pooh-pooh Sanders' Wisconsin victory as being due to "an overwhelming white electorate," and betrayed clear frustration that the Vermont Senator has been on a roll.

One had to scroll down the page to "LATEST NEWS" to find evidence that Sanders won, and his victory wasn't even the top story there.

Despite headlining the story at its front page as relating to Cruz, AP's story covered both races. Here what Julie Pace and Scott Bauer wrote about Sanders' victory (bolds are mine):

For Sanders, Wisconsin was the latest in a string of victories that have given him an incentive to keep competing against Clinton. But he still trails her in the pledged delegate count and has so far been unable to persuade superdelegates — the party officials who can back any candidate — to drop their allegiance to the former secretary of state and back his campaign. 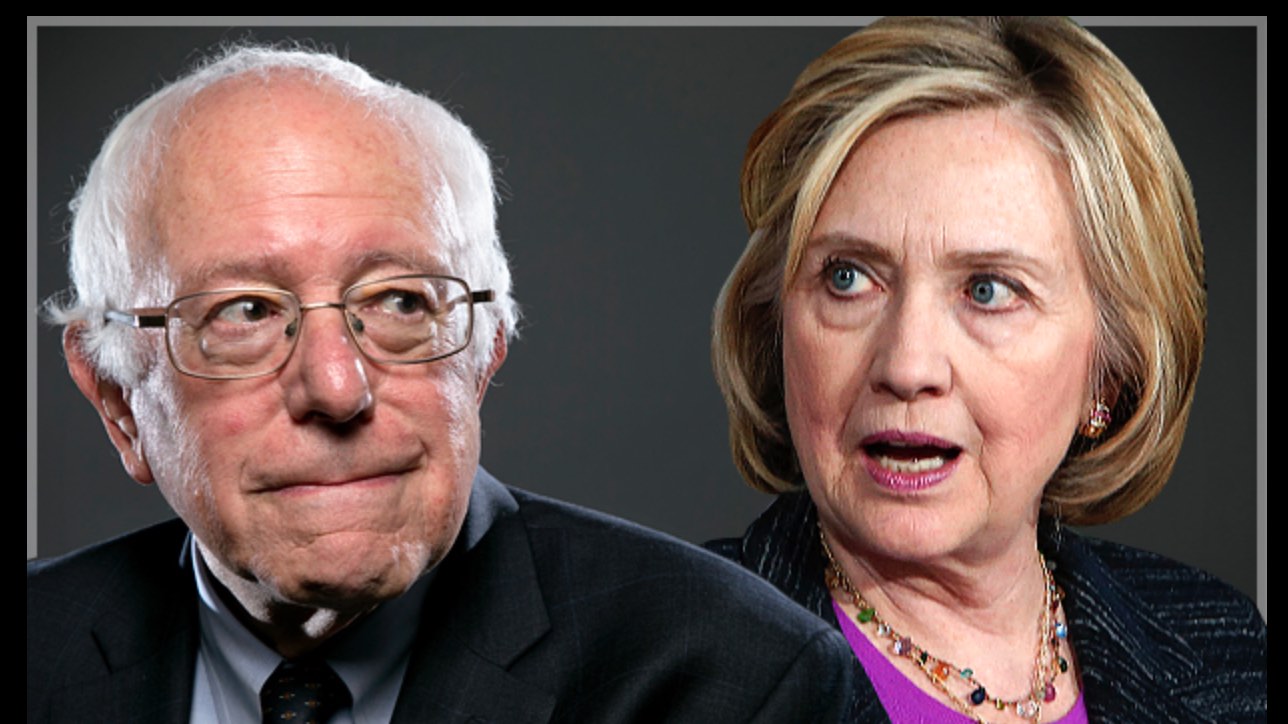 The results in Wisconsin make it likely both parties' primaries will continue deep into the spring, draping front-runners Trump and Clinton in uncertainty and preventing both from fully setting their sights on the general election.

For Sanders, Wisconsin was favorable territory, with an overwhelming white electorate and liberal pockets of voters, and the Vermont senator's victory gives him a fresh burst of momentum.

Because Democrats award delegates proportionally, Sanders and Clinton will both emerge from Tuesday's contest with more delegates.

Heading into Wisconsin, Clinton had 1,243 to Sanders' 980 based on primaries and caucuses. When including superdelegates, the party officials who can back any candidate, Clinton holds a much wider lead — 1,712 to Sanders' 1,011. It takes 2,383 delegates to win the Democratic nomination.

Clinton's campaign has cast her lead as nearly insurmountable. Yet Sanders' continued presence in the race has become an irritant for the former secretary of state, keeping her from turning her attention to the general election.

Darn that Bernie Sanders. He's winning in predominantly white states and distracting Mrs. Clinton from the all-important task of winning the general election.

It seems quite likely that the dedicated lefties at AP — Pace is boastfully proud of how she kept Obama administration negotiations with Iran secret in 2013 (at the administration's request), and Bauer has been obsessed with attempting to discredit Wisconsin Republican governor Scott Walker for the past five years — know that the Huffington Post has detected significant erosion in Mrs. Clinton's support among minorities. It's also quite likely that they've deliberately chosen to ignore it.

The AP is in full-blown Hillary defense mode because it believes she can win the presidency, and that Sanders can't. This also explains why the wire service has consistently taken little interest in Mrs. Clinton's private server/email scandal, and when it does, it's only to insist that there's little chance she'll be indicted.

The rest of the establishment press is largely following the AP's lead. A person who watched this morning's Today Show on NBC described it to me as a non-stop downplaying of Sanders' imminent Wisconsin win. One reporter apparently described Sanders' lead in the polls as "negligible." An objective reporter would have described it as "small, but within the margin of error." It turned out to be double-digit big. Scott Whitlock at NewsBusters also noted this afternoon how the Big Three broadcasts hyped Mrs. Clinton's delegate lead as "nearly insurmountable."

On Sunday, Sanders supporters protested what they see as disproportionately low coverage of their candidate at CNN's Hollywood offices. They concentrated their ire on the network's heavy focus on Donald Trump, but they're missing the main point, which is that on their side of the ledger Mrs. Clinton is getting far more coverage, and far more favorable coverage, than Sanders. That's because CNN, and the establishment press in general, is obviously protecting her in the interest of winning the general election at all costs.