Critics who warned in 2010 that the odious Dodd-Frank law's Consumer Financial Protection Bureau would become a rogue agency which would become a largely unaccountable behemoth on a mission to create problems where none exist could not have been more correct.

Sadly, searches on terms relevant to one of the agency's latest controversies involving the distribution of funds in a two year-old auto-loan industry settlement indicate that only two media outlets have given it any attention; separately, a search at the Associated Press on the agency's name also returns nothing relevant. Those two sources are the Daily Caller, whose January 21 story first reported that "White loan borrowers are collecting settlement proceeds ... intended for black, Hispanic and Asian people," and a Monday Investor's Business Daily editorial. That's it.

IBD's editorial, once again exposing information that the establishment press's beat journalists should have reported, describes the "shakedown" in detail:

New smoking-gun documents reveal the assumptions Obama’s race bullies make about lending discrimination while sifting through auto loan data are even wilder than the ones they make against mortgage lenders.

Internal Consumer Financial Protection Bureau and Department of Justice memos and PowerPoint presentations ... prove that the Obama regime has been guessing the identities of hundreds of thousands of alleged victims of discrimination.

In fact, in order to distribute an $80 million settlement against Ally Bank — the biggest on record for the auto industry — the administration is literally just making up victims to meet the number prosecutors announced in the settlement two years ago. The government has had to send out more than 400,000 queries to Ally borrowers asking them if they are black or Hispanic.

It has no idea who, if anybody, was harmed.

...  thousands of payment checks are being cut to non-victims, many of whom aren’t even minorities.

This latest news strikes to the weakness of the original findings against Ally — that is, the government didn’t know the race of the actual borrowers to begin with. It had to construct a model to estimate the bias.

... They are using the same unreliable, error-ridden model to guestimate the liability and the pool of victims in ... cases ... against Honda and Fifth Third Bank (and) At least eight other banks in the $900 million auto finance industry.

Outrageously, the head of the CFPB’s Office of Fair Lending is quoted in one memo as saying that overestimating discrimination was better than the risk of missing potential liability. This is nothing short of a frame-up.

... Many — including members of the Congressional Black Caucus — have crossed the aisle to vote for bills to reform the CFPB and rein in its rogue director.

... With their meritless discrimination cases, they are jacking up the cost of auto loans for average Americans — including minorities with good credit. And with their bogus payouts to phantom victims, they are also denying employees of Ally and these other auto companies, many of whom are minorities, tens of millions of dollars in pay raises and bonuses.

It's bad enough if IBD is right about the impacts it identified, but there may be an even worse result by the time the dust settles on the recently created auto-loan bubble: 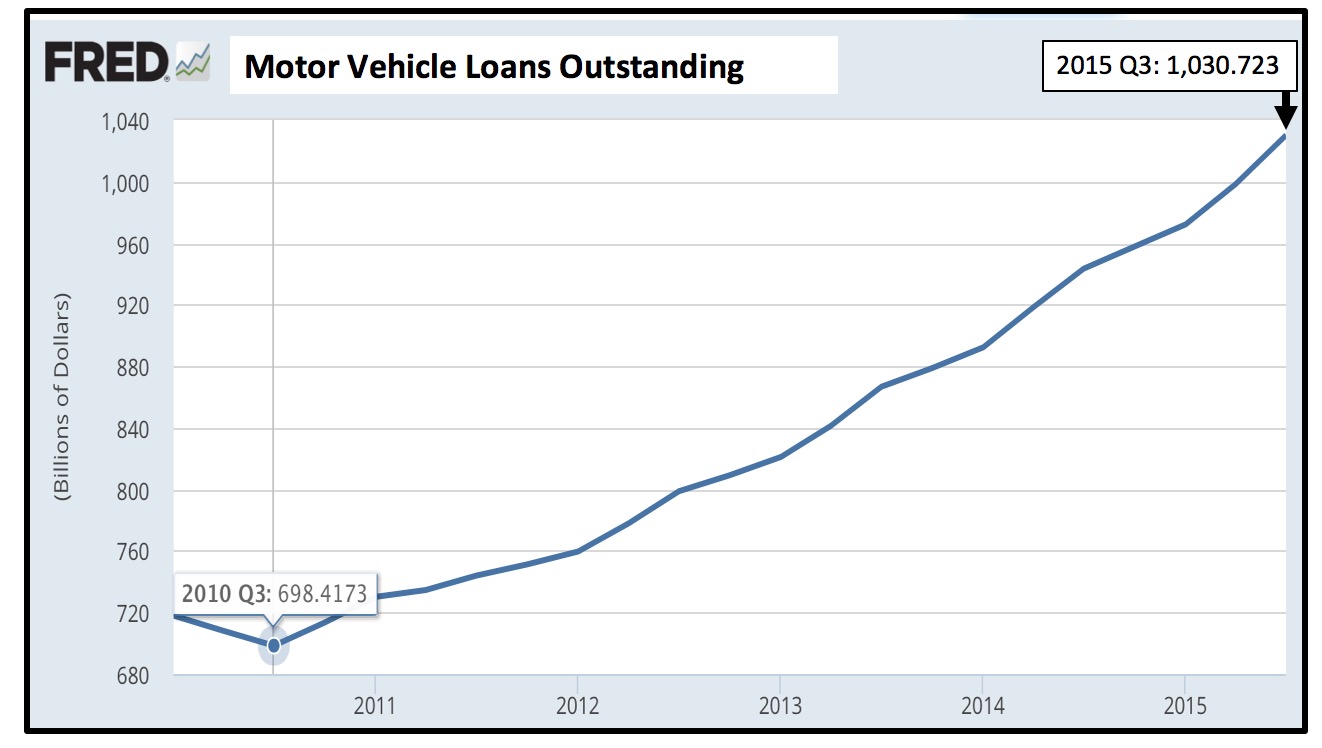 It's no secret that obtaining a loan for a new car or truck has become incredibly easy during the past several years, and that credit leniency has been a major contributor to the auto industry's post-recession growth. The reason the "$900 billion auto finance industry" is as large as it is — actually, as of last year's third quarter, outstanding vehicle loan balances totaled $1.03 trillion, up from less than $700 billion five years earlier — is that credit standards have been loosened to the point where, as one commentator drily observed, all you have to do to qualify is have the ability to "fog a rear view mirror."

This loosening is reminiscent of banks' reactions to the government's mortgage-loan bullying and market disruption a decade ago. Federal government auditors used the Community Reinvestment Act as a club to force banks to lend money to applicants whose credit histories would ordinarily cause them to be turned down. "Government-sponsored entities" Fannie Mae and Freddie Mac in turn lowered the required credit scores on loans they would purchase from banks making these loans, taking them off the banks' hands and making the banks indifferent to making unwise loans. Fannie Mae and Freddie Mac went one step further, misrepresenting the underlying quality of the mortgage loans in mortgage-backed securities sold to investors. The results? The housing and mortgage-lending meltdowns.

History is well on its way to repeating itself in auto loans. It seems accurate to contend that CPFB's war on auto lenders is causing a similarly lenient response, saddling many borrowers with loans they have no chance of repaying if their economic circumstances are disrupted even to a small extent. To keep the deal flow going, the industry has resorted to making eight-year vehicle loans.

Thus, the rogue CPFB's actions have contributed to another loan bubble, and have arguably inflated the economy's still-mediocre reported growth. Assuming it bursts, as all such bubbles have in the past, a major auto-industry pullback, also exacerbated by excessive inventories of unsold cars, appears inevitable.

But no one in the business press cares. Thus, Investor's Business Daily felt compelled to do their work for them. They must be wondering where they should send the bill for their services.