New York Daily News covers on November 18 ("NRA'S SICK JIHAD" — noted at the time by NB's Kristine Marsh) and today ("NOWHERE TO HIDE, JIHADI WAYNE") have accused the NRA of placing the right to purchase guns ahead of public safety from terrorist attacks.

The paper's bogus claim is based on the NRA's opposition to legislation prohibiting anyone on the government's "terror watch list" from purchasing a gun. While the idea might appear to have sensible on the surface, it doesn't survive scrutiny, as the folks at the group's legislative arm painstakingly explained over four years ago: 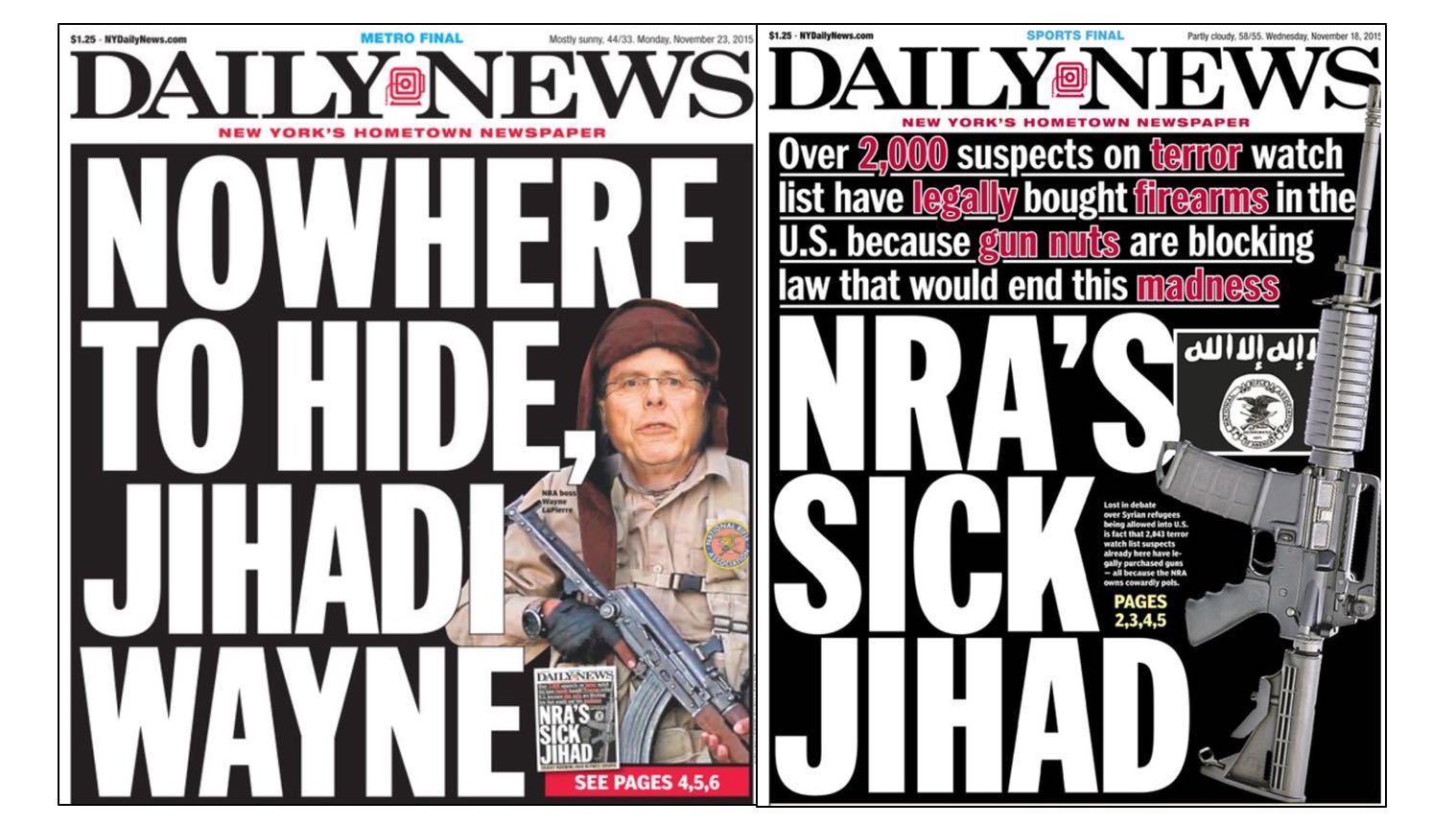 Gosh, that sounds like there are all kinds of unconstitutional due-process violations embedded in such legislation. In fact, this type of legislation is so flawed that even the ACLU(!) opposes it:

We write today about the use of terror watch lists to screen gun purchases. The ACLU believes that the current terror watch list process is deeply flawed. Evidence from numerous government reports document ill-designed and inaccurate lists with serious inadequacies in the process for placing and removing individuals from the list. Even worse, the lists are shrouded in secrecy: who is on the list, the standard for placement on the list, and the requirements for removal from the list are all secret. Given these problems, we do not believe that anyone should be deprived of the right to purchase a gun, or the right to fly, or any other benefit of membership in civil society based solely on placement on a terror watch list.

Here are some of the NRA's more detailed objections stated four years ago:

The NRA went on to point out that the Obama administration has had a horrifying tendency to attempt to classify everyday people who care about the course this nation is taking as "potential terrorists," including military veterans, prolife demonstrators, and anyone who opposes stricter gun control or purchases guns.

If the Daily News had the arguments on its side, or if there are new elements in such legislation which address the NRA's objections, it would make them or identify them in a reasoned manner. Instead, the paper has admitted it has no tenable arguments and no new news by demonizing the NRA, while strongly implying that anyone who agrees with the NRA's position is a de facto terrorist enabler.

In March 2014, the Daily News was identified as one of ten U.S. newspapers in the deepest financial distress. The fact that it's gone to the cover-story well twice in less than a week in its obsession to smear the NRA would seem to indicate that it richly deserves to be in financial trouble.