I'm sure we all feel better now that Hillary Clinton, as reported by the New York Times late Wednesday afternoon, "took responsibility" for "her decision to use only private email while she was secretary of state."

Well, no — and Times reporter Maggie Haberman should (and probably does) know why that doesn't cut it. Mrs. Clinton still maintained on Wednesday that investigations currently in process "will prove that I never sent, nor received, any email that was marked classified." Information already known shows that contention to be false, and the noise about "markings" is irrelevant in any event.

Here are the first six paragraphs from Haberman's report at the paper's First Draft blog (bolds are mine throughout this post):

Hillary Clinton Takes ‘Responsibility’ for Email Use, Saying It ‘Wasn’t the Best Choice’ 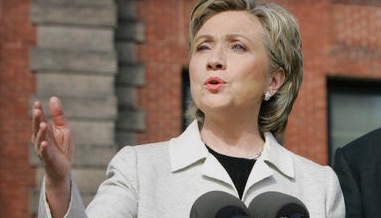 Hillary Rodham Clinton said Wednesday that she understood why people had questions about her decision to use only private email while she was secretary of state and that she took responsibility for that decision, a shift from her past remarks about an issue that has dogged her since shortly before she began her presidential campaign.

Her remarks, made during a campaign stop in Iowa, came as Mrs. Clinton has faced growing criticism for making light of her email use, which Democrats fear has become an albatross on her hopes of winning the White House. “What, like with a cloth or something?” she said to a Fox News reporter last week who had asked whether she had “wiped,” or erased, her email server before turning it over to the F.B.I. recently.

“I know people have raised questions about my email use as secretary of state, and I understand why,” Mrs. Clinton said Wednesday. “I get it. So here’s what I want the American people to know: My use of personal email was allowed by the State Department. It clearly wasn’t the best choice. I should’ve used two emails: one personal, one for work.”

She added: “I take responsibility for that decision, and I want to be as transparent as possible, which is why I turned over 55,000 pages, why I’ve turned over my server, why I’ve agreed to — in fact, been asking to — and have finally gotten a date to testify before a congressional committee in October.”

“I’m confident that this process will prove that I never sent, nor received, any email that was marked classified,” she said.

The inspector general for the nation’s intelligence agencies found that four emails out of a random sample of 40 of the tens of thousands on her server contained information that was classified, although it wasn’t marked that way at the time.

After characterizing the situation as a partisan witch hunt for weeks, we're all of a sudden supposed to believe that she "understand(s) why" people have raised questions. Translation: "It's getting pretty hot around here, so I'm going to break open a window and hope that things cool down."

Team Clinton's obsession with "markings" is getting really annoying, because, as former Attorney General Michael B. Mukasey wrote in the Wall Street Journal on August 14 (i.e., 12 days ago, Maggie Haberman), their presence or absence is legally irrelevant:

Clinton Defies the Law and Common Sense
The question of whether Hillary Clinton’s emails were marked top secret isn’t legally relevant. Any cabinet member should know that.

... The Espionage Act defines as a felony, punishable by up to 10 years, the grossly negligent loss or destruction of “information relating to the national defense.”

... If other emails of like sensitivity (to the several found among what has been retrieved — Ed.) are among the 30,000 Mrs. Clinton erased, that is yet more problematic.

... if Mrs. Clinton caused to be wiped out emails that might have been anticipated to be of interest to a congressional committee, such conduct would come within the sweep of the statute. That, by the way, is the obstruction-of-justice statute, as revised by the Sarbanes-Oxley law, passed by Congress in 2002 while Mrs. Clinton served as a senator, and for which she voted.

... It is no answer to say, as Mrs. Clinton did at one time, that emails were not marked classified when sent or received. Of course they were not; there is no little creature sitting on the shoulders of public officials classifying words as they are uttered and sent. But the laws are concerned with the sensitivity of information, not the sensitivity of the markings on whatever may contain the information.

... Once you assume a public office, your communications about anything having to do with your job are not your personal business or property. They are the public’s business and the public’s property, and are to be treated as no different from communications of like sensitivity.

Getting beyond the markings, Sarah Westwood at the Washington Examiner reported the following yesterday (HT Hot Air):

... Despite her campaign's claims that Clinton was simply a "passive recipient" of classified information, a review of her emails indicates she wrote messages that are now classified.

In November 2009, an aide to David Miliband, Clinton's British counterpart, sent from his "home account" a classified note from Miliband to Abedin in the hopes of it reaching Clinton's eyes only.

Abedin later passed the note to Clinton and indicated it was information Miliband "doesn't want to send through the system."

Getting back to what Mukasey wrote, contrary what public servants are supposed to do, these are from all appearances deliberate attempts to conduct "the public business" without public scrutiny. By continuing to claim that she "never sent, nor received, any email that was marked classified," she's not "taking responsibility" for anything of substance.

Readers who visit the Times link may wonder if the Old Gray Lady, with help from the Associated Press, might be telegraphing a hint to the former First Lady.

The photo accompanying Haberman's writeup, taken by the Associated Press's Charlie Neibergall, who seems to excel in message-communicating photos — he's the guy who took a photo with a drawing of a gun pointing at GOP presidential candidate Ted Cruz — is 95 percent pitch black, and shows Mrs. Clinton behind a curtain. If it weren't for the photo's caption, you might think that the curtain, which is only about three inches or so open at the top of her face and about six inches open at her waist, is about to close.