The time stamp on an Associated Press report on Hillary Clinton's email "worries" ("CLINTON FACING FRESH WORRIES IN CONGRESS OVER EMAILS") by Ken Thomas and Julie Bykowicz this morning (saved here for future reference, fair use and discussion purposes) is 11:21 a.m. Eastern Time.

Despite that time stamp, the report fails to mention a bombshell report from Reuters ("Dozens of Clinton emails were classified from the start, U.S. rules suggest") originally posted at 5:17 a.m. (time stamp has since been updated). Going even further back, the AP story fails to mention a Thursday afternoon story about how "A federal judge has ordered the State Department to cooperate with the investigation into the Hillary Clinton private email scandal." The decision to ignore these developments is in all likelihood deliberate.

Here are the report's first four paragraphs (bolds and numbered tags are mine):

Hillary Rodham Clinton is facing fresh worries among congressional Democrats about her use of a private email account while serving as secretary of state, [1] as new polls signal that the inquiry is taking a toll on her presidential campaign. 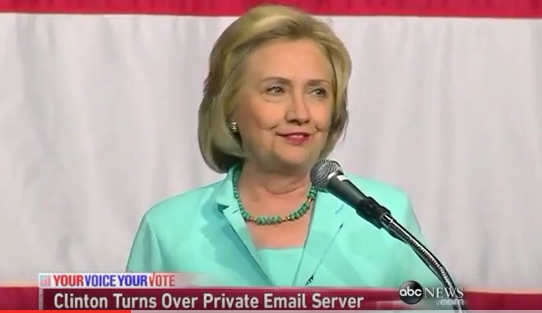 The Democratic front-runner's campaign has taken steps to defend her against allegations she may have put classified information at risk by using a private email account and server, arguing she never sent or received material considered classified at the time. [2]

But Democratic lawmakers said Clinton's campaign has not adequately explained the complicated nature of the email review and panned some of her attempts to use humor to talk about the probe. Clinton joked at a Democratic dinner in Iowa last week that she liked the social media platform Snapchat because the messages disappear by themselves. And she shrugged off questions about her server being wiped clean, asking facetiously in Nevada, "Like a cloth or something?" [3]

"I don't think the campaign has handled it very well," Florida Sen. Bill Nelson told The Associated Press on Thursday. "I think the advice to her of making a joke out of it - I think that was not good advice." [4]

[1] — The "worries" may be fresh, but the news the AP has relayed surely isn't. Here's yet another quite relevant factoid the AP pair failed to report: Federal Judge Emmet Sullivan "added fresh fuel to the incendiary controversy over Hillary Clinton’s email, asserting during a hearing Thursday that she violated government policy by storing official messages on a private server when she worked as secretary of state." I'll bet the "Congressional Democrats" who are concerned about Mrs. Clinton's electoral viability were quite aware of these developments at 11:21 a.m. this morning.

[2] — As of when the AP pair wrote their story, the number of informed people who actually believe that Mrs. Clinton "never sent or received material considered classified at the time" on her private server was rapidly approaching zero. The wire service is clearly trying to ensure that relatively uninformed people don't figure that out.

[3] — How interesting. As I noted on Wednesday, the AP deliberately chose not to report Mrs. Clinton's smart-aleck "with a cloth?" remark when it happened. They apparently only care about it now because it concerns Congressional Democrats. They should have cared about it from the beginning because the American people deserve to understand that the Democratic frontrunner acted like an arrogant, condescending jerk — and we know the AP would have screamed about anything even remotely similar uttered by a Republican or conservative presidential candidate.

[4] — Who says that the idea of joking about it was "advice"? It's at least an even bet that Mrs. Clinton herself thought it would be a good idea all on her own, and her yes-men and yes-women said, "Go for it!"

It's almost impossible to imagine that Ken Thomas, Julie Bykowicz and the rest of those covering the Obama administration and the presidential race at AP were unaware of yesterday's court news or this morning's Reuters report. Thus, the decision to ignore these developments is in all likelihood deliberate. and demonstrates that the wire service won't treat real news adversely affecting Mrs. Clinton as a story until they can publish her defense.

That's not journalism. It's facilitation of response team propaganda.