CBS, Time Editor Push 'Deadly' Global Warming: 'Not Subject to Politics'...Or Is It?

The results surely pleased CBS liberals: 56 percent picked “serious impact now,” compared to 23 percent for “sometime in the future” and 17 percent for “no serious impact at all.” Just two years ago, the same question was split 46/28/24.

But all the panicked reporting on global warming is half-baked, in this political sense. The media have strongly sold, over and over and over again, going back to 1988, that warming is a crisis, that its consequences are dire. They’ve sold the problem...although it ends up at the bottom of public concerns.

But what about the “solution”? Notice that Obama’s staunchest actions are all executive actions. Congress couldn’t pass “cap and trade” legislation back when Democrats controlled both houses. CBS doesn’t ask Americans what they will be giving up to head off this apparent climate catastrophe. How high would they like to tax the price of gas? $5 a gallon?

Anyway, while searching for CBS reporting on climate, we came across this segment of liberal arrogance on CBS This Morning: Saturday on December 17. The guest was Jeffrey Kluger, a very biased editor-at-large at Time magazine, who insisted that dramatic political "solutions" to global warming were "not subject to" politics:

ALEX WAGNER: Amid fears of global warming, a distinct chill has come over the scientific community both here and around the world.

ANTHONY MASON: Well, President-Elect Donald Trump says he has an open mind when it comes to the issue of climate change, his appointments appear openly hostile to addressing the problem. Some are even looking to defund ongoing research to monitor environmental changes. Here to talk about it, Jeffrey Kluger, Time Magazine’s editor-at-large. Jeffrey, good morning.

MASON: First of all, how concerned is the scientific community about the changes in the administration?

KLUGER: The community is concerned and it should be concerned. Look. Global warming is an established fact. It's immutable, it's non-negotiable, it's not subject to politics. Global warming doesn`t read tweets. It doesn`t care about who won the Electoral College vote. It`s an immutable bit of science and what we`re seeing is an administration that is choosing to appoint people who are hostile to that very idea, who, at best, will dodge it by saying, well, I`m not a scientist, I don`t know. Well, then listen to the scientists! Ninety-seven percent of whom say that global warming is real, it`s happening, and it`s a deadly threat.

But it's not beyond politics, since Kluger began cheering the idea that lifetime eco-bureaucrats will fight Trump with "passive aggression":

WAGNER: Jeffrey, what about the discrepancy between the agency heads and the thousands of civil servants who actually staff these agencies and have done a large part of the climate work for the Obama administration? 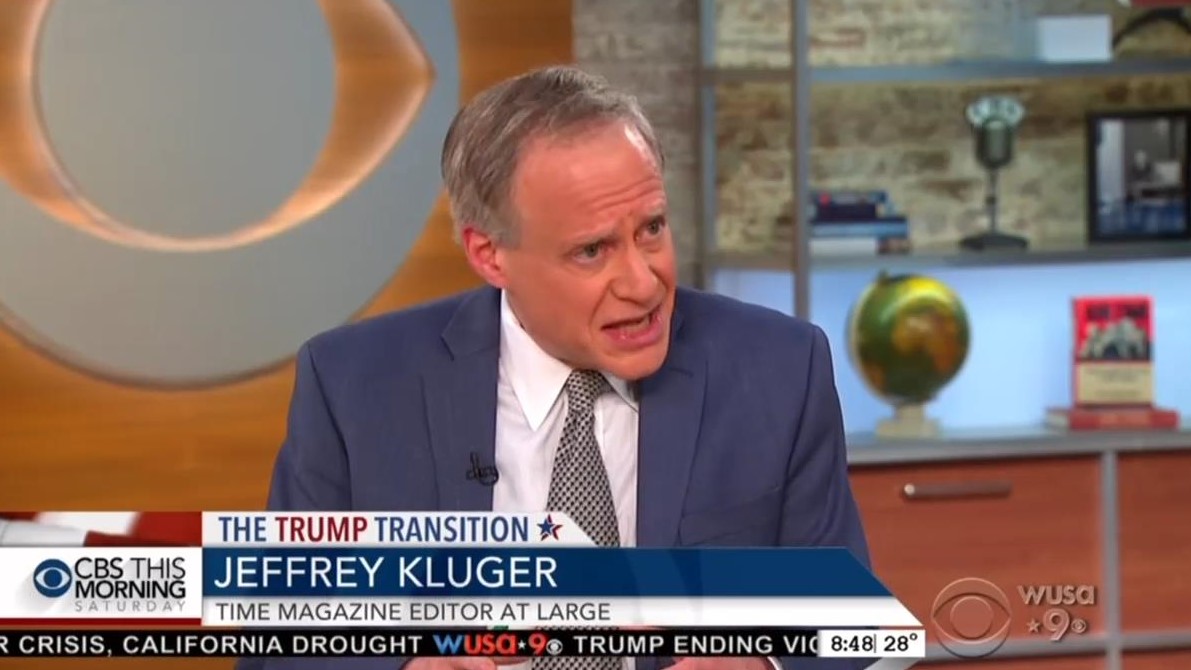 KLUGER: Well, this is what we're seeing and there is some hope here because a lot of these people are lifetime civil servants. They have the power of slowdown. They have the power of, for lack of a better term, passive aggression. Of course, they're required to obey their superiors but there is work that's done zealously in pursuit of a good cause and then there's work that's done grudgingly and there's a quiet power in civil servants here but we're seeing some danger already. The Trump transition committee has already sent a seventy-four-question questionnaire to the Department of Energy.

MASON: Which they pushed back on, though?

CBS's recruit from MSNBC asked about the part of the Trump agenda that's backed by the coal states:

ALEX WAGNER: What about the fact that President-Elect Trump has said he'll scrap the president`s Clean Power-- President Obama's Clean Power Plan? How effective can he be in unwinding that? Has industry not already moved forward to some degree on this?

KLUGER: Industry has already moved forward and this is a good thing because this is where you see the power of the market which conservatives purport to like and we all should like the power of the market. That has already moved ahead to adapt to a clean energy environment. Coal-fired plants according to this rule are required to upgrade their equipment. Now it`s already being appealed, the law, the regulation is being appealed by people like Rick-- Scott Pruitt, who is the new head of the EPA.

KLUGER: And if the D.C. circuit court overturns the regulation, that will be it, it will be overturned. If they uphold it, then the Trump administration will probably appeal it to the Supreme Court.