N.Y. Times Columnist: Who Cares About a 'Tiny Group' Like the Black Panthers? 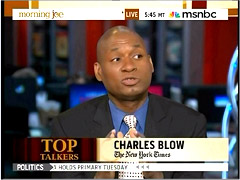 While MSNBC has spent a week or so playing the allegation of Tea Party racism in heavy rotation, on Monday’s Morning Joe on MSNBC, anchor Mika Brzezinski devoted a segment to the controversy over the New Black Panther Party’s voter intimidation. New York Times editorial writer Charles Blow denounced the group and agreed that the Justice Department needs to answer questions, but he predictably tried to argue conservatives are outrageous in suggesting the "strange logic" that Team Obama’s actions say something about Team Obama and racial justice:

The political part of it is, I think, the most inflammatory part of this. It's strange logic. The idea that the Obama administration – which is what's happening here – people are trying to tie the Obama administration to black radicalism. And that has been happening since the campaign and it continues to happen. Not everybody, but it's an electoral goal if you can tie him somehow to black radicalism. It's strange logic to think that this tiny group, he somehow benefits politically from protecting them. They have a summit the year before this voter intimidation thing came up. There were a hundred people there. There's nobody there. There's nothing to gain. In fact, there's everything to gain in prosecuting.

The "tiny group" argument is especially fascinating. The liberal media have been consistently excited at following a tiny group of white racist organizations, accepting repeated tips from the leftist Southern Poverty Law Center. The liberal media made an enormous story in 2007 out of a "tiny group" of people who hung nooses from a tree in the schoolyard in Jena, Louisiana.

Blow is also the columnist who caught a wave of condemnation after he called a diverse Tea Party rally in Dallas a "minstrel show," because minorities aren’t supposed to say conservative things. Blow kept coming back to how it would be grossly unfair to try and make political hay out of the Black Panthers, on the same network that’s been trying to make political hay out of Tea Party racism allegations:

MIKA BRZEZINSKI: The argument, isn't it, and correct me if I'm wrong, that the guy holding the stick is being prosecuted while the other guy is not. Why not both of them? That's one of the questions. But he lived there.

BLOW: But also he was a registered poll watcher. They police showed up, they took the guy away with the billy club. They left the other guy there. I mean, there's a certain point where, and I guess that's what the investigation will tell us. It's a complicated case. The political part of it, I mean. If it is being politicized it's being politicized on the right. You have Erick Erickson of RedState.com saying that every Republican should make this Black Panther case the Willie Horton of this year.

The other guest in the Morning Joe segment was Rep. Frank Wolf (R-Va.), who hammered away at how he not only can’t get any answers from Attorney General Eric "Nation of Cowards" Holder, and even the Justice Department’s Inspector General isn’t cooperating:

WOLF: Why isn't Attorney General Holder answering the questions and why won't the IG look at it?

PS: Sharp eyes at MRC's TimesWatch added Blow didn't seem to think “tiny" meant harmless in a April 18, 2009 column on the alleged epidemic of U.S. veterans coming home from Iraq and Afghanistan and joining hate groups: “The only debate we should be having is about the best way to protect our newest veterans from falling prey to this handful of military apostates. If they only recruit a few, that is still too many. Terrorists have shown the world time and again that a few well-trained men is all it takes.” That piece came with a helpful visual aid showing the number of "Veterans in White Supremacist Groups." The total confirmed or claimed over seven years? 203 out of a group numbering millions.

(Hat tip to MRC's Alex Fitzsimmons for the transcript.)