Why Are Journalists Hiding These Radical Democrats Who Support Abortion Up Until Birth? 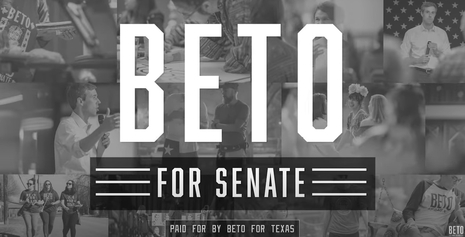 In the month of August, Joe Biden’s approval rating climbed back into the low 40s and the Democrat/Republican congressional preference poll closed to a statistical tie. The liberal network newscasts are eager to promote a new narrative: Democrats are making a comeback in the midterms and it’s all because Republicans are extreme on abortion.

CBS, CNN, and other outlets have pushed the idea of a “flashpoint” over supposedly rigid Republicans holding outrageously severe positions on abortion. But Democrats in Congress this summer supported legislation that would dismantle most, if not all, restrictions.

(According to CNSNews.com, the Susan B. Anthony List denounced a vote on the bill as the “Abortion on Demand Until Birth Act.”)

Additionally, Democratic senatorial and gubernatorial candidates hold radical views on the issue, supporting abortion right up until birth. Only 34 percent of Americans support abortion in the second trimester and just 19 percent in the third. So this position is the definition of extreme.

Yet you wouldn’t know that by watching the networks. MRC's NewsBusters analysts looked at the morning and evening newscasts on ABC, CBS and NBC, as well as the Sunday chat shows from January 1, 2022 through August 31, 2022, specifically coverage of five prominent Democratic candidates who support abortion up to birth. We found NO coverage of the radical nature of their positions.

Here’s the five extreme Democrats the media don’t want you to know about:

Beto O’Rourke is a high profile Democrat who has made failed runs for the White House and the Senate and is now challenging incumbent Republican Greg Abbot for governor. He’s also uncompromisingly pro-abortion right up until the minute before birth. As noted by the Free Beacon: “Democratic presidential candidate Beto O'Rourke on Monday night expressed his support for third trimester abortions, specifically the day before birth.”

O’Rourke on August 22 told a pro-life questioner: “This is a decision that neither you, nor I, nor the United States government should be making. That’s a decision for the woman to make.” 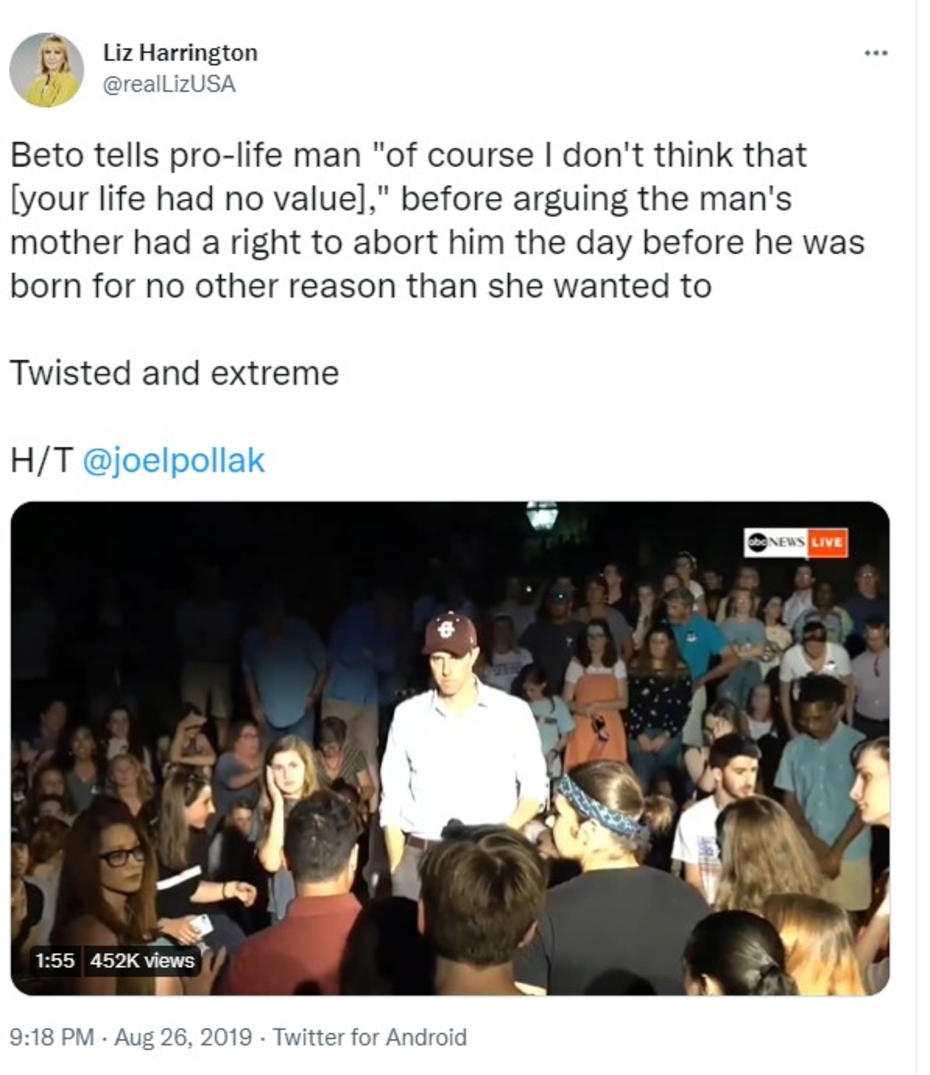 No explanation on the networks of just how extreme O’Rourke’s position is, despite 27 mentions of O’Rourke since January 1. The only mention at all of the Democrat’s abortion stance came on the May 6 Today with a clip of him saying this about overturning Roe vs. Wade: 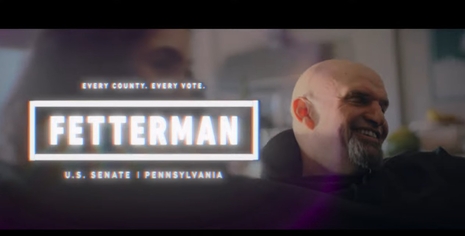 As noted by National Review in April, Lieutenant Governor John Fetterman was asked in a debate: “Are there any limits on abortion you would find appropriate?” “I don’t believe so, no,” Fetterman replied.

It’s not as though Fetterman’s candidacy has been ignored. Since January 1, there have been 25 mentions, many focusing on his stroke, recovery and return to the campaign trail. Yet nothing on his radical views on abortion. 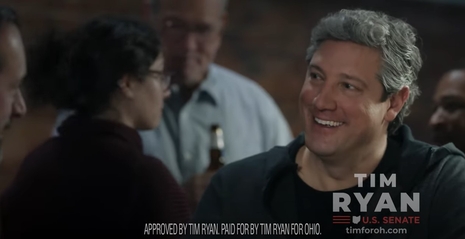 Ohio’s Senate race is competitive. According to Real Clear Politics, just 3.7 points separate Tim Ryan from GOP opponent J.D. Vance. Network journalists have mentioned Ryan 16 times on the networks since January 1. What they won’t tell you is just how fanatical Ryan’s devotion to abortion really is.

Ryan is so rigid that even CNN noticed. On the August 28, 2022 State of the Union, co-host Dana Bash interrogated: “You’re criticizing your Republican opponent for not supporting abortion exceptions. So, I want to ask about your position. What restrictions, if any, do you believe there should be on abortion?”

After the Democrat repeatedly dodged the question, Bash concluded, “It sounds like you’re saying no restrictions.” Ryan stared into the camera for a few seconds before responding. Clearly, he wasn’t used to being pressed on the issue. But this shouldn't come as a shock. Ryan’s support for abortion up until birth has been ignored on the networks. 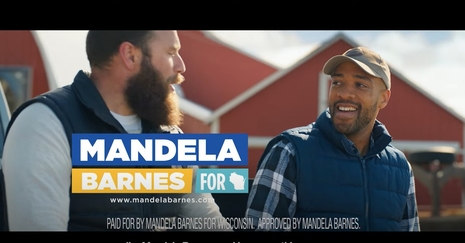 According to the Real Clear Politics polling average, Mandela Barnes has a very good chance of unseating incumbent Republican Senator Ron Johnson in Wisconsin. Barnes is leading by 4.3 points. Yet even though the Democrat effectively endorses abortion up until birth, the networks have been nearly silent on his stance. In May, he issued a statement calling for passage of the Women’s Health Protection Act. It would effectively legalize abortion up until birth.

In an endorsement, NARAL Pro-Choice America touted, “He has pledged his support for critical legislation to protect and expand reproductive freedom, including the Women’s Health Protection Act.”

But the networks have shown almost no interest in the potential that Barnes might unseat Johnson. Just three mentions. There’s been no coverage of his his fanatical support for abortion. 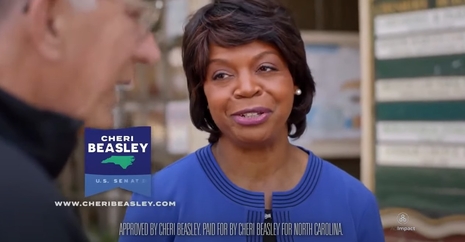 Like Wisconsin, the race in North Carolina is essentially tied. Republican candidate and Congressman Ted Budd has a 0.7 percent lead over Democrat Cheri Beasley, according to RCP. The network newscasts have barely noticed the race, however. Just three mentions since January 1. But no mentions of Beasley’s devotion to abortion at any time during pregnancy.

The radical NARAL Pro-Choice America endorsed Beasley back in February, noting, “Cheri Beasley has voiced her support for the Women’s Health Protection Act (WHPA).” As noted earlier, this would effectively legalize abortion up to birth, wiping out late term abortion bans, partial birth abortion, sex-selection abortion bans, among other restrictions.

These Democratic candidates are representative of many in the party who hold fringe positions rejected by the vast majority of Americans. Yet the pro-abortion media have hid the truth. What’s the explanation for all this? It’s hard to cover the extreme stances of politicians when journalists basically agree with them. Reporters should do some soul-searching and do their jobs: Tell Americans where all candidates stand on abortion.