The networks are eagerly pushing the idea that support for abortion rights against an extreme GOP is powering a Democratic comeback in the midterms. What they aren’t telling you about is just how radical many of the Democratic Senate candidates are. For instance, Tim Ryan in Ohio supports abortion up to the day of birth. And yet this hasn’t been a story on the network newscasts. His name has only come up twice in the month of August.

Yet, shockingly, it was CNN and anchor Dana Bash who committed journalism and grilled the Democrat on Sunday. Interviewing the candidate on State of the Union, she demanded, “You’re criticizing your Republican opponent for not supporting abortion exceptions. So, I want to ask about your position. What restrictions, if any, do you believe there should be on abortion?”

After Ryan dodged, saying doctors should be deciding this, not his GOP opponent J.D. Vance, Bash actually followed up, noting, “Well, but, as a legislator, you have to have some idea of what you want to do when you’re not a doctor. So should there be some restrictions when it comes to the law of the land?”

Again, Ryan refused to name a single restriction he’d support up to birth: “We can’t account for every single scenario.” And again, Bash amazingly demanded an answer: “So, that means —  it sounds like you’re saying no restrictions.” Ryan stared into the camera for several seconds before responding. Clearly, he wasn’t used to being pressed by journalists from the right.

By contrast, the networks are ignoring the radical positions of people like Tim Ryan. And this position isn’t new for the Democrat. Back in May, Fox’s Bret Baier seemed shocked that the Democrat supported no limits: “My question was about any limits to abortion at any point. Late term? Anything?”

Journalists have a responsibility to cover both ends of the abortion spectrum. If Republicans supporting most or all restrictions is extreme, so are opposing all restrictions.

The CNN segment was sponsored by AT&T. Click on the link to thank them for sponsoring real journalism. 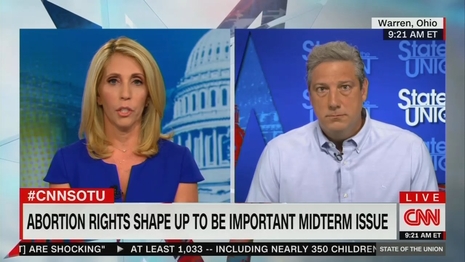 DANA BASH: I want to ask about an issue that has become central in this year’s midterm races, and that is abortion.  You’re criticizing your Republican opponent for not supporting abortion exceptions. So, I want to ask about your position. What restrictions, if any, do you believe there should be on abortion?

RYAN: Well, ultimately, this needs to be a decision between the woman and her doctor. And, of course, we don’t support abortion at the end of term, unless, of course, there is an extraordinary circumstance, where you’re eight months into a pregnancy and something very tragic is happening in that pregnancy, where you have a room, you have bought toys, you have clothing for the baby, everyone’s excited, and then something tragic happens.

RYAN: That needs to be left up to the doctor, not the J.D. Vance or Ted Cruz or anybody else. That’s a very serious situation.

BASH: Well, but, as a legislator, you have to have some idea of what you want to do when you’re not a doctor. So should there be some restrictions when it comes to the law of the land?

RYAN: Well, you ultimately —  I think the decider has to be the woman and her doctor. We can’t account for every single scenario. And, really, the extreme —

BASH: So, that means —  it sounds like you’re saying no restrictions.

RYAN: Well, I think they’re —  no one’s supporting abortion towards the end, absolutely. No one’s for that. That rarely happens. But what we’re saying is, are we going to preserve the woman’s right to choose at the end to save her own life? I mean, come on. Like, should the government really be in there? That sounds very anti-American. And the extreme position is like where J.D. Vance, where, if you’re raped, you are forced to have the rapist’s baby, where there’s no exceptions at all.

And we see people who are underage who have to go to other states who have been raped. That’s insanity. That’s the extremism we’re talking about right now. And we are talking about 50 years of established law, the status quo. That’s what I’m for that seemed to work pretty well for the last 50 years. And the extremists, again, are trying to overturn that.