As conservatives gear up for a contentious midterm election, Republicans such as Ron DeSantis have been battling the bias and dishonesty of the press. As those on the right know, it’s not a new complaint. But it predates 2022, as well as Donald Trump, George W. Bush, George H.W. Bush, and Ronald Reagan. Way back on election night in 1962, after Richard Nixon lost his bid to be governor of California, he called out the liberal slant of the press.

In the so-called “last press conference,” Nixon blasted the assembled reporters, highlighting his days as an anti-communist crusader: “For 16 years, ever since the Hiss case, you've had a lot of- a lot of fun...You've had an opportunity to attack me and I think I've given as good as I've taken.” He lectured the press: “If they're against a candidate, give him the shaft, but also recognize if they give him the shaft, put one lonely reporter on the campaign who will report what the candidate says now and then.”

Showing just how long the liberal press has been a problem, Nixon argued:

I would hope that in the future, as a result of this campaign, that perhaps they would try at least simply to see that what both candidates say is reported, that if they have questions to ask of one candidate they ask the same questions of the other candidate. 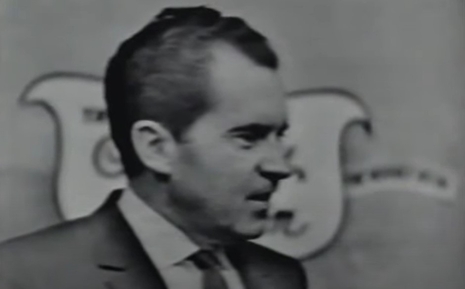 The bias was just as evident two years earlier, in 1960,  when Richard Nixon ran for president against John Kennedy. In the suburb new book Campaign of the Century: Kennedy, Nixon and the Election of 1960, historian Irwin F. Gellman sought to demolish the pro-Kennedy bias, not just in journalism, but also in the famous book Making of the President 1960.

As Gellman noted, Making of the President author Theodore White conceded his own bias 18 years later in 1978, saying that he wrote the book “as a story” featuring Kennedy as the hero: “Young, rich, heroic, witty, well read and handsome.”

In the preface to Campaign of the Century, Gellman noted:

The Making of the President 1960 lavished praise on Kennedy for his treatment of reporters. Between forty and fifty of the best newsman in the nation covered the election [of 1960], according to White. Kennedy had been a journalist and was a Pulitzer Prize-winning author; the press “had become his friends and some of them, his most devoted admirers.”

Most authors agree that reporters abandoned their objectivity to advance Kennedy’s candidacy. Ben Bradlee had been a reporter for fourteen years, mostly outside the United States when he met Kennedy early in 1959 while working for Newsweek. They became Georgetown neighbors and close friends. Bradlee described JFK as “graceful, gay, funny, witty, teasing and teasable, forgiving, hungry, incapable of being corny, restless, interesting, interested, exuberant, blunt, profane and loving.”

According to Gellman, the front page of the January 20, 1961 Washington Post had this embarrassing headline: “Best Prepared President in History to Take Oath Today.”

As for Bradlee, he would go on to be the executive editor of The Washington Post from 1965 to 1991. Does this man sound like someone capable of objectivity? The Post would later tell readers that “democracy dies in darkness.” But it sure sounds like it dies in smothering, fawning praise of a liberal politician.

Things haven’t change much in the last 60 years, have they?