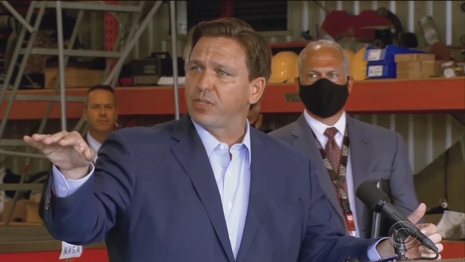 Tireless in their efforts to tarnish Republican Ron DeSantis, CBS ran a malicious and deceptive hit piece against the Florida governor on Sunday night’s 60 Minutes. DeSantis has been the unfair target of many journalists in the media, who were nearly a year late to New York Governor Andrew Cuomo’s deadly nursing home scandal.

Correspondent Sharyn Alfonsi’s whole report proposed DeSantis led a “pay for play” rollout of the COVID vaccine in his state. She spent the majority of the time speaking to his critics, including West Palm Beach Mayor Keith James who alleged wealthy communities were “jumping the line” to procure the vaccine. “It sounds like the Hunger Games!” an alarmed Alfonsi, seriously said.

She touted other critics like Democrat State Rep. Omari Hardy blasting DeSantis for not prioritizing minorities for getting the vaccine before seniors.

At a press conference recently, the CBS correspondent confronted DeSantis, accusing him of a “pay for play” scheme with the vaccine rollout, because he gave the most popular grocery chain in the state, Publix, the rights to distribute the vaccine in certain counties, weeks after receiving donations to his campaign from the store (which also donated to Democrats.)

However, CBS completely cut out DeSantis’s thorough takedown of Alfonsi's claim. In the original press conference, he explains for nearly two minutes how wrong the media’s assessment of this has been. "You don't care about the facts," he blasted Alfonsi. (Editor's Note: YouTube has taken down the original clip embedded but here it is captured by Daily Caller)

WATCH: CBS and @60Minutes excluded context from Florida Gov. Ron DeSantis in which he explains the steps his government took to make the decision to partner with Publix on vaccine distribution.

The 60 Minutes version is first, followed by the full answer from DeSantis. pic.twitter.com/2KRQKPLOe7

Instead, CBS cut the majority of his answer out and played this instead:

Like DeSantis, many people tore into CBS for this smear which isn’t based in reality:

@60Minutes I said this before and I’ll say it again. @Publix was recommended by @FLSERT and @HealthyFla as the other pharmacies were not ready to start. Period! Full Stop! No one from the Governors office suggested Publix. It’s just absolute malarkey. https://t.co/obkqYcbrzt

Oh wow. @60Minutes edited DeSantis' response to omit all of the substance that cut against their fake "scandal" narrative. Yikes. 😳 https://t.co/fo3xSnjxgU

Walmart sponsored this deceptive smear session, contact them at the Conservatives fight back page here.

SHARYN ALFONSI: This past week, president Biden said 90% of U.S. adults will be eligible for the covid vaccine by April 19 and will be able to get their shots within five miles of their home. That will be welcome news to many in Florida. For three months, we've been reporting around palm beach county, the third largest in the state. It's home to old-monied millionaires, but also some of the poorest day laborers and farm workers in America. During those months, we watched Florida's vaccine rollout deteriorate into a virtual free for all and watched as some wealthy and well-connected residents cut the line, leaving other Floridians without a fair shot.

WEST PALM BEACH MAYOR KETIH JAMES: People were saying, "Listen, this is a resource and I know it's out there and I'm going to use whatever leverage I have to get that resource." There were no rules.

JAMES: That's a pretty good way of putting it. And those who had the fiscal resources were going to use them in whatever way they could to get this vaccine.

ALFONSI: So, why did the governor choose Publix? Campaign finance reports obtained by "60 minutes" show that weeks before the governor's announcement, Publix donated $100,000 to his political action committee, friends of Ron DeSantis. Julie Jenkins Fancelli, heiress to the Publix fortune, has given $55,000 to the governor's pac in the past. And, in November, Fancelli's brother-in-law, Hoyt R. Barnett, a retired Publix executive, donated $25,000. Publix did not respond to our request for comment about the donations.

HARDY: It hasn’t worked better for people of color. Before, I could call the public health director, she would answer my calls. But now, if I want to get my constituents information about how to get this vaccine, I have to call a lobbyist from Publix? That makes no sense. They're not accountable to the public.

ALFONSI: Distributing vaccines is lucrative. Under federal guidelines, publix, like any other private company, can charge Medicare $40 a shot to administer the vaccine. We wanted to ask governor Desantis about the deal, but he declined our requests for an interview. We caught up with him south of Orlando.

ALFONSI: Publix, as you know, donated $100,000 to your campaign. And then you rewarded them with the exclusive rights to distribute the vaccination in Palm Beach County.

DESANTIS: So, first of all, that-- what you're saying is wrong. That's--

ALFONSI: How is that not pay to play?

DESANTIS: That-- that's a fake narrative. I met with the county mayor. I met with the administrator. I met with all the folks in Palm Beach County and I said, "Here's some of the options. We can do more drive-thru sites. We can give more to hospitals. We can do the Publix." And they said, "We think that would be the easiest thing for our residents."

ALFONSI: But Melissa McKinlay, the county commissioner in the Glades, told us the governor never met with her about the Publix deal.

ALFONSI: The criticism is that it's pay to play, governor.

DESANTIS: And, so, it's clearly not.

ALFONSI: Isn't there the nearest Publix in the Glades---