Oliver gushed about the impact of the apparently wonderful Biden administration: “It’s much more fun to do.” He contrasted, “It's not fun writing comedy from absolute despair. And for us... our show was getting sucked into dealing with the fire hose of what was coming out of that administration all the time.”

Well, how HAS Oliver handled the Biden administration and Democrats controlling everything? Let’s take a look back at 2021. A few weeks after Biden took office, he demanded Democrats have MORE power, trashing moderates like Joe Manchin:

Unfortunately, the best shot those bills have at getting enacted is if Democrats end the filibuster. And to do that, every senate Democrat would need to be on board. The problem there is, one of those Democrats is Joe Manchin.

In 2021, a scandal erupted that engulfed then-New York Governor Andrew Cuomo and eventually his CNN anchor brother Chris Cuomo. In February of 2021, Oliver briefly showed a backbone to Democrats, trashing Andrew Cuomo as an “asshole.” But over the next five episodes, as the controversy widened, the HBO host only allowed 47 seconds to mocking the Democrat.

He also found time to trash conservative Meghan McCain as a “hater.” It’s all quite the contrast to the meltdown Oliver suffered, on-air, when Trump won in 2016: “How the fuck did we get here and what the fuck do we do now?”

Oliver’s show returns on Sunday. And if you’re expecting a thrashing of Biden — for the sake of consistency — the host told Colbert on Tuesday what was coming: “So it is nice to return to do what we do best, I think, which is stories about pace loans and homelessness.”

TBS leftist comedian Samantha Bee in April of 2021 echoed the sentiment of Oliver. For anyone expecting mockery of Biden, she wondered, “Why would I purposefully undermine something that seems to be a great idea, pretty much across the board? Like, I don’t need to make jokes just to make jokes. Like, I like to make targeted jokes.”

So much for speaking truth to power.

A transcript of the brief exchange on The Late Show is below. 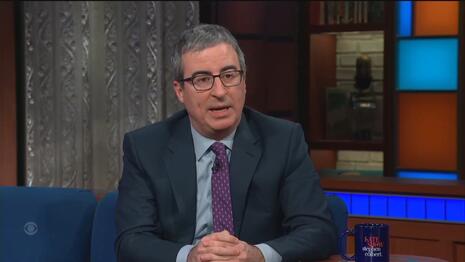 STEPHEN COLBERT: How has doing the show felt during this administration as opposed to last one? Certainly I feel a great difference in my—  in my daily focus.

OLIVER: It's not fun writing comedy from absolute despair. And for us, it's been-- even we were-- our show was getting sucked into dealing with the fire hose of what was coming out of that administration all the time. So it is nice to return to do what we do best, I think, which is stories about pace loans and homelessness.