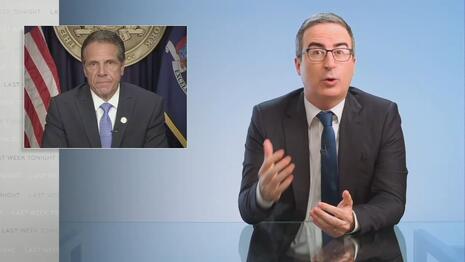 Don’t count on John Oliver to speak truth to the Cuomo brothers. The left-wing HBO hack on Sunday allowed a scant 6 seconds to the sexual abuse scandal that toppled Andrew Cuomo and embarrassed his CNN brother Chris Cuomo. This comes a week after the host allowed a mere 41 seconds to the scandal.

Here is the sum total of Oliver’s coverage on the August 14 Last Week Tonight:

It's been a busy week in Afghanistan. The Taliban now controls half of the country's provincial capitals. Here in New York, Andrew Cuomo resigned in disgrace or as Chris Cuomo might say — [Says nothing.] But I’d liked to talk about the Coronavirus.

This isn’t new though. It’s not just the sexual abuse scandal that the HBO host spun for his nursing home disaster. As I reported on March 2, 2021, Oliver barely mentioned Cuomo, cheering his “admirable’ efforts.” The host didn’t mention Cuomo's role in the nursing home debacle until February 21, 2021, thirty three episodes into the pandemic,

As I noted at the time:

I examined every episode of Last Week Tonight since the coronavirus started through February 21, 2021 – 33 episodes. The Democratic governor is only mentioned five times in over a year. All the mentions are brief and some are positive.

In the five episodes between calling Andrew Cuomo an “colossal asshole,” Oliver spent a tiny 47 seconds on the Democrat. I wrote on April 13, 2021:

On March 7, the host disposed of Cuomo in 4 seconds with this aside: “It's been a wild week, from Andrew Cuomo's scandals continuing to grow, to eight moderate Democrats killing a $15 minimum wage.”

John Oliver is not a comedic host. He’s a hack Democrat protecting the powerful.