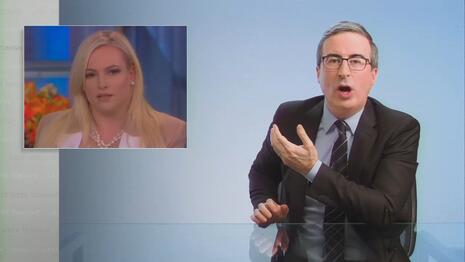 Hater John Oliver, the leftist host of HBO’s Last Week Tonight, on Sunday trashed Meghan McCain as “giving space for hate to grow” and tried to smear her as contributing to last week’s horrific shooting of Asian Americans in a spa. The idea of Oliver, who joked about shooting Christian Tim Tebow, deriding anyone else as hateful is absurd.

Yet, Oliver did that on his March 21 show, playing a 2020 clip of The View co-host saying she “doesn’t have a problem” with referring to Covid as the “the China virus” because it “did originate in Wuhan.” The HBO host raged, “Oh, good! Meghan McCain doesn't have a problem with it! Listen not to the scores of Asian-Americans telling everyone that the term is dangerous and offensive!”

He dismissed a tweet this weekend of McCain calling to “stop Asian hate,” sliming, “There has to be an understanding that saying, ‘I don't have a problem with calling it the China virus’ is very much giving space for that hate to grow.”

“I dislike Robert Mugabe. I hate Tim Tebow. If I was in a room with Tim Tebow and bin Laden and I had a gun with one bullet in it, I’d shoot Bin Laden. I’m not a monster. But if I had two bullets – I’d shoot Tim Tebow first.”

Oliver’s the same guy who seethed at Stephen Harper, the mild, former Conservative Prime Minister of Canada, saying, “Don't be deceived by his bland exterior. Where there is banality, there is evil.... But Harper's ugliest tendency is perhaps his pandering to Islamophobes.”

JOHN OLIVER: And our long, ugly history of anti-Asian racism -- and the fact it often peaks during times of crisis -- is the very reason why, just last year, many were loudly warning that Trump calling Covid names like "the China virus" was likely to lead to a rise in violence against people of Asian descent, an argument that at the time, not everyone seemed to find convincing.

OLIVER: Oh, good! Meghan McCain doesn't have a problem with it! Listen not to the scores of Asian-Americans telling everyone that the term is dangerous and offensive! Instead, gather round, and take the word of a wealthy white woman who's dressed like she's about to lay off 47 people over Zoom. Now, I will say, McCain posted this week, "Stop Asian hate" with three broken heart emojis, which is a fine sentiment to throw up on Twitter after the fact, but there has to be an understanding that saying, ‘I don't have a problem with calling it the China virus’ is very much giving space for that hate to grow.